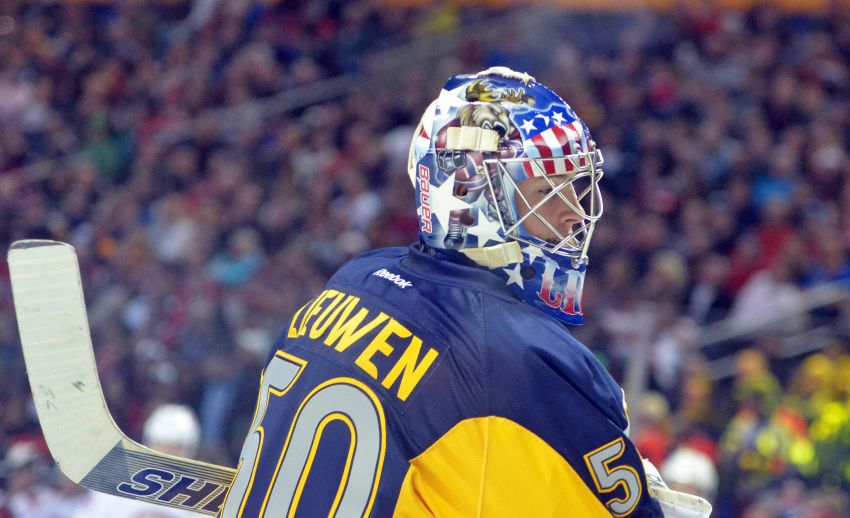 BUFFALO – A day after his surprising NHL debut, everything had settled down a bit for Sabres rookie Nathan Lieuwen.

Lieuwen said his body felt OK after playing three games in three days, a rarity for a goalie. He even remembered some of the action he faced Sunday. Memories were a blur following his 22-minute, 10-save relief appearance in the Sabres’ 2-0 loss to Montreal.

“I could remember a few more things this morning,” a smiling Lieuwen said Monday inside the First Niagara Center.

With starting goalie Jhonas Enroth sidelined by a right leg injury and backup Michal Neuvirth day-to-day with a lower-body ailment, Lieuwen accompanied the Sabres to Calgary for tonight’s contest against the Flames, the start of a season-long five-game road trip. So did goalie Matt Hackett, who was recalled from Rochester on Monday.

Update: Lieuwen will start tonight, according to reports out of Calgary.

The Sabres, losers of six straight games, have two healthy goalies with 14 combined games of NHL experience. Hackett has three wins. Lieuwen, of course, has zero.

Interim Sabres coach Ted Nolan said Enroth’s injury looked better Monday than it had a night earlier. Enroth, who behind in Buffalo, tweeted a picture of himself wearing an air cast around his right leg. The Swede was hurt when teammate Jamie McBain knocked Brendan Gallagher into him.

Nolan added: “He could wake up tomorrow morning fresh as a daisy.”

Neuvirth made 51 saves in Thursday’s 4-2 loss to Carolina and backed up Enroth on Saturday. The Sabres recalled Lieuwen early Sunday because Neuvirth couldn’t even dress.

“I can’t really tell you what happened because I don’t even know,” Neuvirth said. “I woke up (Friday) morning and I was sore.”

Neuvirth said he could’ve played Saturday, although his injury hurt on the ice.

If he can’t start tonight, Lieuwen, who recently supplanted Hackett as the Americans’ No. 1 netminder, could get his first nod.

“I have no hesitation of putting him in,” Nolan said.

The 22-year-old’s not worn out from the wild weekend.

“It’s not too bad, actually,” he said about his body. “Usually after three in three you’re a little more tired and sore. But I actually feel really good.”

In a forgettable season full of turmoil, Lieuwen’s a feel-good story. Concussions nearly cost him his career as a junior player. He was bypassed twice in the draft before the Sabres selected him 167th overall in 2011.

“That definitely took my career sideways for a while,” he said about the concussions. “(I) started to get back on track when I was 19. That’s when I was drafted here to the Sabres. Things have been up ever since.”

“What’s really helped me is my mental game, and I think it’s really improved,” Lieuwen said. “I’ve been able to overcome a lot of things, whether they happen in a game or in practice or whatever’s going on.”

Lieuwen should stay on the Sabres’ 10-day road trip. They play Sunday in Vancouver, meaning he could experience an “extra special” homecoming.

“It was kind of funny because last year when I got called up to Rochester they were going to Abbotsford (suburban Vancouver), which is where I’m from,” he said. “Now I’m here and they’re going to Vancouver, so I’m not too upset.”

“Everything’s just faster,” he said. “Everything’s harder. Everything’s better. You got someone like (Thomas) Vanek bearing down on you, that’s different than if you have someone from the AHL.”

Since the Sabres summoned both of Rochester’s goalies, the Amerks recalled Connor Knapp and Andrey Makarov from the ECHL.

The Sabres recalled Hackett briefly in October, although he didn’t play.

Winger Torrey Mitchell, acquired from Minnesota before the NHL trade deadline, should return from a six-game absence tonight after blocking a shot in his Sabres debut March 6.

“My speed’s a big part of my game,” Mitchell said. “I like to use my speed, get in on the forecheck. I’ll probably have a pretty big role on the penalty kill as well.”

“He has some moxie to his game,” he said. “He has some speed to his game. He has some maturity. He’s played some playoff games in this league. Certainly he can add some experience to a very young team.”

Meanwhile, defenseman Tyler Myers, out the last two games with an arm injury, stayed in Buffalo. He could meet the Sabres later in the trip, Nolan said.

Nolan has been using the struggling Cody Hodgson, a regular center, on the wing.

“Try to spring him,” Nolan said. “If you look at the breakaway chance he had (Sunday), he had a chance to put it in. That’s what we need to create for Cody, some opportunities for him to score some goals.”

Hodgson has two goals and six points in the last 16 games and just one assist in the last six contests.

The Sabres canceled Monday’s practice and did off-ice work, although a few players still skated.