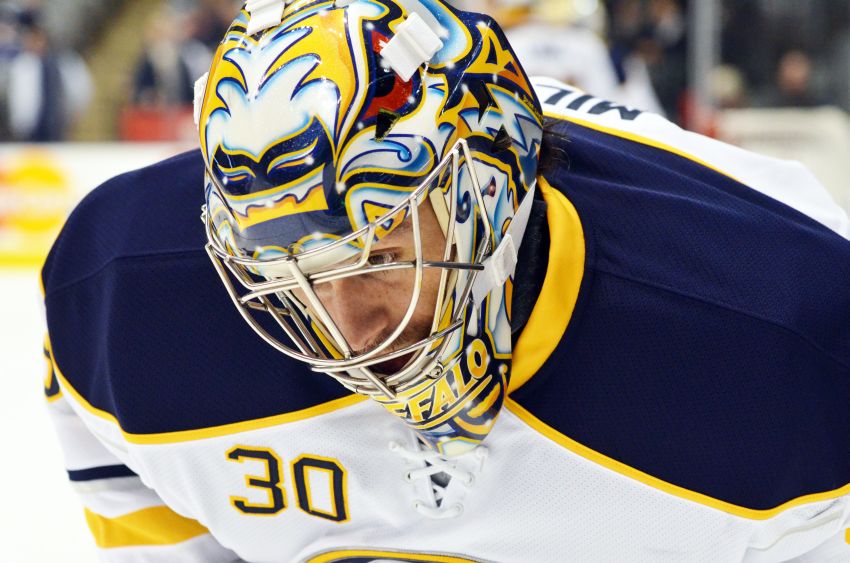 Miller, fresh off a career-best 49-save effort in Sunday’s 2-1 shootout triumph against Washington, is fine with sitting. The Sabres, like all NHL teams, have a loaded schedule this Olympic campaign.

Their tilt against the Jets, the start of a two-game road trip, begins a stretch of 19 contests over 38 days until the break.

With 28 appearances through 39 games, Miller’s on pace to play 59 times, his lowest total in a full season since 2008-09, when an ankle injury shelved him five weeks.

Miller, of course, wants to play as much as possible.

“But you have to know there are moments where you have to build yourself up off the ice and you have to take a little bit of a mental break and do your work in the gym, do your work on the ice that maybe you don’t as much if you’re playing,” Miller said Monday inside the Riverside Ice Rink.

“You get a rested Ryan Miller, you’re going to get a better player,” interim Sabres coach Ted Nolan said.

Miller’s recent play – 2-0-1 with a 1.55 goals-against average and .961 save percentage – earned him the NHL’s second star of the week, the league announced Monday.

Miller’s 10-17-1 with a 2.69 goals-against average and .927 save percentage overall, numbers that would almost certainly be better if the Sabres had supported him throughout the rough season.

He’s a virtual lock to start for Team USA at the Sochi Games in February. Enroth, meanwhile, could be one of Sweden’s three netminders.

“We need Jhonas to be ready,” Miller said. “It’s an Olympic year. We’re factoring in the possibility of more travel and playing time for maybe both of us. So the idea is to balance (playing time) out a little bit more and looking at the trend in the NHL.

“The season started thinking more about making playoffs and how that all shapes up and adds up. It means that both guys have to carry a load. You need energy to win games. You want to sustain that all year.”

A single game, even one as busy as Sunday’s, shouldn’t make the Sabres rethink their goaltending schedule, Miller said.

“You can’t just go off of one game,” he said. “You have to think about the entire season. You start to get too high on one game, you start to kind of lose the plan and lose the overall game plan. So the idea is to keep energy at a high level so you can have more game where you can factor in.

“Just learning from my past, I played 76 one year, and it didn’t do a whole lot for us.”

He played in all but six of the 82 games in 2007-08, when former coach Lindy Ruff quickly lost faith in veteran No. 2 Jocelyn Thibault and began running his franchise goalie ragged.

Miller’s play suffered. He had a career-low .906 save percentage while losing a career-high 27 games in regulation.

In years past, Miller said, he used to “get too emotionally involved.”

These days, “If I’m calm and I kind of just let everything happen, I’m more in the play and able to read situations and things work out better for me,” he said.

“So I’m just trying to dial down the emotion a little bit,” Miller said. “Not that I’m not going to be passionate about playing. Just dial it down, try not to get too involved in bad calls or caught up in what the referee’s doing or whatever the guys are doing on the ice. Focus on my game, and then dial my focus up where I’m just trying to read plays, settle myself in the net, be a little more composed on plays.”