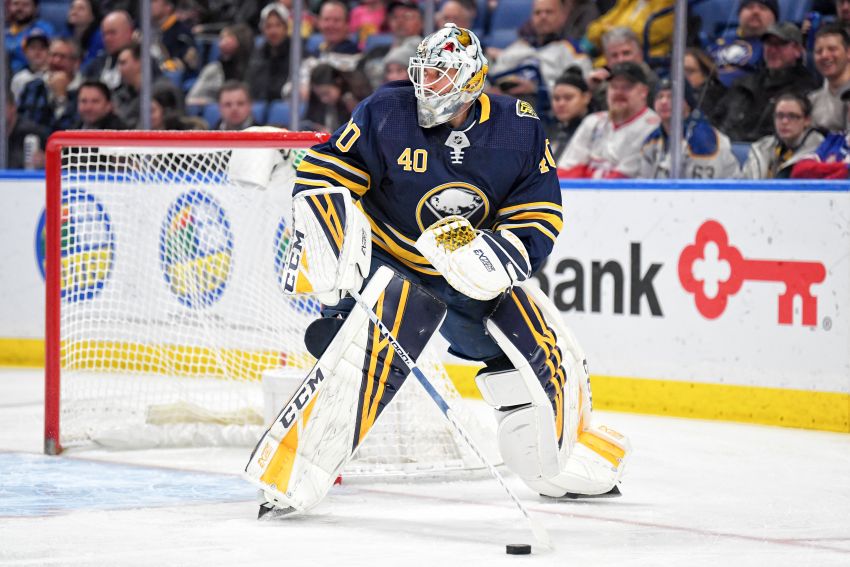 “We’re testing him at the moment as a we speak here,” Krueger said this morning inside KeyBank Center.

The Sabres also recalled goalie Andrew Hammond from the Rochester Americans on Saturday.

“He’s feeling slightly better, but the illness is still there,” he said.

Update: Hutton led the Sabres on the ice for warm-ups, meaning he will likely start. Frolik is not on the ice.

After losing four out of five contests (1-3-1) following the NHL All-Star break, the Sabres have rebounded, winning three out of the last four games, including two straight.

“The depth in the forward group helps us a lot to feel the potential of playing a four-line game, which is something we were really good at early in the season and we just never seemed to get it back since Sweden (in early November),” Krueger said. “From Sweden to now, it’s the first time we’re sitting at the lineup feeling comfortable with four lines that can play against anybody in the other group.

“So it’s a lot easier to manage rhythm versus matchups, which in the game today, it’s always a balance, when you’re home, how much do you invest in matchups and how much do you invest in the rhythm of your own team? I think we’ve done really well where we’ve been able to concentrate on rhythm and pace and let lines share responsibilities like playing up against (Auston) Matthews or (John) Tavares tonight, two of the elite lines in the whole National Hockey League.”

Tonight is the last meeting of the season between the Sabres and Leafs, who beat the Senators 4-2 Saturday in Ottawa. The Sabres are 1-1-1 against Toronto this season.