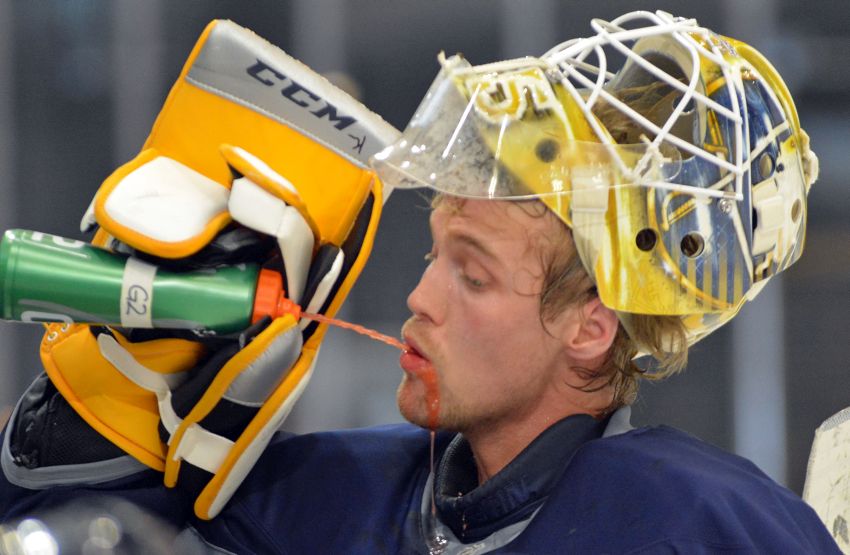 Anders Lindback has a .934 save percentage with the Sabres. ©2015, Dan Hickling, Olean Times Herald

BUFFALO – Anders Lindback likes to take a big-picture approach, so the Sabres goalie will examine his entire season when it ends. The Swede’s six-game hot streak means little to him right now.

The 26-year-old, a spare part before the March 2 trade deadline, has quickly morphed into a stud in net, posting a 2.41 goals-against average and a .934 save percentage in seven appearances (six starts) with his new club.

Lindback dazzled in his only win, making 44 stops in Tuesday’s 2-1 shootout triumph in Boston. He has a gaudy .957 save percentage in his last three outings.

“Come back after 20 more games,” Lindback said Thursday inside the First Niagara Center. “It’s one thing to play good for a little while. For me, I want to be good every night, give my team a chance to win every night. I can’t say I’m … there.”

On a rebuilding team searching for help everywhere, the 6-foot-6 Lindback, an unrestricted free agent this summer, has quickly emerged as an unlikely candidate to become the No. 1 goalie next season. Lindback has never started regularly in his five NHL seasons. Chad Johnson’s injury recently created an opportunity for him.

“I know how hard it is in this league,” said Lindback, who will likely start his fifth straight game tonight against the New Jersey Devils. “There’s only so many spots. You don’t get dealt chances. It’s only happening so often. I’m just happy for this opportunity. It’s only six games. We only won one.”

When the Sabres acquired Lindback in the Jhonas Enroth trade with Dallas on Feb. 11, he appeared to simply be a body to replace the departed netminder.

Lindback possessed some terrible numbers then, most notably an awful .875 save percentage, so fans wanted him to play instead of the since-departed Michal Neuvirth to help cement the Sabres’ 30th-place finish.

Now, those same fans want Lindback to sit because he’s playing so well.

“He’s definitely shown that he belongs in this league, he can play,” Sabres goalie coach Arturs Irbe said. “It’s short-term, there are more games to play. … He could be the starter. He has shown he can be a starter in this league, which is great.”

How has Lindback transformed his game so quickly? He said Irbe hasn’t done much technical work with him. Irbe said he made some tweaks and worked on Lindback’s strengths.

Irbe has a simple explanation for Lindback’s success.

“Anders is a total example of what you can do when a goalie works his tail off,” he said. “That’s what he has done.”

Sabres coach Ted Nolan added: “Confidence is a big thing with any athlete. His work ethic when he got here was outstanding. He paid attention to a few minor adjustments to his game.”

Lindback used his 24 days between starts – he finally debuted here March 3 – to keep “plugging away,” Irbe said. He faced a barrage of shots from teammates every practice.

“I was asking him at times, ‘OK, if you are tired, let’s take some breaks,’” Irbe said. “He just takes a deep breath and says, ‘No, no, I’m fine.’ I can tell he’s barely going, but he kept plugging away. That’s a tremendous quality for anybody in sports. … That means you are able to push when there’s not much left in the tank. That means you will be able to make those extra saves when you are peppered with 40, 50 shots a game, when you are spending 15 minutes in your own zone in a period or you are killing penalties five-on-three.

“It’s such a strong attribute. His dedication and work ethic really carried through.”

Five weeks ago, Lindback insisted he had felt fine all season. The sporadic appearances hurt him, however. Dallas coach Lindy Ruff lost trust in Lindback early.

“But I can’t blame him,” Lindback said. “I remember my second start. It was a really bad game, (six goals allowed). Obviously, in this league, you can’t afford to lose and you can’t afford bad goaltending. It’s crucial, especially when you know it’s going to get down to one or two points at the end to make the playoffs.”

Lindback couldn’t settle down when he finally played.

“It’s like you want it so much, it’s hard to stay composed and wait for it,” Lindback said.

These days, he has some calmness and rhythm in his game again.

“I’ve just kept working on small things, try to pay attention to details,” Lindback said. “But it’s hard to replicate a game in practice. I learn so much by playing every game, too. You start to read the game in a different way than when you play once in a while.”

Still, Lindback’s strong play hasn’t translated into wins, the only number he cares about. He has only three all season.

“I only care about winning,” Lindback said. “That’s why you play hockey. You can have the worst save percentage. If you’re winning, playing on a winning team, that’s all that matters, really.”