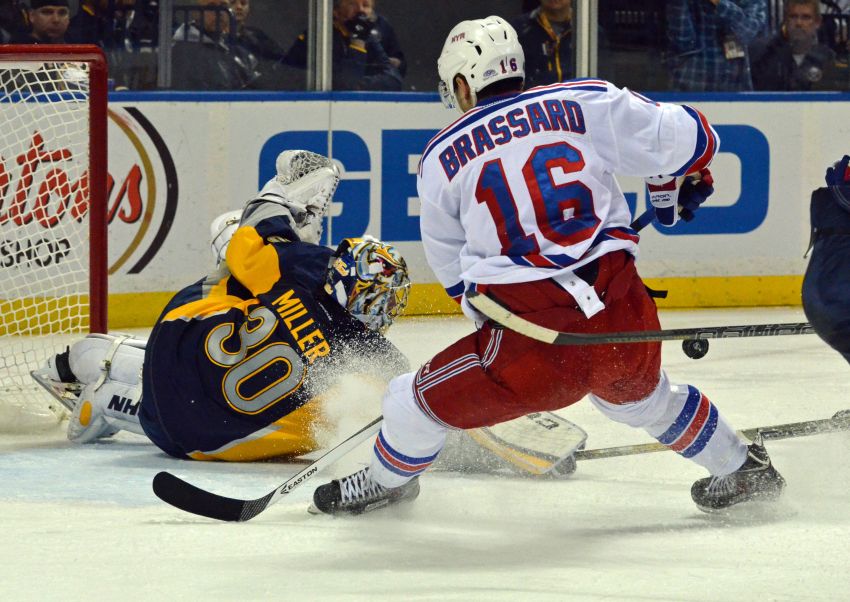 BUFFALO – Finally, about seven minutes into the third period Thursday, Cody Hodgson briefly generated some excitement for the 18,088 fans inside the First Niagara Center, slickly undressing Ryan McDonagh before roaring in on a partial breakaway.

Brad Richards scored on the ensuing power play, building the Rangers’ lead to 2-0.

It was one of those nights. One of the hapless Sabres’ best scoring chances turned into New York’s winning goal.

“Those are the type of things that are killing us, the timing of situations,” interim coach Ted Nolan said following the Sabres’ boring 3-1 loss, their seventh setback in the last eight games. “Cody goes on a breakaway, almost ties it up. All of a sudden he trips the guy, then we’re down 2-0. So it’s a momentum swing we can’t afford to lose.

The Sabres, of course, have been bad all season. They’re now 6-21-2 and have two regulation wins.

But they have been showcasing some progress under Nolan, cleaning up many of the areas that dogged them under former coach Ron Rolston.

Still, some of the same problems – goal scoring and slow starts – are biting the Sabres.

“Another day where we got to search for the answers,” Nolan said. “There’s no one (going to) ride in here and fix it for us. We have to fix it ourselves. We have to look in the mirror and what we can do to correct this thing and make it better.”

Some goals would help. Thursday marked the 15th time this season the Sabres’ feeble offense scored one goal or was blanked.

Only Tyler Ennis’ score with 2:06 left in regulation kept the Sabres from getting whitewashed a second straight game.

“It’s frustrating, but I think it comes down to getting more pucks to the net,” said Ennis, who ended his four-game point drought. “You’re not going to score a lot when you’re getting 20 shots a game.”

The Sabres had 28 shots on Thursday. They had 14 through two periods, the same number of shots the Rangers had blocked. The Sabres gave up a few prime shots for passes.

“I think tonight it was a little bit of trying to be too fancy with it instead of getting pucks to the net,” Sabres defenseman Tyler Myers said.

Their start didn’t help, either.

Instead of roaring out of the gate following their season-long four-day break, the Sabres started slowly, falling behind 1-0 17:47 into the game and sprinkling only seven shots on Lundqvist during the opening period.

They’ve now been outscored 34-6 in the first period this season.

“That’s between the ears, it’s not energy,” Sabres goalie Ryan Miller said about the team’s starts. “(We’re) cautious to start because we’ve been burned a lot.”

Miller, who made 28 saves in his 21st appearance, felt he performed poorly.

“It’s my job to give them a chance to be in the game, and I blew that part of it,” Miller said. “Not a lot of room for error.”

He wanted Rick Nash’s nifty opening goal – the slick winger zoomed by Myers and deked Miller one way before tucking the puck past his right pad – back.

“I’ve seen that play enough,” Miller said. “I should’ve had it.”

Miller said he missed an edge trying to get across the net for Richards’ score from down low along the line.

Mats Zuccarello’s late goal, a simple shot from the left circle that made it 3-0, really burned Miller, though.

“Just a terrible goal, that third one,” he said. “I didn’t trust myself with kind of where I was.”

Miller said he must play at a “certain standard.”

“That’s a one-goal game with the ability for this team to tie it late and get points out of it,” he said. “That’s the difference tonight. I thought the guys were better as the game went on.”