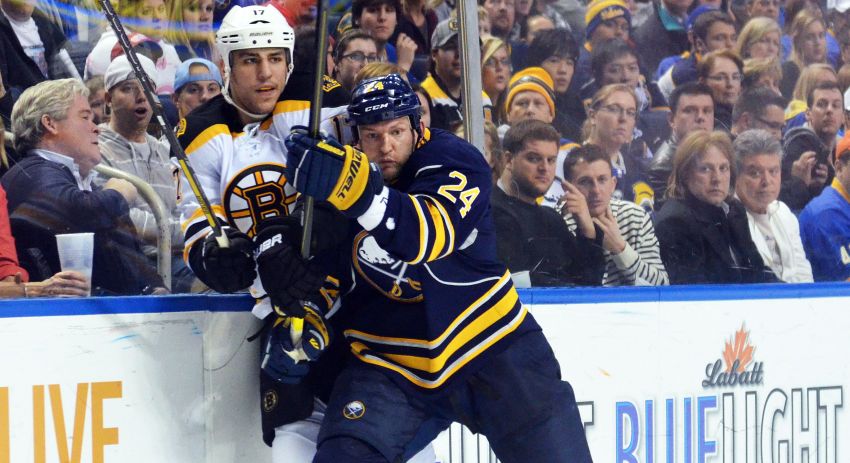 With Wednesday’s deadline approaching, had the veteran defenseman waived his no-trade clause and been dealt?

The 32-year-old was just enjoying a maintenance day off the ice.

Shortly after practice ended around noon, Regehr walked into the dressing room and said he couldn’t “say yes or no right now” about ditching his no-trade clause again, which he waived in 2011 to leave Calgary.

But Monday night, the 13th-place Sabres traded Regehr to the Los Angeles Kings for second-round picks in 2014 and 2015.

The Sabres and Regehr decided together the no-trade clause would be waived.

What possibly convinced Regehr, an unrestricted free agent following the season, to move on?

“No one’s quite sure of the timeline. But we’re certainly going to focus on next season versus this season, and this provides him an opportunity I think to challenge for the Stanley Cup.”

The Kings first expressed an interest in Regehr, someone Regier called a “high-quality” person and player, a couple of weeks ago.

They don’t have a first-round selection in June and wouldn’t dish their second, so Regier said the Sabres focused on second-rounders.

With only five defensemen, the Sabres will recall defenseman Adam Pardy from Rochester, Regier said.

TVA Sports in Montreal reported Monday the Sabres have asked the captain Jason Pominville for a list of eight teams he would refuse a trade to.

Pominville bristled Friday at the suggestion he could get traded, saying, “It makes no sense to me right now. Again, I have a contract that has a clause in it. I haven’t been asked anything.”

Constructing a new roster in season has never been his style. In more than 15 years in charge, Regier has refused to overhaul at the trade deadline.

But this year he could operate much differently. With each game, it has become increasingly evident the Sabres’ current roster will likely never get far. Regier might also be fighting for his job.

That could be why Regier said Saturday he must listen to “anything and everything” – including trading Pominville, franchise goalie Ryan Miller and prospects – to improve the Sabres, losers of four straight (0-2-2).

“I think he’s just doing his job,” Pominville said about Regier on Monday. “That’s part of his job. I mean, you have to listen to what other teams have to say. It doesn’t mean that everyone’s going to be gone.”

But some big pieces could be gone.

“Wayne Gretzky got traded, so anyone can get traded,” Pominville said.

Whatever happens, the Sabres have started piling up draft picks. They acquired a second-round choice and a conditional fifth-rounder on Saturday from St. Louis for defenseman Jordan Leopold. They also received a fifth-round selection last month from Florida for defenseman T.J. Brennan.

Sabres defenseman Tyler Myers said he wouldn’t be surprised if there are more deals.

“I don’t think any guy would be surprised,” he said. “I think we know there’s action going on right now, whether it’s going to fall through or not.”

The Sabres’ initial deal for Regehr in June 2011 fell through when he wouldn’t waive his no-trade clause. He changed his mind quickly, though, and his acquisition set off a string of high-profile moves by the Sabres, who believed they were building a contender.

Regehr, a big, stay-at-home defenseman, was viewed as a missing piece. But the 13-year veteran only had a minimal impact during his 105 games.

He will be reunited with Kings coach Darryl Sutter, who coached him with the Flames.

The deal is contingent on Regehr passing a physical.

For some perspective, the Sabres have 13 wins all season.

Even with superstar Sidney Crosby sidelined indefinitely after breaking his jaw Saturday, the powerhouse Penguins could keep rolling.

They arguably possessed one of the deepest rosters in recent memory before trading for Dallas captain Brenden Morrow and Calgary icon Jarome Iginila, the prize of the deadline hunt, last week.

“They’re deep. Obviously, they have the firepower,” Sabres winger Thomas Vanek said. “But I think what makes them different, they have a good defense, they have two good goaltenders. They got three, four lines that can score.”

Winning could be a season-charger, or perhaps a final hurrah for some veteran Sabres.

Pominville wishes they could end the Penguins’ run with Crosby playing.

“To be honest with you, if we’re going to beat them and put an end to it, I’d like to play them with their full roster and see what they bring, what they have and what they’ve been doing to have that much success,” Pominville said. “It is not good for the game. Everyone wants to see him out there.”