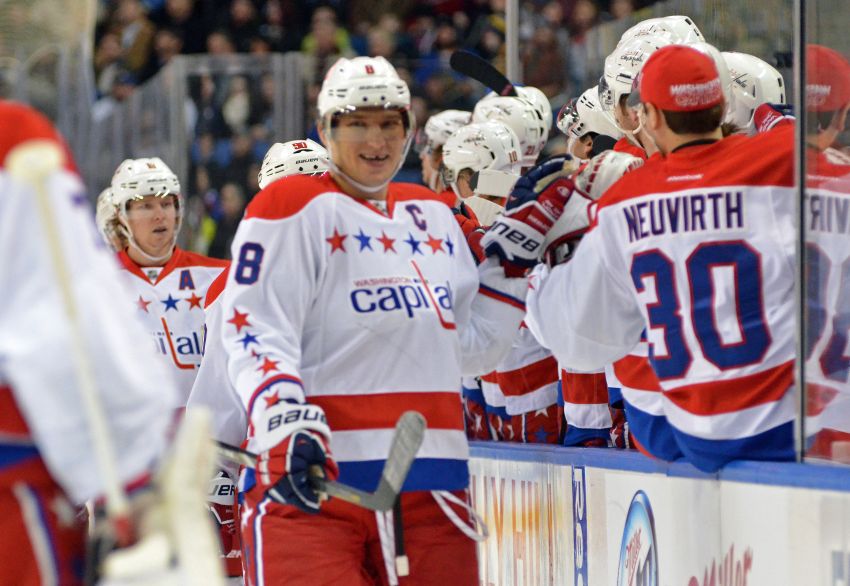 BUFFALO – Sooner or later, Alex Ovechkin had to break loose, right? Over two recent games, the Washington Capitals superstar pumped a whopping 18 shots on goal against the Sabres.

But the Sabres roared back against the potent Capitals, rallying three times and dominating late after Enroth settled down.

“We have a lot of character in this room,” center Cody Hodgson said following the Sabres’ 5-4 overtime loss before 18,923 fans.

Still, they couldn’t help Enroth, a hard-luck loser all season, earn his first win since Oct. 25.

They let Ovechkin get loose again in overtime, and the Russian dished to a pinching Mike Green on a two-on-one break one minute into the extra session.

“You just want to freeze the goalie,” Ovechkin said following a four-point night. “If the goalie wants to play aggressive you have to wait until he goes and does something. My partner on the other side has to be ready for the pass.”

Finally, the 25-year-old’s receiving some support. The Sabres hadn’t scored four goals for him all year. They scored three times in each of his last two starts, something they did only twice in his first 13 starts.

But Enroth, a Swedish Olympian, has allowed 13 goals in his last three games.

“Washington is a good team and they always have a lot of chances,” Enroth said. “I kind of knew it was going to be … a high-scoring game both ways.”

The Sabres, losers of seven of their last eight games (1-4-3), will take some solace in the consolation point for reaching overtime.

“The best thing about the whole thing (is) the way he fought back, which was a positive sign,” interim Sabres coach Ted Nolan said.

Ovechkin scored a wicked power-play one-timer in the slot before tipping Green’s shot in, his 37th and 38th goals.

“All the goalies in the league knows it’s going to come there but he still scores,” Enroth said about the one-timer.

Christian Ehrhoff pinched in for the Sabres’ first goal at 13:45. Then Hodgson’s power-play score tied it 1:41 into the second period.

Enroth, meanwhile, found a bit of a groove by forgetting about the wretched start.

“That’s part of being a goaltender,” he said. “Forget what happens and try to save the next puck all the time.”

Nolan added: “That’s going to happen in situations like that. He has to learn if it does happen like that, he’s got to battle through it, and he certainly did for us.”

Enroth couldn’t stop Green’s wraparound at 10:09. But rookie Phil Varone tied it at 11:11, his first goal in his fourth NHL game.

“Usually when I score I black out a little bit,” said Varone, who beat Washington goalie Braden Holtby from between the left circle and crease. “This one I kind of took in a little bit, just looked around.”

“When we stick together, we work as a unit we’re a tough team to beat,” said Hodgson, who had six goals and 10 points in nine games since returning from a hand injury.

The Sabres, who lost 3-0 on Monday in Pittsburgh, outshot the Capitals 13-5 during the third period.

“You look at as much positives as you can,” Nolan said. “That’s our third game in (four) nights. We’re playing a pretty good hockey team. To control the third period the way we did, you’re happy at one point. But on the other side, there’s little parts of our game that we have to continue to work on.”

The Sabres could lose Mike Weber to a suspension for their upcoming two-game road trip. The defenseman hit Marcus Johansson in the head during the second period, earning an interference penalty. Then Weber elbowed Nicklas Backstrom in the head with about a minute left in regulation.

“I think I was going for a change, that’s the only thing I know,” Backstrom said. “I mean, you saw the hit yourself, make your own judgment if that belongs in this league or not.”

Ovechkin’s overtime assist was his 790th NHL point, moving him past Mike Gartner for No. 1 on the Capitals’ all-time scoring list.

One thought on “Sabres can’t stop Alex Ovechkin, fall to Capitals in OT”