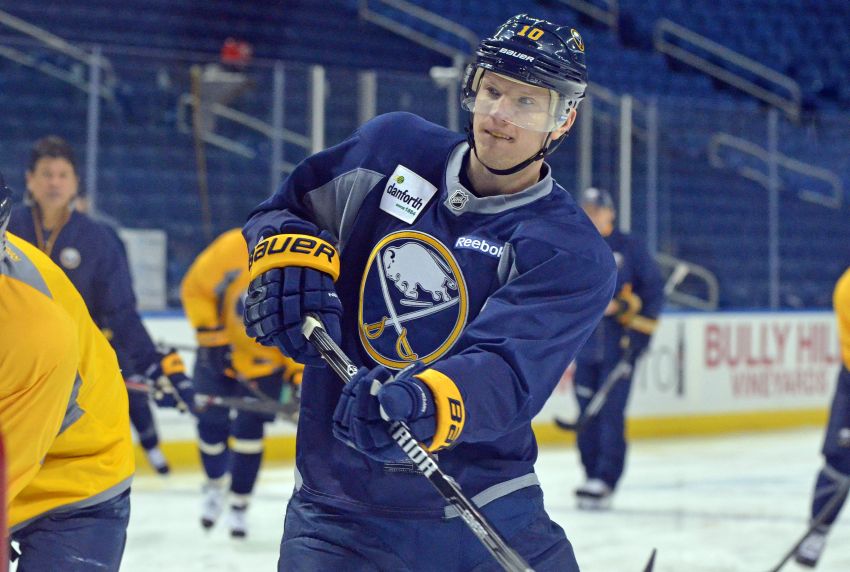 Back then, Ehrhoff thought he was joining a team built to contend for the Stanley Cup. These days, he’s playing for the NHL’s worst outfit.

To some observers, the German has looked uninterested at times this season. To interim coach Ted Nolan, Ehrhoff, one of the Sabres’ few remaining stars, began “just trying too hard.”

“Maybe I was,” Ehrhoff said Tuesday when asked if he had been pressing. “I’m always trying to help out the team. Yeah, maybe I relaxed a little bit since he said that.”

Ehrhoff, whose Sabres play in Phoenix tonight against the Coyotes, reacted swiftly to Nolan’s words.

Twelve days ago, hours after Nolan said he wanted Ehrhoff to lead and “get back to what makes him effective and not take the world upon his shoulders,” the alternate captain played one of his best games this season, skating more than 29 minutes in a 4-3 shootout loss to Columbus.

The 31-year-old minute-muncher has been performing much better lately. He had a goal and three points in Saturday’s 5-2 win in Columbus and scored after zooming in from the point in Tuesday’s 5-4 overtime loss to Washington.

Believe it or not, with eight points in his last nine games, Ehrhoff’s enjoying his best offensive stretch ever with the Sabres. It’s a big reason their anemic offense has busted out, scoring 24 goals in the last eight games.

Ehrhoff, the Sabres’ top skater at 24:06 a game, has four goals and a team-high 19 assists in 51 games this season. He averaged 14 goals and 47 points during his last two seasons in Vancouver.

“I don’t judge my game on the points,” said Ehrhoff, who’s had a steady string of partners recently. “But … we’ve scored some more goals and on the way I’ve picked up some more points, too. I think I’m still making the same plays I was making before. But now, obviously, it shows a little more on the score sheet.”

Still, the scoring hasn’t translated into wins. The Sabres have lost seven of the last eight contests (1-4-3).

“It’s definitely very frustrating,” Ehrhoff said about the constant losing. “It’s not what I had in mind when I signed here. But … I’m trying to make the best out of the situation, try to stay positive and just take it day-by-day.”

With seven years left on his contract, Ehrhoff’s name isn’t mentioned much in trade rumors. But the Sabres have already paid him $22 million and he has a salary cap-friendly $4 million hit.

Has he thought about his future?

“That’s not really in my hands,” Ehrhoff said. “So there’s not much to think about.”

Ehrhoff has felt much better about the Sabres’ future since Nolan and president of hockey operations Pat LaFontaine joined the team Nov. 13.

“I think Pat and Ted, they got a lot of experience,” Ehrhoff said. “They know what they are doing. They got a good feel for developing young players. Obviously, I hope for a quick turnaround. It’s just in the future no one knows.”

In the immediate future, Ehrhoff plans to take his wife and two young daughters to Disney World and the Caribbean during the Olympic break next month.

“It’s going to be a little tough, a little sad once the Olympics start to see those great games,” said Ehrhoff, who played in the last three Olympics.

The Sabres flew to Phoenix on Wednesday morning and didn’t practice.