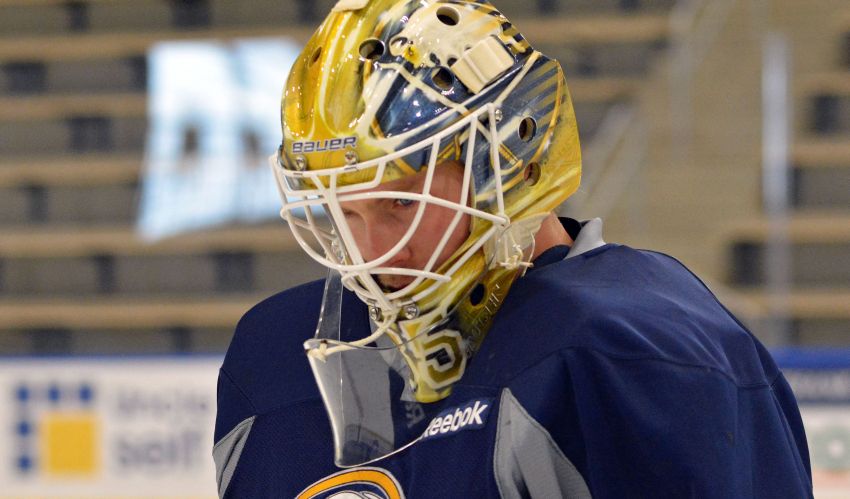 TORONTO – Let’s start with some positives from the Buffalo Sabres’ 4-3 defeat to the Maple Leafs on Wednesday, a game in which they frittered away a late lead and lost in the shootout.

– For one of the few times all season, their No. 1 line performed like, well, a top trio. Center Johan Larsson and wingers Matt Moulson and Tyler Ennis all scored three points, the first time three Sabres have compiled three points in a game since Jan. 31, 2013.

– The Sabres played perhaps their sturdiest 40 minutes on the road all season, outshooting the reeling Leafs 20-12 and leading 3-2 after two periods.

Still, against a team arguably as bad as them, the NHL’s worst club couldn’t eke out a rare road win before the 18,844 fans inside the Air Canada Centre. Late penalties, a regular occurrence this trying season, bit them.

“Again, couldn’t stay out of the box, and it killed us,” Ennis said.

After defenseman Mike Weber was whistled for a delay of game infraction, the Sabres’ third penalty in the third period, Bozak tied it at 16:35.

“Weber, I think it’s four or five times he’s (had) the right intent to get it out, but he shoots it over the boards,” Sabres coach Ted Nolan said. “It was just bad timing.”

Moulson added: “Five (total) penalties, it’s tough to take against a team with offensive skill like that. They’re going to eventually capitalize.”

The Sabres lost all five games during their road trip (0-4-1).

“They got a very skilled team on the other side,” Nolan said. “We’re limited on what we can do out there. … The guys played hard. That’s all you can ask for. I’m proud of the way the group worked.”

Larsson added: “I think we had them good.”

How bad are the Sabres and the Leafs? In their last 36 games entering Wednesday, both teams were 7-26-3. The Sabres had been outscored by 52 goals, the Leafs by 51.

The ACC, once the friendliest rink the Sabres visited, has become a house of horrors. The Leafs are 11-1 in their last 12 games here against the Sabres.

For stretches Wednesday, the Sabres were the superior team, pouncing on the Leafs and creating turnovers.

“The only chance we have going forward here is that we got to outwork the opposition,” Nolan said. “You got to be disciplined, you got to stay out of the box. And if we do that, we have a good chance, and for the vast majority of this game I thought we did that.”

Clearly, the line, which had all nine of the Sabres’ points, has created some strong chemistry in just two games together.

“Just hard work,” Ennis said. “Larry was getting in there. Matty’s always been a good forechecker all year long knocking down pucks.”

“I think he was the best player on the line,” Ennis said.