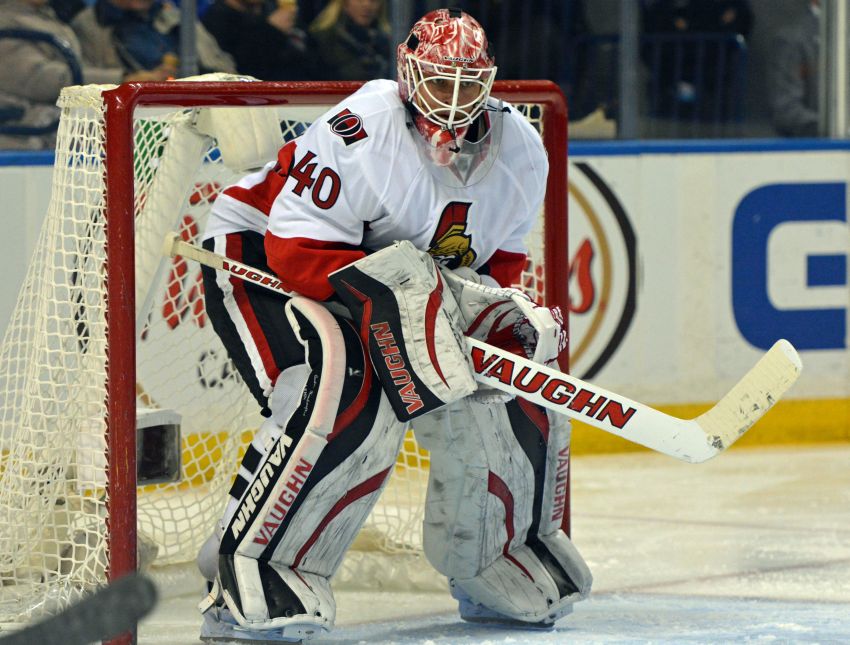 SUNRISE, Fla. – Parting with the 21st pick in a deep NHL Draft wasn’t easy for Tim Murray. With the Buffalo Sabres locked into picking Jack Eichel second overall Friday, the general manager recently told his scouts to focus on the team’s other first-round pick.

Murray wanted them to go deep and dig into those prospects.

But the Sabres desperately needed a goalie for next season. Murray had choices. Plenty of established ones – perhaps five or six – are available this summer.

Murray wanted Robin Lehner, a 23-year-old he watched up close as Ottawa’s assistant GM, to fill the Sabres’ vacancy. So Friday morning, hours before the draft, Murray traded the 21st pick to Senators for Lehner and 34-year-old center David Legwand.

“Robin was our target,” Murray said outside the Harbor Beach Marriott in Fort Lauderdale. “He was the No. 1 goalie available from our estimation.”

Earlier in the morning, Murray informed his scouting staff the pick has been traded and thanked them for their work.

The Sabres once had three first-round picks for Friday’s draft inside the BB&T Center. They only selected Eichel, one of the biggest prospects in the last 10 years. They dished the 25th pick to Winnipeg on Feb. 11 in the blockbuster deal that pried 30-goal scorer Evander Kane from the Jets.

Murray’s pleased with Buffalo’s haul from those first-round selections.

Lehner, perhaps the NHL’s most fiery goalie, quickly rose through Ottawa’s organization. The Swede only played one season of junior, cracked the NHL as a teenager and won a Calder Cup in the AHL.

“I think Robin needed a change of scenery,” Murray said. “I think he’s a very talented, big, strong man that is just scratching the surface.”

Murray said Lehner has been cleared to play and is working out in Sweden.

Lehner’s age made him attractive. He has two years left on his contract with a $2.25 million cap hit before he becomes an unrestricted free agent. Lehner is 30-36-13 with a 2.88 goals-against average, a .914 save percentage and two shutouts in 86 games.

The Sabres only had one NHL goalie, Chad Johnson, under contract for next season. Murray had to act before another team grabbed Lehner. It was the first time Murray and his uncle and counterpart, Bryan Murray, made a deal.

Tim Murray understands some observers think he paid too much.

Murray’s confident the Sabres can draft a strong prospect with the 31st pick, their next selection.

Meanwhile, the 6-foot-2, 205-pound Legwand, the second overall pick by the Nashville Predators in 1999, has 223 goals and 604 points in 1,057 NHL games. Clearly, the Sabres needed to take the veteran to make the deal happen. Legwand’s $3 million cap hit will help the Sabres reach the salary floor.