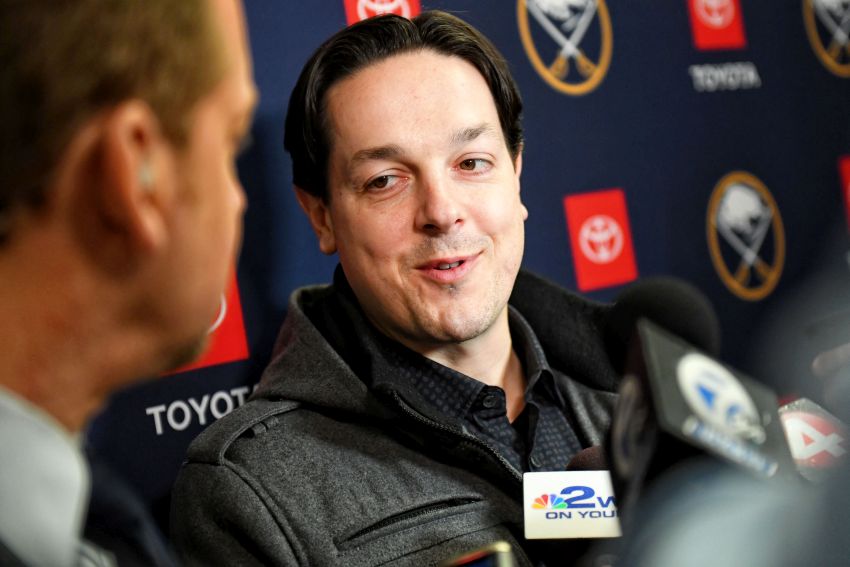 BUFFALO – Daniel Briere couldn’t believe what he heard. The former co-captain knew the Sabres have endured some lean years. But he had no clue their postseason drought started so long ago.

“That was the last playoff round for the Sabres?” Briere asked incredulously when a reporter informed him the Sabres hadn’t made the postseason since 2011, the year his Philadelphia Flyers defeated them in the opening round. “Wow, I knew the last few years were tough. I didn’t realize that was the last time. Yeah, it’s hard to imagine almost.”

Briere torched his old team during that memorable seven-game series, scoring a whopping six goals. His exploits served as another stark reminder of the dynamic talent the Sabres passed on re-signing following a 95-point season in 2007.

“I thought I was going to be a Sabre for the rest of my career, honestly, even after the season,” said Briere, who returned for “2000s Night” on Feb. 13 at KeyBank Center, part of the team’s 50th anniversary celebration. “Things happen … and I’m not trying to throw anybody under the bus. It’s done. We can’t change anything about it.”

When he returns to town, Sabres fans who yearn for the post-lockout glory days of 2006 and 2007 tell Briere and his ex-teammates how much they’re missed.

“I know it’s not an easy time right now for the Sabres, so we’ll hear a lot of, ‘Wish you were still playing,’” Briere said. “Unfortunately, I know I wouldn’t be able to keep up any more. I’d probably be able to give you guys about a shift and then I’d be done.”

Briere, who looks like he’s still in playing shape, retired in 2015. While he never won the Stanley Cup, he made the final with the Flyers in 2010 and reached the Eastern Conference final with the Sabres in 2006 and 2007.

“We were so close to winning it all,” Briere said. “Those are the things that always stay with you. We had a close-knit team. (When) we’re all seeing each other, it feels like we never left each other.”

The night before the Sabres celebrated their fourth decade, Briere and four ex-teammates – Eric Boulton, J.P. Dumont, Jay McKee and Jason Pominville – got together for dinner at 7:30 p.m.

Briere said: “The dinner kind of lasted a little longer than expected.”

Surely they talked about the stacked 2005-06 team, which emerged from the lockout as a heavyweight. Briere believes that club, which played Game 7 against the Carolina Hurricanes with only two regular defensemen, possessed the talent to win the Cup.

“When I look back, still to this day, I felt we were the team out of the last four teams remaining that we were the best,” Briere said. “I realized along the way to win the Stanley Cup you need more than just a good team, you need some breaks to go your way. It didn’t happen that year.

“I wish we could’ve had a few more cracks together at it. Unfortunately, it didn’t happen. But that’s definitely the year, when I look back, that I felt it was really close.”

Briere doesn’t want to speculate on what the current team must do to improve.

“You look at the top-end players that they have, there’s definitely a recipe to have a great team here,” he said.

These days, Briere works in the Flyers’ front office. He’s only involved in the business side, meaning he doesn’t make hockey decisions on the NHL side.

As part of his responsibilities, he serves as vice president of operations for the Maine Mariners, an ECHL team Comcast Spectator, the Flyers’ parent company, owns.

“Honestly, I’m having a blast, gaining some experience,” said Briere, who has been taking college business courses. “One day I hope I have a chance to do the same thing at a higher level. … I didn’t think I would have as much fun doing it off the ice as I had when I played.”

Briere said the job allows him to “pretty much do everything.” He commutes from Philadelphia to Maine about twice a month.

“I oversee the business side, so I’m involved with ticket sales, corporate partnerships, marketing – all that stuff, strategy,” he said. “And on the hockey side, I also act as the GM, so it’s finding the players, the coaches. We have a salary cap to follow. So actually it’s a lot of fun. We don’t have a big, big staff, so everybody has to do many, many jobs. But that’s what minor sports is. So it’s a great experience.”

The Mariners are affiliated with the New York Rangers, whose AHL team, the Hartford Wolf Pack, is run by Chris Drury, Briere’s old co-captain. Briere said the friends talk two or three times a week.

“It was a huge honor to just have the chance to share that with him,” Briere said of the captaincy. “So we had a special bond because of it, we shared a lot of things, and it’s something that will always stay between us.”