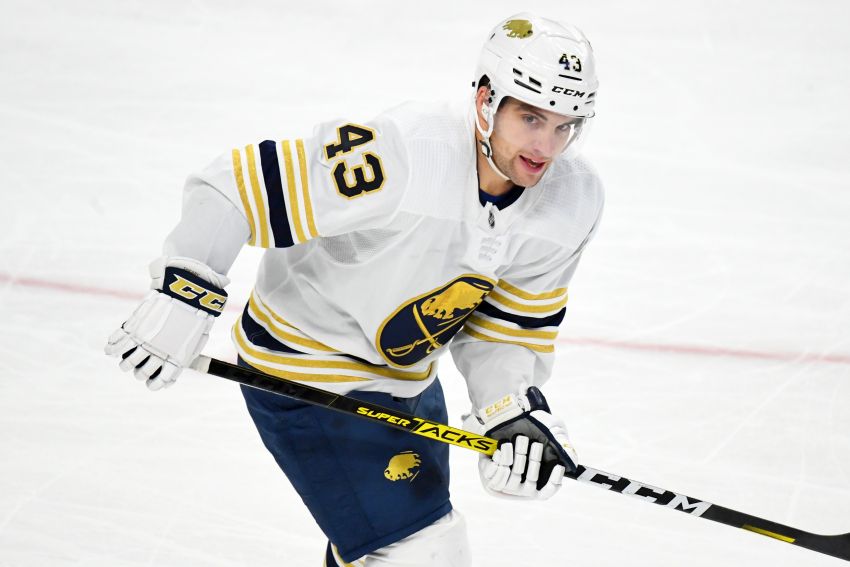 BUFFALO – Over the past week or so, the Sabres settled down and started showcasing some of the early-season form that made them one of the NHL’s heavyweights.

Their ability to play tighter defense helped them consistently generate more offense. While it had only resulted in two wins, it felt like the Sabres could bust out soon.

Luckily for them, the hapless New Jersey Devils visited town.

In its 22-year existence, around 2,700 periods of regular-season hockey have been played in KeyBank Center. The Devils’ utterly pathetic performance early Monday was arguably the worst period ever played here.

“The last six games before this really had been games of good habits and a lot of the offense that we were starting to create hadn’t really functioned that well with goals,” Krueger said after the Sabres moved into third place in the Atlantic Division. “I thought we had a deserved first period, kind of like the fruit of the labor from the week before almost seemed to pay off.

“We were hot and I thought they did a good job of managing it with 5-0. We haven’t been in that position before.”

Just 2:46 into the game, the Devils left Sabres captain Jack Eichel, one of the NHL’s most talented players, wide open in front of goalie Louis Domingue.

That goal, Eichel’s team-leading 17th, was a harbinger for the rest of the period.

Sabres winger Jeff Skinner made it 2-0 at 4:59 before winger Conor Sheary scored the first of his two goals, ending a 19-game drought going back to Oct. 17.

Sheary scored again about 10 minutes later after Domingue stopped the puck but deflected it into his net.

Meanwhile, the announced crowd of 15,422 reveled in the offensive display, counting up the goals and demanding more.

“What we really did good was when we scored a couple goals there we just stayed with the game plan and kept going, kept going,” Asplund said. “Five in a period, it just shows what character we have in this team.”

Asplund scored in front of his parents, who flew in from Sweden.

Goalie Mackenzie Blackwood replaced Domingue for the second period. Not that it mattered much.

Winger Victor Olofsson put the Sabres up 6-0 before the Nico Hischier scored the Devils’ only goal.

What has changed for the Sabres, who had been in freefall, over the last six games?

“We really feel like we’ve settled into a game that’s pretty consistent without the puck, and that’s what all the hard work was about was making sure that we understand what we need to do defensively to be strong as a team and give ourselves a chance every night,” Krueger said. “Now it looks like habits are starting to show up versus always having to process every single step during a game.

“It’s happening more naturally now and that does definitely free you up on the offensive side.”

Sheary had been creating some offense beside Skinner and center Johan Larsson, his new linemates. In Saturday’s 2-1 overtime road loss to the Toronto Maple Leafs, Sheary appeared to score, but replays couldn’t overturn the no-goal call on the ice.

“It was good to get it out of the way early tonight,” Sheary said. “Although I’ve been struggling to score, I think I’ve been doing a lot of good things and our line’s had some chemistry so it was only a matter of time, and I got some puck luck tonight.”

The Sabres’ seven-goal outburst, their highest total since they shellacked the Devils 7-2 on Oct. 5, overshadowed goalie Linus Ullmark’s career-high 44-save performance.

The Devils, believe it or not, pumped 21 shots on Ullmark in the second period.

“He played really well,” Olofsson said. “They had a lot of good, really high-quality scoring chances. He kept the numbers down.”