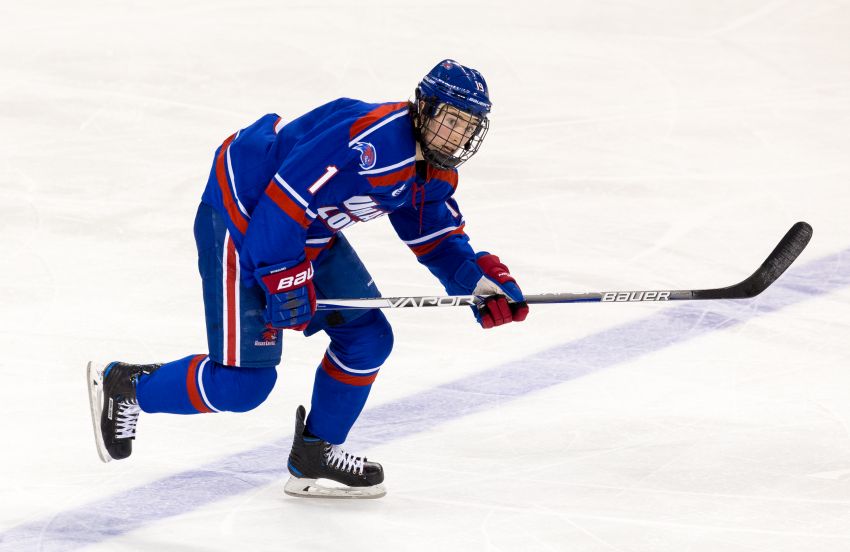 BUFFALO – The play will be seared in Sabres rookie C.J. Smith’s memory the rest of his life.

Halfway through Smith’s NHL debut, Sunday afternoon’s 4-2 loss to the New York Islanders, the speedy winger grabbed Evander Kane’s pass just outside the blue line and zoomed into the zone on a two-on-one.

Smith then dished a backhand saucer pass to Kane, who beat goalie Jaroslav Halak for his team-leading 27th goal. Just 10:08 into his first game, Smith, a 22-year-old Iowan who signed a two-year contract Thursday, had his first NHL point.

“He made a pretty good pass, and then I just heard him calling,” said Smith, who played his final NCAA game with UMass Lowell last week.

At that point, having tied the game at 1 and holding a 9-0 shot advantage in the second period, the Sabres seemed to have all the momentum before the capacity crowd of 19,070 fans inside KeyBank Center.

But the excitement was short-lived. Before the PA announcer could finishing reading Kane’s goal, Islanders rookie Joshua Ho-Sang beat goalie Robin Lehner on a breakaway.

The Islanders had their first shot of the period and another lead.

“The second period’s kind of indicative of how the game went,” Sabres coach Dan Bylsma said. “We had 15 shots and they had one (halfway through), but their one was the breakaway Ho-Sang scored on. The third period was very similar.”

Zemgus Girgensons tied the game 5:17 into the third period, but two sloppy Sabres plays – defensemen Dmitry Kulikov and Jake McCabe gave the puck away around their net – created two third-period goals for Anders Lee, his 30th and 31st.

“It was exciting to get the first one out of the way (and) … get a point, but it’s not really the way you want to start,” Smith said.

The Sabres started the game poorly. Thanks to a scheduling quirk, they enjoyed five days between games, a rarity in a season that has been jam-packed thanks to the World Cup of Hockey and the new bye week the NHL instituted.

Clearly, they were rusty. Lehner played one of his worst games this season, making only 22 saves. Cal Clutterbuck beat him over the right shoulder from the right circle 9:31 into the game.

“I’ve got to have the first goal of the game back,” Lehner said.

“If one goal sets a bad tone, we shouldn’t be in this league, end of story,” he said. “It happens, I think I made some good saves for the rest of that period and even after that breakaway. I think I bounced back, the team bounced back. It’s one goal, so that’s not how it works.”

Sabres captain Brian Gionta added: “We came out sloppy. That first was not our best.”

Lee scored his first goal at 9:19, beating Lehner from the point after the goalie knocked the puck to him following Kulikov’s gaffe. Lee scored again at 14:33.

Despite the miscues, Bylsma said the Sabres limited the Islanders to only 10 scoring chances, his team’s lowest total in about 30 games.

Perhaps the Sabres can carry that into tonight’s game against the scorching Toronto Maple Leafs, their fiercest rival. Sunday’s game had a drab atmosphere.

Now, the Leafs, who have won three straight contests, are close to clinching their first playoff berth since 2013.

“The atmosphere in the building last game against the Leafs was a lot different than we’ve had all year,” Bylsma said. “I expect it (again tonight) when they’re coming in here.”

“In the second and the third he showed some jump, he showed some shiftiness,” Bylsma said of Smith. “He did a nice read on stepping to the middle (on the goal).”

Smith, who had about 13 family members and friends in attendance, said he felt “a little tense” in the first period.

“But once I was able to find my feet, find my time and space, I felt my game got a little better,” he said.