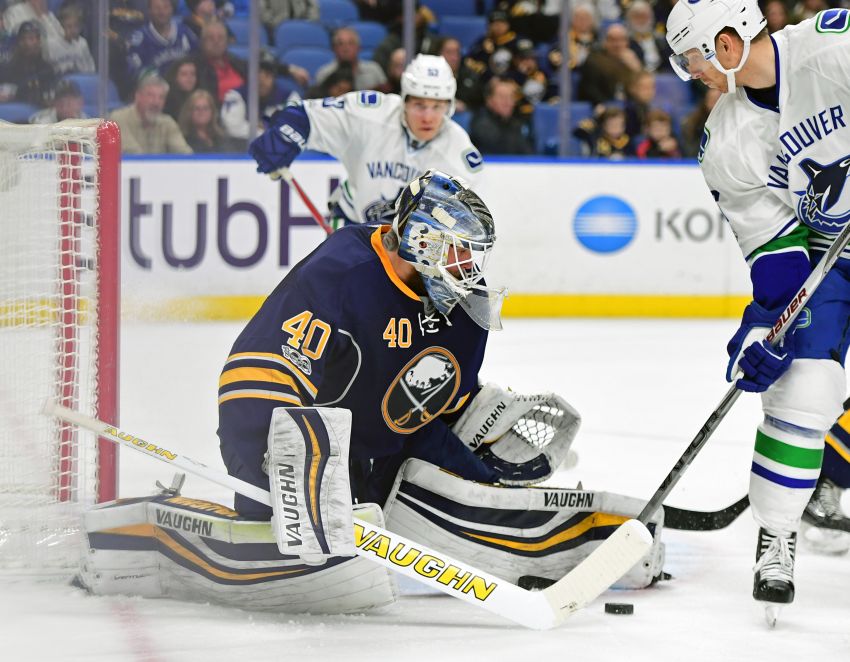 BUFFALO – At this point, with the Sabres reeling from another ugly loss, Robin Lehner said he’s not even disappointed anymore. No, following Sunday’s 4-2 setback to the Vancouver Canucks, the goalie’s angry, upset his team’s so “disrespectful” about following orders.

In a memorable postgame interview after a wretched second period doomed the Sabres again, Lehner passionately called out his teammates for a slew of problems that have dogged them all season.

“This is all talk,” Lehner said. “We’ve got to look ourselves in the mirror here. I think it’s disrespectful when we have a game plan, we’re going through things. The last few days we’ve just been going through on how to play our second period. Coach brought it up there, coming up with a good game plan. We do the exact opposite.

“We don’t do what he said and that gets me angry, I think it gets a lot of guys angry. ‘Disrespectful’ is the word.”

To Lehner, the issue is maturity. The young club still can’t consistently play within the structure needed to succeed in the NHL.

“Look at the veteran teams,” Lehner said. “It’s not science. The good teams out there, they do the same thing over and over again and when things happen, when things get a little bit too much, they fall back on the structure. The structure bails them out.

Those comments seem to be directed at some of the Sabres’ talented young players.

Other than Sabres captain Brian Gionta, who won a Stanley Cup with New Jersey in 2003, the team’s players “haven’t done anything in this league,” Lehner said.

“Gio’s won a cup, all the respect to him, he’s done something in this league,” he said. “The rest of us, we haven’t. End of story. We’ve got to stop thinking after we win a game we’re Chicago or Boston or who we think we are, I don’t know. But it’s time.

“It’s time to realize that we’re a grinding hockey team that’s got to follow the structure and start listening to our coach and start respecting this team and respecting our coach.”

Is Lehner confident the team’s myriad of problems can be corrected?

“It has to,” he said. “At the end of the day, this is a business. I really like everyone on this team. I really like this organization. But you don’t put up results things happen. I’ve been a part of that in Ottawa and it’s not a fun feeling. It’s time for us to wake up from the bottom of our whole lineup. Reality’s going to come real quick if we don’t figure it out and that’s how it is. You can’t hide from it.

“This building, these fans, they deserve better. Our coaching staff deserves better. And at the end of the day, it’s only the guys in this room, it’s no one else’s fault. Play decent for one period, that’s not how it’s done. You do it every shift, every shift and then if you lose the game, you lose the game and it happens. This is not going to hold up.”

As the Sabres have proven over the years, the second game of a back-to-back set can be downright dreary, especially if both teams played the day before.

But Sunday’s tilt featured some early action, as the teams combined for four goals and nearly brawled during a passionate first period before the 18,876 fans inside KeyBank Center.

For a while, it appeared the Sabres, fresh off Saturday’s 3-1 win in Toronto, might start that winning streak they’ve been talking about going on for weeks.

Up 1-0, Lehner and Alexandre Burrows nearly fought when the Vancouver pest got in Lehner’s crease. After they were separated, Sabres defenseman Justin Falk zoomed in and leveled Burrows.

“You protect your teammates,” Falk said. “I didn’t really see how it started or escalated. I was (going) for a line change. I turned around because the crowd was kind of making some noise.”

Bo Horvat tied the game with Falk off for roughing.

Lehner said the Sabres made “two plays” against the Canucks, their first-period goals from Tyler Ennis and Kyle Okposo.

How bad are the Sabres in the second period? Opponents have outscored them a stunning 62-40 this season.

“The second period was a script of which we know about and got to learn how to play in the second period,” Bylsma said. “We had two long shifts, turned the puck over.”