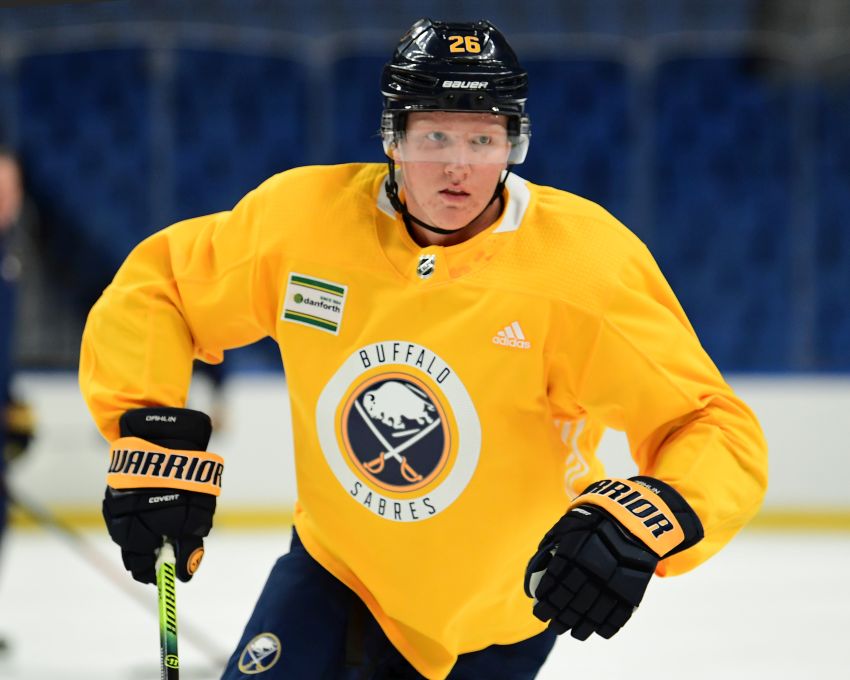 Rasmus Dahlin has had a strong offensive start this season. ©2019, Hickling Images

BUFFALO – Having already produced seven points through five games, Rasmus Dahlin could be in the early stages of the greatest offensive season ever enjoyed by a Sabres defenseman.

Dahlin, of course, will likely cool off. At his current pace entering this afternoon’s home game against the Dallas Stars, he would score 115 points over an 82-game campaign.

Only five NHL defensemen have ever recorded a 100-point season. The last one, Brian Leetch, hit the milestone in 1991-92.

Still, Dahlin could certainly threaten Phil Housley’s franchise record of 81 points by a defenseman set in 1989-90, especially with the Sabres’ power play clicking this season.

The early production – one goal and six assists, including five points on the man advantage – underscores the dynamic talent Dahlin has become just 87 games into his NHL career.

Fresh off a nine-goal, 44-point rookie season, the Swede has quickly shown signs of offensive growth.

“I feel like I’m more comfortable with the puck, but also I like to shoot the puck, too,” Dahlin said Sunday inside KeyBank Center. “I shoot it a little bit more. The forwards, they don’t know if I’m going to shoot or pass. Everything, it’s better overall.”

It can be easy to forget, but Dahlin just turned 19 in April. He’s still a raw kid playing a demanding position.

He’s far from a finished product. His defensive play can be suspect.

Sabres coach Ralph Krueger benched Dahlin for the final 8:23 of regulation in Friday’s 3-2 shootout win over the Florida Panthers.

Krueger, who played Dahlin again in overtime, has downplayed sitting out Dahlin late in a tight game.

“There’s too much focus on that right now,” Krueger said. “We had a game-closing strategy. That could be different the next game and different in two games. There’s no time for feelings here when we’re reducing.”

Dahlin understands why the Sabres utilized other defensemen late.

The former first overall pick said Jake McCabe and Rasmus Ristolainen “were really on fire in the D-zone,” so assistant coach Steve Smith, who runs the defense, “could trust them a lot in that situation.”

“Nothing really crazy,” said Dahlin, who has been partnered with newcomer Colin Miller this season.

Dahlin’s ability to listen and evolve has been perhaps the most underappreciated aspect of his development.

“He is so coachable, and he wants to be the best possible player in this league that he can be,” Krueger said. “He’s listening. The important thing is that we find the balance so that his offensive creativity is always evident in our five-on-five and our power play.”

Youngsters of Dahlin’s caliber often adjust slowly to the defensive side of the NHL. Before they entered the league, they had the puck all the time, so playing without it wasn’t a huge worry.

“We coaches … have to be hard on them on the game without the puck,” Krueger said.

Krueger said the challenge is doing that without taking away the “genius” of the player. He experienced that with the Edmonton Oilers when he coached future Hart Trophy winner Taylor Hall.

“To have a player like that and finding those boundaries and those limits that you want him to go to so his genius doesn’t get tapped by our defensive needs, that’s what we’re working on with Rasmus,” Krueger said.

The 6-foot-3, 193-pound Dahlin said being “heavy in the battles in the corners” has been the most difficult challenge of playing without the puck.

“For my body, as easy as it is for Risto, I just have to use my brain a little bit more than he has to because he’s stronger,” he said. “I have to try other stuff.”

Krueger mentioned a defenseman of Dahlin’s caliber someday playing 25 minutes a game, an elite level he hasn’t ascended to yet. He has averaged 18 minutes, 28 seconds an outing this season.

Whatever happens, Dahlin, who has been hard on himself in the past, is learning to move on quickly.

“I’m 19 now, so I’m more mature,” Dahlin joked. “No, I mean, I grew from last year, too, and really understood how important it is not thinking too much about the game that you played. It’s 82 games. It sounds cliché but it’s true.

“Of course, sometimes when I get (ticked, Miller’s) like, ‘Yeah, just shake it off. Go out there and do the same thing and try it next time.’”