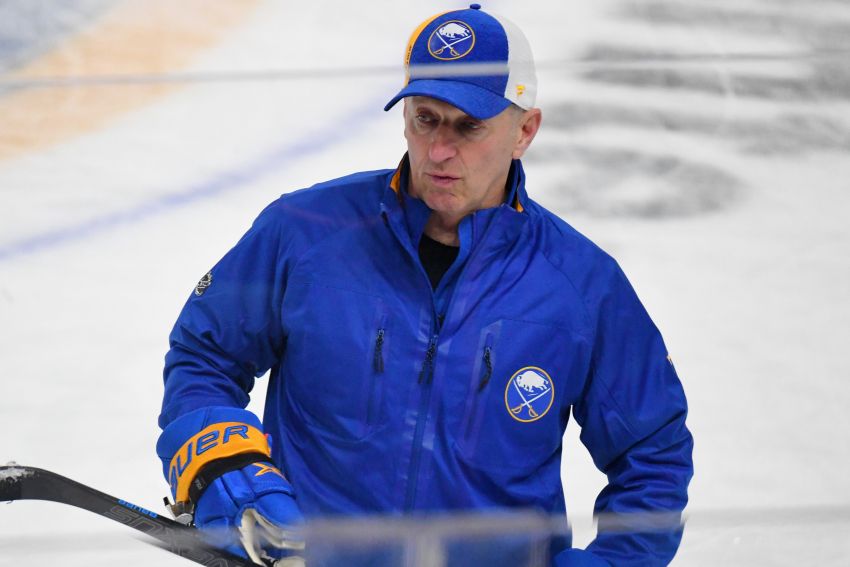 BUFFALO – Ralph Krueger only stayed on the ice about 15 minutes. After the Sabres coach chatted with several players and exchanged some fist-bumps, he left and watched Sunday’s practice from the KeyBank Center stands.

But just having an opportunity to touch the ice for a spell and enjoy some brief interactions helped recharge Krueger, who tested positive for COVID-19 on Feb. 4.

“Just this morning, when the players arrived and we passed each other, and getting out on the ice for a few minutes gives you so much energy back,” Krueger said on a Zoom call following the session. “You know why you’re here. You love the group you’re working with and the potential of the group and the individuals. …

“It was outstanding to be back on the ice, to be around the players and the staff. … I get a surge of energy right now just even talking about it.”

The Swede said he did not test positive and quarantined because of a possible exposure. His roommate, Sabres forward Casey Mittelstadt, is on the absences list.

Dahlin, who plans to play tonight against the New York Islanders, said he and Mittelstadt have been separated.

“I just stayed in shape, worked out just to keep up with the other guys and be ready for the game,” Dahlin said of his time at home.

So far, the NHL has removed two Sabres players on the absences list. Seven are still on it.

Meanwhile, Krueger, 61, said he wants to gauge how he feels this morning before deciding whether he’ll step behind the bench tonight. If he can’t coach, assistant Steve Smith, who has been running the practices for Krueger, will lead the Sabres.

“I’m definitely feeling better,” Krueger said. “I had moderately severe symptoms. I never did end up having a fever, but I did end up with a lot of aches and sleeping and fatigue for more than a week. Definitely time to realize how lethal this COVID is. Everyone knows I try to keep myself in good shape and manage that part of my life. (I’m) just really pleased in the last few days to get back to feeling more normal. I’ll take it a day at a time.

“Today was an excellent day to spend with the staff and with the players. I went soft on the ice, but otherwise, really trying to go through a regular day.”

Krueger said he’s grateful his wife, Glenda, did not test positive for COVID-19.

“A bit of a miracle in itself,” he said.

Krueger said he’s “scarred by the experience” of having COVID.

“Grateful to be one of the people coming out of it by the looks of it,” he said. “And really pay my respects to the people working in the medical care, and then for the many families who didn’t have success in dealing with it the way I have. Our medical team has been amazing in the support.”

Krueger, like his players and general manager Kevyn Adams, refused to blame anyone for the Sabres’ COVID problems.

The Sabres haven’t played since their two-game set against the New Jersey Devils on Jan. 30 and 31.

The NHL postponed four Sabres games on Feb. 2, the same day it placed Hall and defenseman Rasmus Ristolainen on the absences list.

The league instituted a slew of new COVID protocols Thursday.

“I’m happy the NHL has been as constructive as possible in learning from the experience that we had,” Krueger said. “So it seems to make it worthwhile. … We feel the new protocols … are protecting the athletes and the staff members. They are protecting the game that we could carry it out through the rest of the season.

“What happened on that weekend, obviously, it’s quite clear the information that we had just a few days after and what the NHL had at that point, there was a big divide between what they knew and what they then knew. What happened, I think that’s been chewed on all levels. For us, it’s really what is the reaction? And the reaction has been strong and supportive and constructive. We can now concentrate on getting the season started again.”