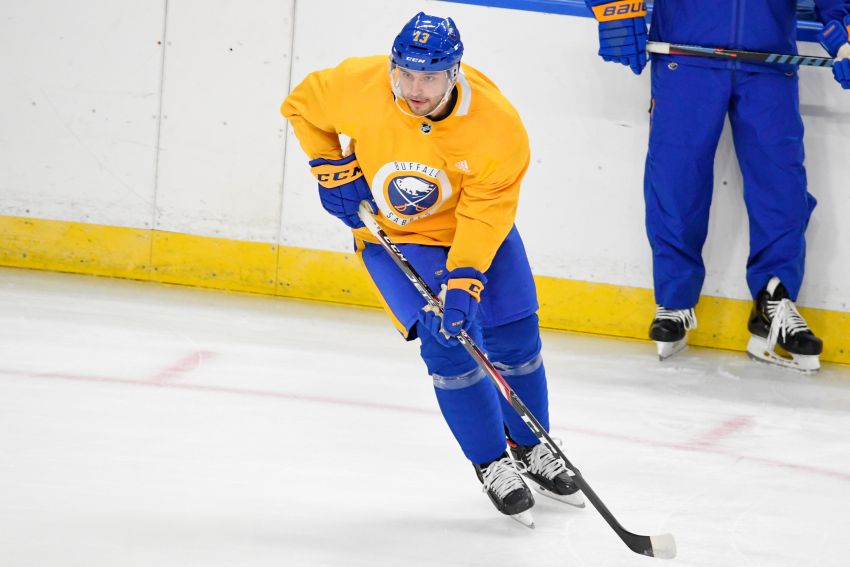 Now, will they play tonight against the New York Islanders at KeyBank Center?

“They remain day-to-day candidates and we’d like to consume, digest what happened here this morning,” said coach Ralph Krueger, whose Sabres haven’t played since Jan. 31.

Krueger said roster decisions will be made later today.

Update: The Sabres late this afternoon recalled winger Steven Fogarty and defensemen Will Borgen and Brandon Davidson from the taxi squad and reassigned forwards Rasmus Asplund and Andrew Oglevie from the AHL to the taxi squad.

McCabe and Montour skated as a pair this morning and went through extra work after the team session with Matt Ellis, the Sabres’ director of player development. That, of course, is a sign they possibly won’t play tonight.

Rieder, meanwhile, skated in his regular spot at left wing beside center Cody Eakin and Kyle Okposo and said he feels well enough to play tonight.

The German was stunned to learn he tested positive.

“When I got the news, I was actually a little shocked, that can’t be right, like I’m not feeling anything,” Rieder said on a Zoom call. “But sure enough, a couple hours after I could feel the symptoms.”

Rieder said he endured a rough day or two. McCabe said he had symptoms for about five days. Montour said he felt symptoms and experienced “a pretty tough couple of weeks there.”

Stay tuned for more updates. Sabres winger Sam Reinhart, who missed the last two games before the Sabres’ COVID pause with an upper-body injury, did not skate this morning.

“We’re managing an issue there and what we’ll do is make the final call tonight,” Krueger said of Reinhart’s status. “But there’s still a chance for Sam to be in the lineup.”

Rasmus Asplund, who was recalled from the Rochester Americans, skated in Reinhart’s place at right wing beside center Eric Staal and Taylor Hall.

If McCabe and Montour can’t play, Will Borgen and Brandon Davidson will likely replace them.

Winger C.J. Smith, who subbed in Rieder’s spot over the weekend, wasn’t on the ice this morning.

Krueger, who returned to the Sabres on Sunday after testing positive for COVID-19 Feb. 4, said he plans to coach behind the bench.