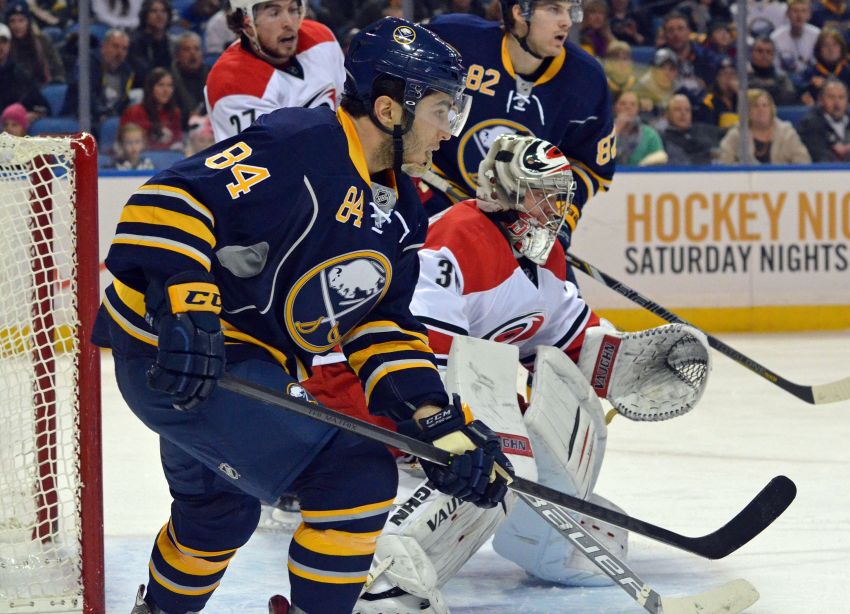 BUFFALO – The voice on the other end of the phone was excited. For a moment, Tony Varone thought his son, Sabres center Phil Varone, had been in a car accident.

“I said, ‘Is everything OK?’” the elder Varone recalled a day later inside the First Niagara Center.

Phil Varone, who nearly shunned the Sabres to play hockey for the University of New Brunswick in 2011, was calling with good news, though.

“He said, ‘Yes, yes, I just got called up!’” Tony Varone said prior to watching his son record an assist in his debut, the Sabres’ 5-3 loss to the Carolina Hurricanes, their fifth straight defeat.

He then called his wife, Helena, and told her their son was going to the NHL.

“I said, ‘Are you kidding me?’” Helena Varone said. “I think time stopped pretty much. My office co-workers all heard me get a little emotional. So it was quite a moment.”

On Tuesday, the day before her son’s recall, she celebrated her birthday,

The 23-year-old had no clue why Chadd Cassidy pulled him off the ice during practice. He thought perhaps he had been traded or the coach just wanted to discuss this weekend’s games.

“When he told me the news, it brought some tears to my eyes,” said Varone, the Americans’ leading scorer with 33 points in 38 games.

With about 30 family and friends from Ontario among the 18,468 fans, Varone skated 10:36 between Brian Flynn and Marcus Foligno against the Hurricanes. He assisted on Flynn’s second-period goal and nearly converted a one-timer from Foligno earlier.

“I liked him,” interim Sabres coach Ted Nolan said. “I thought he played well and made some good plays out there. He was probably a little nervous his first game.”

“A little bit,” he said. “There was once or twice in the first period I came off the ice and kind of saw stars a little bit. I don’t know what it was, maybe adrenaline.”

Despite playing the night before in Philadelphia, Carolina had plenty of adrenaline, coming back from three one-goal deficits.

Tyler Ennis’ goal 48 seconds into the third period put the Sabres up 3-2. But Alexander Semin’s second score tied it at 7:25 before former Sabres defenseman Andrej Sekera beat goalie Jhonas Enroth from the point at 9:50. Jiri Tlusty added an empty-netter.

“Like everybody else, he could be a lot better,” Nolan said about Enroth, who stopped 28 shots and is now 1-10-4 this season.

With the Sabres mired in 30th place and battling another funk, Varone will probably play again Saturday in Columbus.

“The best part about it, he’s earned everything he’s been given,” Nolan said Thursday morning.

San Jose drafted Varone 147th overall in 2009 but never signed him. After maxing out his Ontario Hockey League eligibility – he had 33 goals and 81 points in 55 games with Erie in 2010-11 – Varone reached a crossroads.

The Sabres wanted to sign him to an AHL deal. But Varone also had the university option.

His father convinced him to give professional hockey a chance.

“My husband said to him, ‘You know what? This is the opportunity of a lifetime. You got to try it,’” Helena Varone said.

Varone led the Americans in scoring in 2011-12 and slumped a bit last season before catching Buffalo’s eye this year.

“I didn’t have my head in the right place, just thinking about too much,” Varone said. “This year, it’s kind of a clean slate. I got to give a lot of credit to my coaches down there. They gave me a lot of opportunity to succeed.”

Sabres forward Matt Ellis, Rochester’s captain most of the season, said, “Phil came in with a great attitude.”

“He became a leader on or team in Rochester,” he said. “He was someone I considered part of my leadership circle in terms of taking control of that team. His play really picked up. He came in, he became a go-to guy for us. …

“He laid the foundation. He’s just added a couple more bricks to that foundation. That’s part of the reason he’s here today.”

Some other Amerks could experience a day similar to Varone’s later this season.

Nolan said when he and president of hockey operations Pat LaFontaine watched the Amerks in person recently, they told the players the affiliate is not just a farm team. Nolan, an AHL veteran, called the Amerks “our bloodline.”

“There’s a couple other guys that we’re monitoring, we’re looking and probably you might see before the end of the year,” Nolan said.