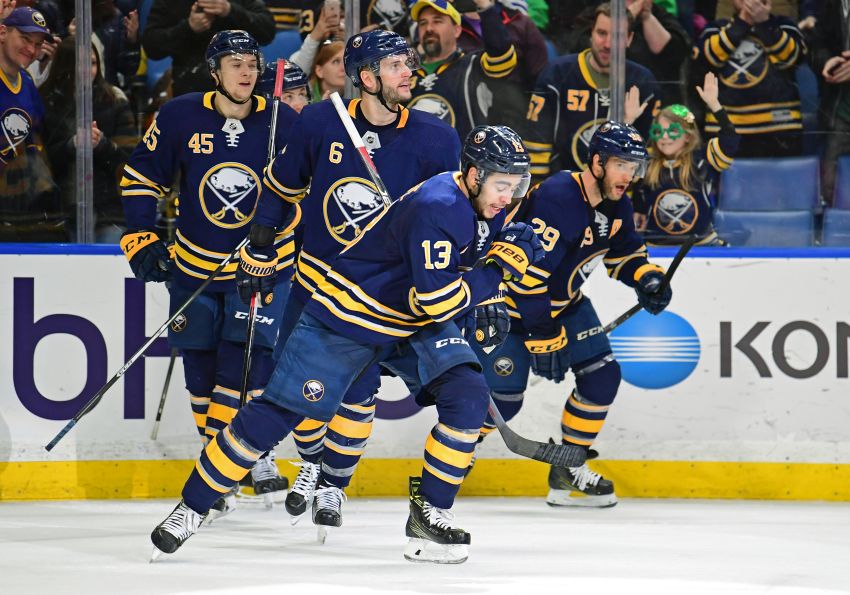 BUFFALO – On a Sabres team filled with, well, not exactly the fastest players, winger Nick Baptiste’s speed stands out.

Slick skating has helped the 6-foot-1, 205-pound Baptiste finally earn regular NHL action three years into his pro career. But the former third-round pick has played 12 straight games because he has evolved and started figuring what can make him successful.

“He’s a big guy and he needs to get to the net,” Sabres coach Phil Housley said after Baptiste keyed Saturday afternoon’s 5-3 come-from-behind win over the Chicago Blackhawks in center Jack Eichel’s return from an ankle injury.

In a span of 15:47, Baptiste scored twice – the tying and winning goals – by tipping shots past goalie J-F Berube from, you guessed it, in front of the net.

“That’s been a focus of our team that last little while, is just getting shots to the net, getting bodies to the net and scoring some ugly ones,” Baptiste said. “We got a couple tonight. That’s what it takes to score goals in this league and win.”

For Housley, Baptiste, 22, must keep getting to the net – the so-called dirty area – to score.

“That’s where he’s going to get rewarded like you saw (today),” Housley said. “We need more of that. He’s continued in a good direction with his development.”

“Just jacked up,” Baptiste said of his celebration. “It’s a goal in the last two minutes of the game, a potential winner. It’s pretty exciting stuff for me.”

The goals, the sixth and seventh of his 36-game career, ended a 12-game drought and doubled his production this season. They were extra special for another reason.

“Mom and brother in town, too, so it’s the first time they’ve seen me score live in the NHL,” said Baptiste, who showcased his speed beside center Evan Rodrigues and Justin Bailey, two other fast youngsters. “It’s been a good weekend for me.”

It was a good weekend for the entire team. Eichel, their leading scorer, recorded an assist in his first appearance since suffering a high right ankle sprain Feb. 10.

For one of the few times this trying season, the Sabres responded well to adversity. After captain Jonathan Toews put the Blackhawks up 3-2 just 20 seconds into the third period, the Sabres battled back before the capacity crowd of 19,070 inside KeyBank Center.

“We never backed down,” Housley said. “I thought the guys responded in the right way.”

Baptiste scored his first goal at 2:17, tipping in defenseman Nathan Beaulieu’s shot. He later got a piece of defenseman Marco Scandella’s shot.

It’s no coincidence the Sabres hit the five-goal mark for only the sixth time this season with Eichel back from his 15-game absence.

During a third-period power-play, Eichel tweaked his injury, something he learned would happen when returned from the same injury last season.

“It feels good now,” Eichel said. “But yeah, you can tweak it here and there and it stings for a minute, but it comes back around.”

Eichel displayed his speed late, zooming to the net and drawing a hooking penalty.

Following Friday’s practice, his third of the week, Eichel said he decided to play.

“This was kind of the next test for me,” he said. “It’s not easy … to take that much time off, come back and feel like yourself. I thought before I got hurt I was playing some of my best hockey, and obviously you miss five weeks, you come back and you’re not as sharp as you want to be, your game’s not where you want it to be exactly.

“But you can’t be too picky. Obviously, (I had) a little bit of rust out there and a couple things I want to clean up.”

“After being out that long and getting a pretty tough assignment against their second line, I think it was a good test for him,” he said. “He responded the right way. I thought he was playing with speed at times. For being out, he had a shot mentality.”