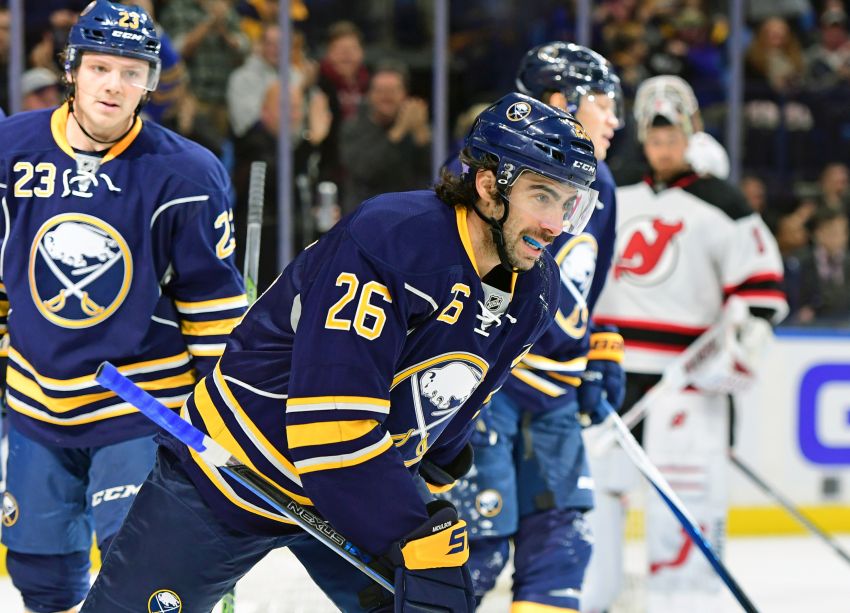 BUFFALO – In Phil Housley’s first weeks as Sabres coach, he has mostly spoken glowingly of his players, accompanying any mild criticism with praise.

However, behind closed doors, Housley, a Hall of Fame defenseman, can be blunt.

“He’s shown a lot respect in terms of he gives it to you honest, whether you want to hear it or not,” Sabres winger Matt Moulson said prior to Monday’s wretched 6-2 loss to the New Jersey Devils. “I don’t think that necessarily means you have to agree with everything, but I think there’s a huge respect factor there.

“I think in this world you get what you give, and he gives a lot of respect and he also gets it as well.”

While Nolan contributed to a solid night for the fourth line, Housley also thought Moulson deserved to play. Nolan, a waiver claim from Los Angeles, recently missed six days of action when the Kings returned from a preseason trip to China and waived him.

“That line was good for us, but I think Matt deserves a chance to get in the lineup,” Housley said. “Jordan needs a little bit more work. He’s been off the ice quite a long time and you can see it out there.”

So Moulson, 33, replaced Nolan for Saturday’s 6-3 road loss to the New York Islanders and Monday’s tilt inside KeyBank Center.

Moulson, whose lack of speed has become an issue, played up and down the lineup last season, often skating on a top scoring line or the fourth trio while earning time on the power play. He scored four times in the first five games a year ago. Eleven of his 14 goals came on the man advantage in 2016-17.

For the last two games, Moulson, who’s at his best around the net, has mostly played at right wing beside center Jacob Josefson and Johan Larsson. Housley also moved Moulson up to a scoring line later Monday.

“All the lines are capable of playing a fast game, both ends of the ice,” said Moulson, who was on the ice for three New Jersey goals. “We have a lot of depth, so just being ready to do anything, just making sure I’m responsible out there wherever (I’m) in the lineup.”

Josefson, a free agent signing, only averages about 10 points a season. Still, the Swede, a former first-round pick, possesses some notable skill.

“He’s a great guy, very easy to communicate (with) on and off the ice, real responsible at both ends,” Moulson said. “I said when I met him he reminded me of (Detroit All-Star) Frans Nielsen, the type of person and player where he’s just responsible, does what he’s asked, no complaints, just kind of goes out there and does his job. He has a lot of skill.”

Notes: Former defenseman Mike Boland, who played 22 games with the Sabres in 1977-78, has passed away, according to multiple reports. He was 62. Boland still lived in the area and was active in the Sabres Alumni Association. … Sabres defense prospect Austin Osmanski has been traded from the Ontario Hockey League’s Mississauga Steelheads to the Peterborough Petes. The Sabres drafted the East Aurora native in the seventh round, 189th overall, in 2016. … The Amerks have sent winger Vaclav Karabacek, a second-round pick, 49th overall, in 2014, to the ECHL Cincinnati Cyclones. … The Sabres had Tuesday off.