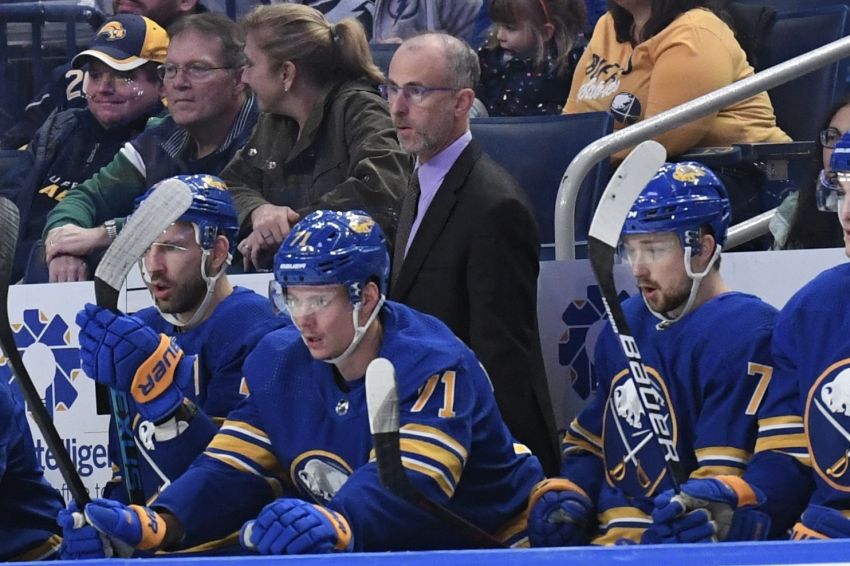 BUFFALO – Having both piloted the same junior franchise to a championship, Sabres coach Don Granato and Jon Cooper, his counterpart with the Tampa Bay Lightning, are part of a small fraternity.

In 1995-96, Granato led the Green Bay Gamblers to the Clark Cup, the United States Hockey League’s championship. He stayed in Green Bay another year – he wanted to try to win back-to-back Cups – before parlaying his time there into a pro gig with the Columbus Chill in the ECHL.

Cooper won his Clark Cup in 2009-10, the third of six titles, including the last two Stanley Cups, on his impressive resume. Three years later, after a successful run with the Lightning’s AHL affiliates, Cooper earned a promotion to Tampa Bay.

One of Cooper’s assistant coaches, Derek Lalonde, also led the Gamblers to a championship in 2011-12.

“Some rich tradition in the coaches coming out of Green Bay,” Cooper said prior to Monday’s 5-1 loss to the Sabres inside KeyBank Center. “So that’s how we’ve all kind of had this common bond with each other.”

Over the years, Cooper has enjoyed catching up with Granato.

“You have a chance to have a cold one with somebody, Donny Granato’s a good guy to have one with,” he said.

Granato and Cooper, of course, share a mutual respect for each other.

“He’s earned his stripes,” Cooper said of Granato becoming a permanent NHL head coach for the first time this season. “You can see the way the team’s playing, they’re playing hard for him. I’m super happy for him.”

Cooper rattled off some of the Sabres’ significant offseason losses – about five of their best players from last season are gone – and attributed their 3-1-1 start, in part, to Granato.

“It’s a completely different team but you can tell it’s a difficult team to play against, that teams are having trouble with them,” he said. “I credit that a lot to Donny.”

Despite losing Friday and Saturday, Granato dressed the same 18 skaters for the third consecutive game.

Five games into the season, Granato hasn’t pulled a healthy player from the lineup. Meanwhile, the forward lines and defense pairs have mostly remained intact.

Not surprisingly, the players like the stability Granato has been giving them.

“I’m sure a lot will change and could change in the future but it’s nice,” Sabres defenseman Jacob Bryon said. “We’ve got good chemistry as you see in practice. The first five games have gone well so far, I’d like to say, but, yeah, it is nice going into games and you have the same lineup night after night.”

Granato said in Saturday’s 2-1 overtime loss to the New Jersey Devils, the Sabres weren’t trailing, so he kept his trios intact.

“If we were in search of a goal, maybe we would’ve thought about changing lines,” he said. “We almost needed to hold things together and more stability defensively the other night. And that, you don’t want to break up the lines. We needed four lines the other day.

“I felt we looked a little tired and we were playing a little tired. Some of the decisions we made later in the game were fatigue decisions, they weren’t the players’ lack of ability. They were just fatigue-induced. And so that was why there was no line mixing the other day.”

Monday was the 30th anniversary of the blockbuster trade between the Sabres and New York Islanders that brought future Hall of Famer Pat LaFontaine to Buffalo.