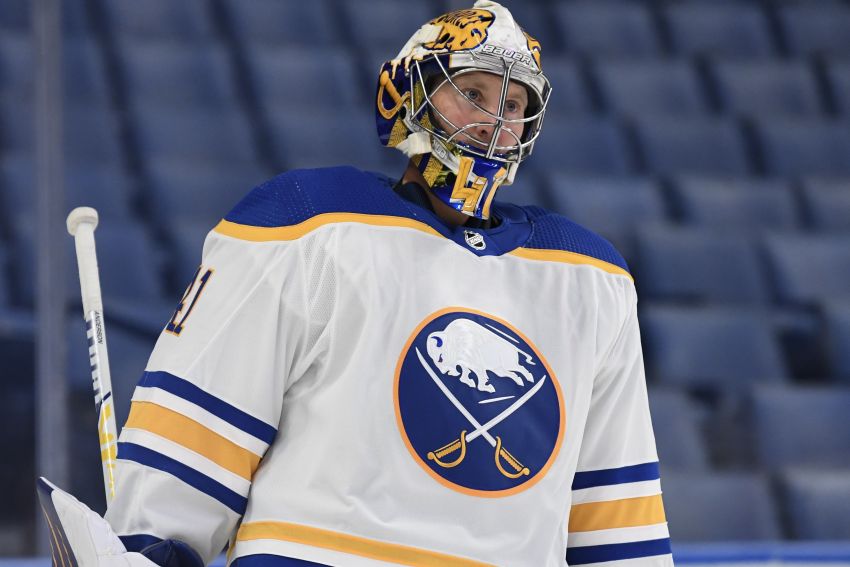 BUFFALO – A lot has changed since the Sabres last faced the Tampa Bay Lightning on Dec. 31, 2019.

There was a global pandemic. The Sabres changed regimes, plummeted to the bottom of the NHL again and hired a new coach. The Lightning, meanwhile, won two Stanley Cups.

The Lightning, the Sabres’ Atlantic Division rival, have become the NHL’s bellwether franchise.

If the Sabres want to go anywhere, they have to knock off the Lightning.

Of course, on some level, the Sabres want to emulate the Lightning. But coach Don Granato said teams look at every organization. He doesn’t want the Sabres to lose what they have, either.

So he wants the Sabres, who have enjoyed a strong 3-1-1 start, to be themselves.

“So you don’t want to just play copycat. We got to look at what’s our locker room and there’s a lot to be proud of there, especially in the potential. I mean, there’s a lot of potential there. So stay excited about that is what our approach is.”

Sabres don’t exactly possess a lot of established offensive firepower. But other than the second half of Saturday’s 2-1 overtime loss than the New Jersey Devils, they’ve consistently created off. They’ve just been struggling to finish.

Granato said the Sabres have been holding “it a little tighter” and “overthinking it a little bit.”

“We’re one instant tense after we create the scoring chance,” he said. “There’s not that relaxation. There’s relaxation all the way up to the process of that, which we’re seeing. And then we get there and we’re that one little bit tense. And you bring too much attention to it, it can complicate things, right? Because there’s a psychology behind it. So we just got to not necessarily ignore it, but you got to approach it with confidence.

“We’re going to get there again, just bury it and move on, let it go. If you miss one of those the inclination is you tense and you squeeze, and I’ve seen that. Guys come back to the bench, they’re carrying frustration they just need to let go of. Get ready for the next one.”

In lineup news, Granato will turn to goalie Craig Anderson tonight, his fourth nod this season. The Lightning, meanwhile, will start goalie Brian Elliott, who has dominated the Sabres over his 14-year career.

Elliott has compiled some staggering numbers – a 17-3-2 record with a 1.88 goals-against average, a .937 save percentage and four shutouts – in 23 career games against the Sabres.

Lightning coach Jon Cooper said Elliott’s career numbers against the Sabres did not play a factor in the veteran playing tonight.

The Sabres will use the same 18 skaters they dressed Friday and Saturday.