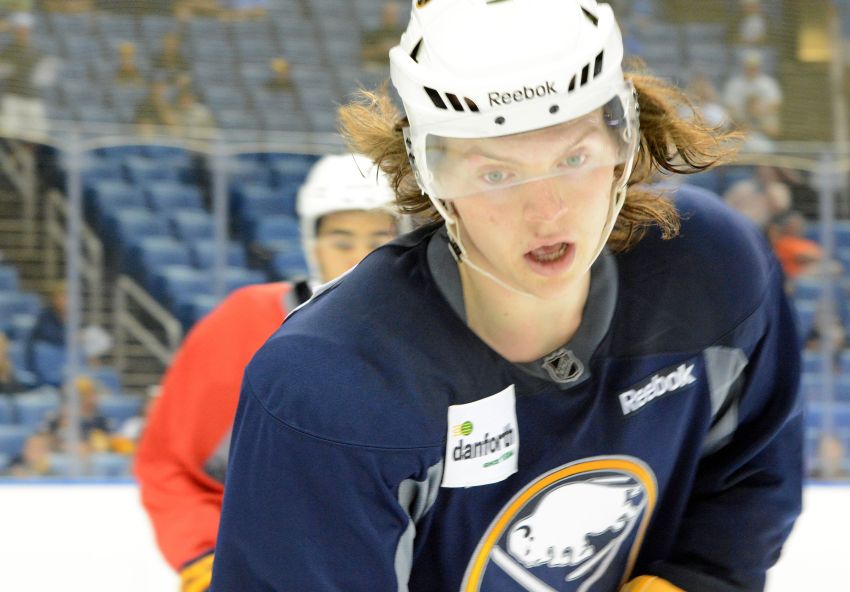 “Someone asked him how many goals he scored this year,” said winger Evan Rodrigues, Chapman’s teammate in the eight-team tournament. “He said none.”

“It was really exciting,” a happy Chapman said in a hallway before leaving the First Niagara Center. “It’s kind of shocking, actually. I just kind of went in, did a little dipsy doodle, which was unusual for me, put a bar down shot in. I was happy and the guys were obviously giving me a hard time about it.”

In a camp loaded with strong prospects, Chapman, who’s out of junior eligibility, managed to stand out.

“It’s been a blast,” Chapman said. “I’ve cherished every moment since I’ve been in here. I’m happy it’s kind of done because it was tiring. In another way, I’m sad because it was an experience to be here. I appreciate all the guys. Everyone in the organization was just tremendous with you. It really shows you what it takes to be a pro here.”

Chapman said he’s “not sure what the future holds for me right now.”

“I’m just kind of floating,” he said. “It’s exciting, but in another way it’s kind of nerve-racking. I’m not too worried.”

Meanwhile, Eichel scored five goals during the half-ice games. One goal even went through the net. The 18-year-old center clearly had more jump than Friday, when he looked worn out by all his recent activity.

Eichel wanted to win the tournament – “I was mad when we lost,” he said – an attitude Sabres general manager Tim Murray likes.

“That’s a competitive thing that you can take out of something like this,” Murray said. “That’s what we want.”

He learned a lot about the Sabres during his first stint with the team.

“They expect a lot out of you here,” Eichel said. “They’re also going to give you a lot. Nothing’s given, but you earn everything, and I think that’s a really good mentality. That’s a recipe for success.”

Murray on the rabid fan support throughout development camp: “It’s an unbelievable hockey market. I call it the eighth Canadian market, and I think we’ve surpassed a lot of Canadian markets when it comes to this type of thing.”

He added: “I think it’s important that the players see as they’re coming in here what type of market we’re in. We want the players to want to be Buffalo Sabres.”

About 1,500 fans watched the three-on-three tournament. Murray said Friday’s scrimmage was originally supposed to be played Thursday, but it was moved so more fans could attend.