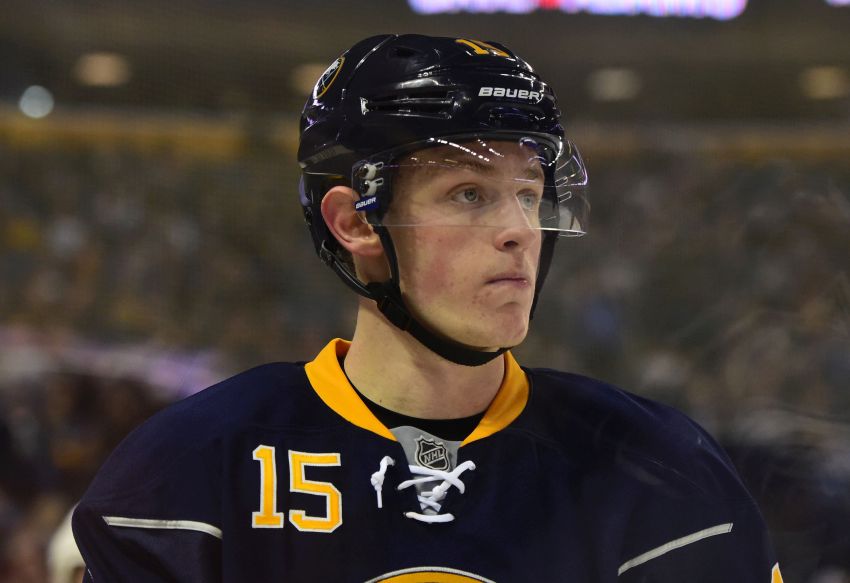 BUFFALO – The loud thud center Jack Eichel made crashing to the ice broke through the din that accompanied the Sabres’ final preseason practice.

It was approaching 11:30 a.m. Wednesday, the eve of the season opener, and coach Dan Bylsma wanted another 10 minutes, maybe less, from his players before they showered and headed to the team’s annual kickoff luncheon.

Then, suddenly, Eichel’s left leg buckled after he lifted Zemgus Girgensons’ stick during a power play drill, and he fell awkwardly, suffering a high ankle sprain, one of hockey’s dreaded injuries.

Eichel writhed in pain before receiving attention. He was eventually helped off the ice without putting any pressure on his left leg.

Talk about a nightmare. Under the best-case scenario, Eichel, 19, will probably be out until mid- or late November or early December. High ankle sprains are notoriously tough to overcome.

Eichel’s so popular and talented his presence has already recharged the franchise and its rabid fan base. Optimism was brimming he would help lead the upstart Sabres to their first playoff appearance since 2010-11.

Tonight’s season opener against the Montreal Canadiens won’t be the same without the 2015 second overall pick.

The Sabres offered no timetable for Eichel’s return in announcing the injury Wednesday afternoon. TSN’s Bob McKenzie, however, reported the team anticipates he will miss four to six weeks or longer.

Recovering from a high ankle sprain can often be long and arduous.

Sabres goalie Robin Lehner suffered one on opening night a year ago, an injury that sidelined him three months and dogged him until he had season-ending surgery on his right ankle in late March.

Eichel, of course, is a potential superstar. He scored 24 goals and 56 points in 81 games during a rookie season in which he consistently improved and wowed fans with his dynamic talents.

The 6-foot-2, 196-pound Eichel showcased strong durability as a rookie. Despite playing more than 19 minutes a game and constantly possessing the puck, Eichel rarely endured a notable hit thanks to his speed and smarts. He missed only one game because of the flu.

Two weeks ago, when Eichel returned from the World Cup of Hockey, he spoke confidently and passionately, saying the Sabres possessed the talent to make the playoffs.

“Anything less than that,” he said, “is an underachievement this year for us.”

Those playoff hopes might already be in serious jeopardy.