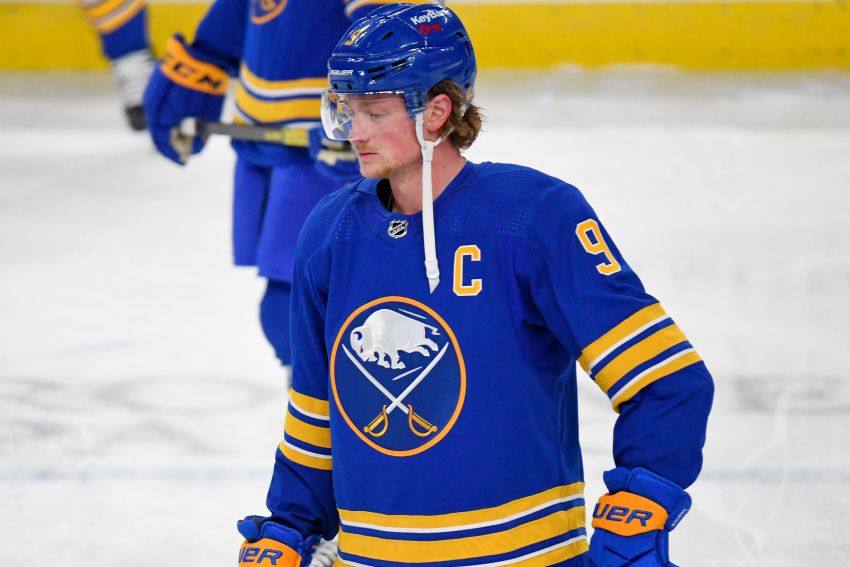 Jack Eichel is questionable for this weekend. ©2021, Micheline Veluvolu

Both players have lower-body injuries and did not practice today inside KeyBank Center.

Ullmark, the Sabres’ No. 1 goalie, left Thursday’s 4-3 overtime loss to the New Jersey Devils after the first period. Kruger said Ullmark was having X-rays done this afternoon.

“We’re not expecting him to be available over the weekend, but we are hoping it becomes a day-to-day after the weekend,” Krueger said on a Zoom call.

Eichel suffered a lower-body injury during Thursday’s pregame warm-up and was a late scratch.

In other lineup news, defenseman Rasmus Ristolainen, who tested positive for COVID-19 earlier this month, could be close to playing. The Finn spent today’s practice beside rookie Jacob Bryson. Nine defensemen participated in the session.

The virus weakened the 6-foot-4, 221-pound Ristolainen so much he had trouble walking up the stairs in his home, he told a Finnish newspaper. He has missed the last seven games.

Krueger had been hesitant to put a timeline on Ristolainen’s return.

“We had no idea on the pathway,” he said. “What we are happy about is his amazing physical foundation that he had coming into his battle with COVID is helping to expedite his return. You can just see the athlete. The work ethic, all of that pays off for athletes when they come off of this.

“So we’re really pleased with what he’s shown yesterday and today and hopefully we’ll see that again tomorrow morning so we can put him back in the lineup. It’s not a given yet, but it’s a high possibility.”

Meanwhile, winger Tobias Rieder has recovered from the upper-body injury that sidelined him the last two games. Krueger said Rieder is “definitely available.”

Casey Mittelstadt, a fourth-line left winger throughout this week, moved over to center Jeff Skinner and Riley Sheahan because Lazar moved up.