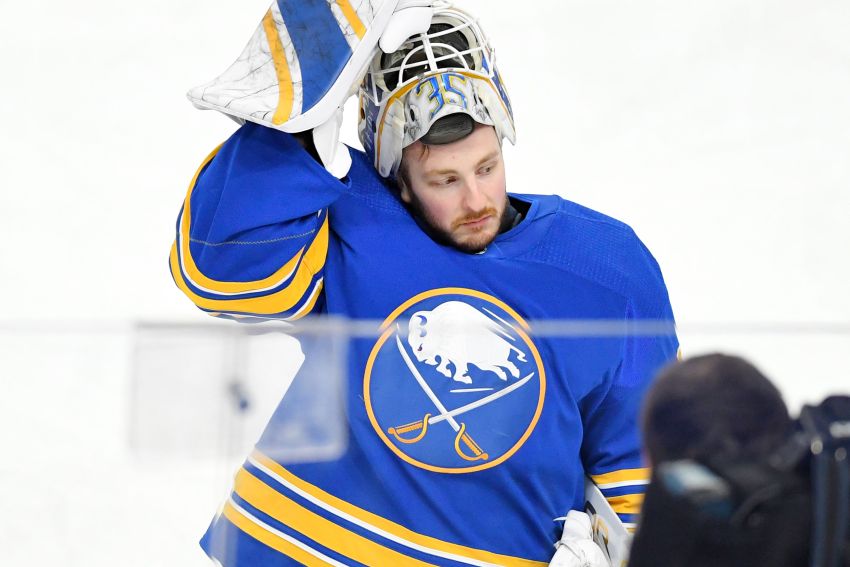 Still, Sheahan, a fourth-line winger, never expected he would be thrust into Eichel’s spot as the No. 1 center following the pregame warm-up.

“I … saw the lineup had changed and my name was up there with (Victor Olofsson) and (Sam Reinhart),” Sheahan, who opened the scoring, said on a Zoom call following the Sabres’ 4-3 overtime loss inside KeyBank Center.

The Sabres gave Eichel, who appeared to hurt his ankle Tuesday in New Jersey, Thursday morning off. Coach Ralph Krueger seemed confident he would play.

But during the warm-up, Krueger said a “lower-body complication showed up.” The Sabres had to scratch Eichel, their leading scorer, just minutes before the game.

“It was not related to him not skating this morning,” Krueger said. “It definitely caught us all by surprise. The first diagnosis on it is day to day. The feeling he had, that there was a risk of putting him into the game situation.

The Sabres are also assessing Linus Ullmark, their starting goalie. Ullmark suffered a lower-body injury and left the game after the first period. Carter Hutton replaced him.

“We have really no idea yet of the severity of the injury,” Krueger said of Ullmark. “I’ll be honest with you, we need to take a deeper dive at it first thing in the morning and we’ll give you an update then after the skate.

The Sabres are also missing three of their top defensemen: Will Borgen, Jake McCabe and Rasmus Ristolainen.

“We could have done better in overtime,” Krueger said. “But getting to overtime with all the chaos that was going on in and during the game, I thought the guys stuck with it. … But being honest with you it stings the same when it’s done. We need to assess our situation pretty quickly and move toward the weekend.”

Pavel Zacha scored the winner 1:17 into overtime, beating Hutton from the right circle.

Reinhart’s power-play scored 15:30 into the third tied it after goals from Miles Wood and Nico Hischier earlier in the period put New Jersey up.

“I don’t think my stick touched his lip or anything like that,” said Hall, who was stopped on a first-period breakaway by goalie Mackenzie Blackwood.

Hall made amends when he fed Reinhart in front to tie the game. Reinhart has scored four goals and seven points in the last five games.

Winger Casey Mittelstadt scored the Sabres’ other goal, his first since Nov. 29, 2019. Shortly after that goal, the Sabres demoted him to the minors for the rest of the season.

But Mittelstadt, 22, has enjoyed a strong comeback campaign, working his way up from the taxi squad into regular duty. He looked impressive in two spot appearances last month. Krueger inserted him again Monday and has played him the last three games.

When Mittelstadt converted center Eric Staal’s pass in front on the power play, his smile told the story.

At this point, it would be difficult to yank Mittelstadt out of the lineup.