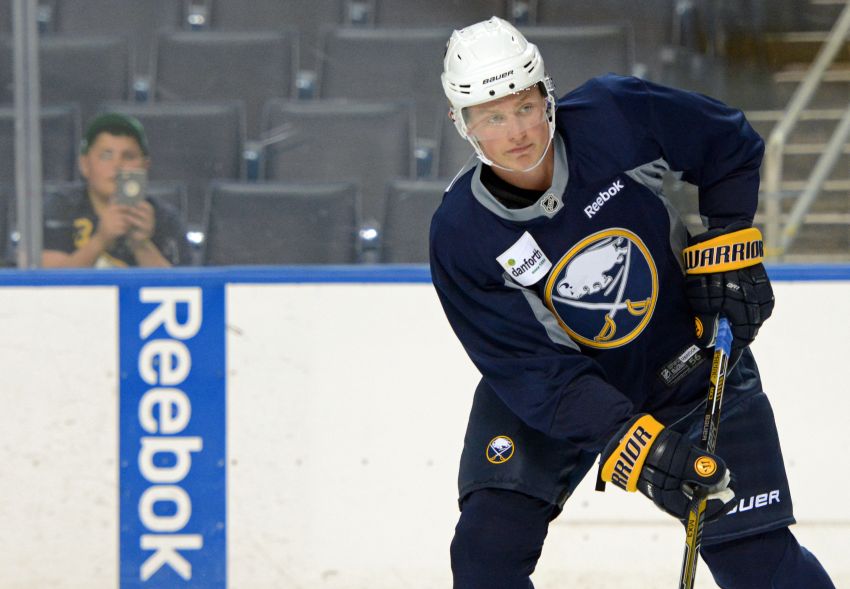 BUFFALO – At around 1:10 p.m., most of the 1,000 or so Sabres fans inside the First Niagara Center had their eyes focused on the tunnel next to the visiting bench waiting for a glimpse of slick center Jack Eichel at development camp.

When Eichel touched the ice for the first time in Sabres gear, the crowd cheered Buffalo’s newest phenom as cameras went off.

Is Eichel, the second overall pick June 26, surprised the so many fans showed up to a practice on a weekday in the summer?

Minutes later, Eichel skated down and wired his first shot by the goalie.

Check back later for more from Eichel, who’s wearing No. 41 in camp. It doesn’t appear to be his official number yet.

In other news, the Sabres have hired Dan Lambert as one of coach Dan Bylsma’s assistants. The two played together in the 1990s. The 45-year-old Lambert coached the Western Hockey League’s Kelowna Rockets last season. He also played 29 NHL games with the Quebec Nordiques.

One thought on “Jack Eichel on cheers from Sabres fans: ‘A special moment’”