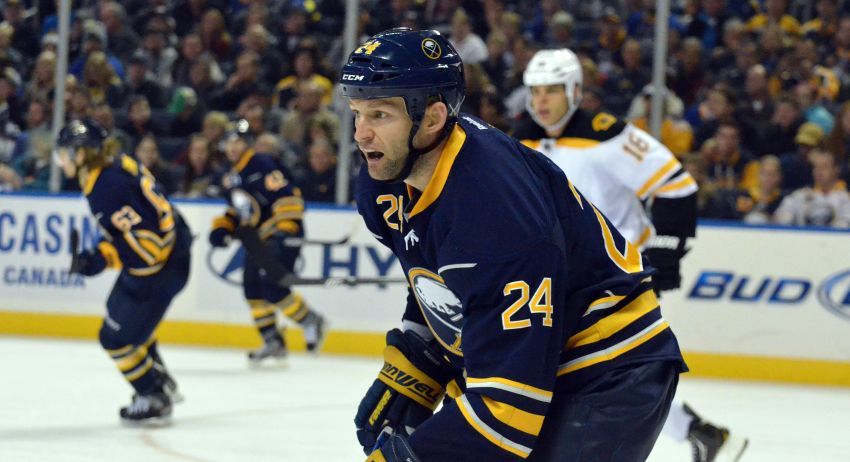 Meanwhile, the Sabres waived forward Matt Ellis to make room for defenseman Robyn Regehr on the 23-man roster prior to their 3-1 loss to the Boston Bruins.

Teams have until noon today to claim the 31-year-old Ellis, a high-energy fourth-liner.

The Russian’s been receiving minimal ice time recently, skating only 10:34 and 7:13 in his last two outings. Ruff, however, has upped the center’s minutes late in games, awarding him some regular third-period action.

Grigorenko, who took the pregame warm-up Sunday, assisted on Alexander Sulzer’s third-period winner in Saturday’s 3-2 triumph over the Islanders in New York.

“There’s times he’s going to get good ice time, there’s times where if he’s going well he’ll get more ice time,” Ruff said. “Where you look at early in the game (Saturday), the handling of the puck, he made some choices I’d like to improve. I didn’t like the way some of the players above him were playing, so I put him in a situation where he’d get more.

“You play them some, you look at his conditioning, you look at days where maybe you can make him better,” Ruff said. “We basically kind of got to plan for him. If he’s going real good in games, he’ll play even more. If we’re looking for different matchups, he may play a little less.”

The respected Ellis, a veteran of 267 NHL games, could get claimed. He’s cleared in the past, though. Ellis had already sat six times this season.

The Sabres plucked Ellis off waivers from Los Angeles during training camp in 2008. He carved out a regular role over the years, playing 72 times in 2009-10 and 60 last year.

Ellis could end up in Rochester. He was named Portland’s captain when the Sabres sent him to the AHL for most of 2010-11.

The Sabres rewarded Ellis with a two-year contract, including a one-way deal for this season, meaning he would make his full salary in the minors.

Meanwhile, it was believed Myers, an NHL-worst minus-9, might play again Sunday. When Ruff scratched the four-year veteran once last season, he immediately recaptured his old form the next game, scoring twice.

“He hasn’t defended well, obviously,” Ruff said. “He’s made some decisions that have been tough decisions on the ice, some gambles that have turned it to goals against. We’ve tried to help him with those decisions.

“I think he’s caught in between where he wants to create offense, and he’s put himself in a tough position defensively on some of these. So we’re trying to help him through it.”

Myers, a gaffe machine this season, wants to simplify and enjoy the game. He’s been putting too much pressure on himself.

“The game’s always a lot easier if you’re working hard and having fun,” Myers said. “It’s much easier said than done. The way the things have been going it’s not very fun to be performing the way I am. I’m going to have to turn it around.”

He’s hoping watching a couple of games will help him.

“It’s always a good way to look at the game, to see the whole ice, to see different situations unfold and to really study proper ways to play each situation,” Myers said. “It never hurts.”

“I thought he was solid,” Ruff said about Regehr. “He helps our penalty killing. He’s a tough body to play against.”