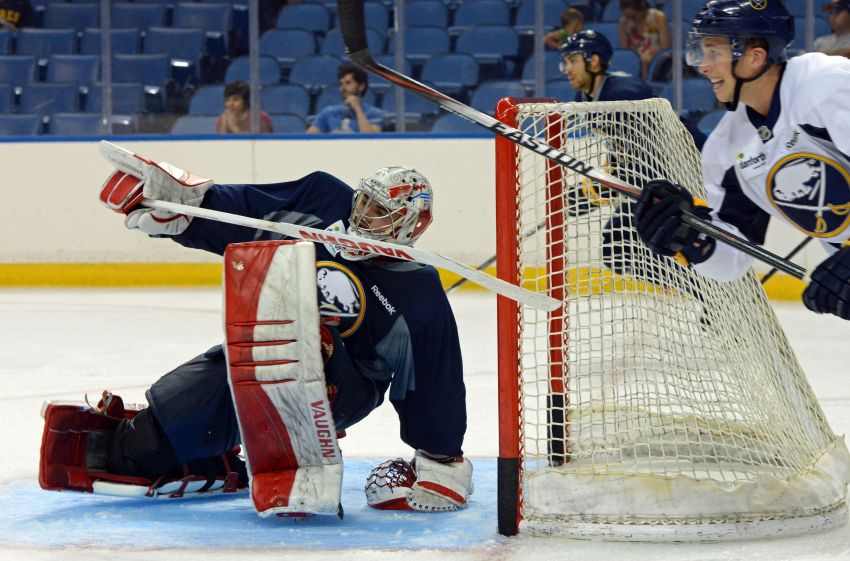 BUFFALO – The plan is for goalie Jason Kasdorf to spend a couple of days rehabbing his groin injury before the rookie starts practicing with the Sabres.

The Sabres, of course, have two healthy netminders in starter Robin Lehner and backup Chad Johnson. But with 12 games left, Sabres coach Dan Bylsma said there’s a “possibility” Kasdorf could play in the NHL this season.

Kasdorf, 23, signed a one-year, entry-level contract Monday, two days after his college season at R.P.I. ended. The Sabres will keep him the rest of the year.

The Winnipeg native watched practice today in workout gear from the bench as players and coaches came over and chatted with him.

“I’m incredibly excited,” Kasdorf said inside the First Niagara Center. “I’m just thrilled the opportunity I have to be here, to be a part of the organization. It’s a dream come true.”

The 6-foot-3, 172-pound Kasdorf played his final NCAA game Friday, finishing the season 12-12-5 with a 2.30 goals-against average and a .931 save percentage. He wasn’t healthy enough to play Saturday.

“I would give it a 10 out of 10 as far as how much I loved it,” he said about his season. “It was an unbelievable experience.”

Bylsma knows Kasdorf a bit from summer development camp and followed his season.

“He was the best goalie here in the game (in July),” Bylsma said. “His calmness, his maturity in the net was very clear when he got to the game and showed in the opportunity he got here in the summertime, and that’s the kind of goalie he is – he’s a calm, confident, quiet goalie.”

Just practicing in the NHL will be a “huge” experience for Kasdorf, Bylsma said.

“The opportunity to get NHL shots, to get him practice, to see the speed of the game and the quality of the shooters is going to be an adjustment for him and a great opportunity for him,” he said.

The Sabres acquired Kasdorf in last year’s blockbuster trade with the Winnipeg Jets that brought winger Evander Kane to Buffalo.

While Kasdorf’s in the NHL, he still has schoolwork and has spoken to his professors.

“I got to kind of stay on top of things when I’m not at the rink, got to do some homework, stuff like that,” he said.

He plans to graduate in May with a business management degree.