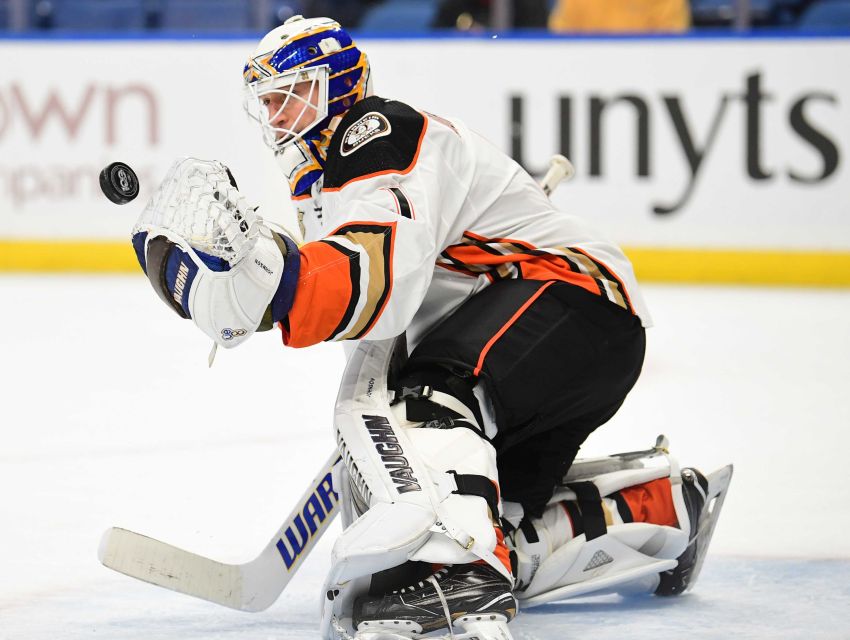 BUFFALO – When former Sabres goalie Chad Johnson entered free agency and began studying teams he could potentially join, he zeroed in on the St. Louis Blues.

Johnson, 32, examined the Blues on paper, talked to people familiar with them and did enough homework to feel comfortable signing a one-year, $1.75 million contract July 1.

“I thought it was going to be a good fit,” Johnson, who endured a rough season with the Sabres in 2017-18, told the Times Herald on Saturday.

The veteran backup lasted 10 games with Blues, who quickly morphed into arguably the NHL’s biggest disappointment this season.

“It was just kind of a different situation again, sort of like the Buffalo situation, just kind of from what you thought it would be, right?” Johnson said prior to the Anaheim Ducks’ 3-0 loss inside KeyBank Center.

On Dec. 11, the Blues waived Johnson. A day later, the Ducks, who needed a goalie with ex-Sabres star Ryan Miller sidelined by a sprained MCL, claimed him.

“Was I surprised? At this point, kind of what I’ve been through so far, nothing really surprises me,” Johnson said of getting waived. “But was I disappointed? Absolutely. I think at the end of the day, I knew there was going to be change in those situations.”

The Blues usually rank among the league’s heavyweights. While they missed the playoffs last season, they still earned 94 points. They retooled during the summer, adding center Ryan O’Reilly from the Sabres in a blockbuster trade.

“It was just that inconsistency, I think,” Johnson said of the Blues. “One night you could go and beat Colorado or a top-ranked team and play a good hockey game. But then the next night you come out and you’re flat, you get down a goal and everyone just kind of shuts it down.

The Blues already fired their coach Mike Yeo, replacing him with Craig Berube. Johnson said after the coach is jettisoned, the goalie often goes next.

“At the end of the day, the explanation was they needed to wake some people up,” Johnson said, who was replaced as Jake Allen’s backup by Jordan Binnington, an AHL veteran with 13 minutes of NHL experience.

The last two years have been rough on Johnson, who rejoined the Sabres in 2017-18 following a season with his hometown Calgary Flames.

A sense of unfinished business, among others things, lured Johnson back to Buffalo a year ago. He enjoyed a terrific 2015-16 season, morphing into the team’s backbone. His teammates even voted him the Sabres’ unsung hero.

When the Sabres cleaned out their lockers in April, Johnson basically said he regretted re-signing here, saying he “wouldn’t have put my career in a situation like that after having a lot of success and doing well.”

“It was frustrating,” Johnson said Saturday. “Looking back at it, you’re sour about the situation. It wasn’t a good year, it wasn’t a fun year. It was the most disappointing season I was a part of. I think everybody feels that same way looking back on last year.”

“I was just ecstatic,” Johnson said of getting claimed by the Ducks. “It’s just been a tough two years, tough situations to be in. It’s been hard, especially when you feel like your career is moving forward and upwards.”