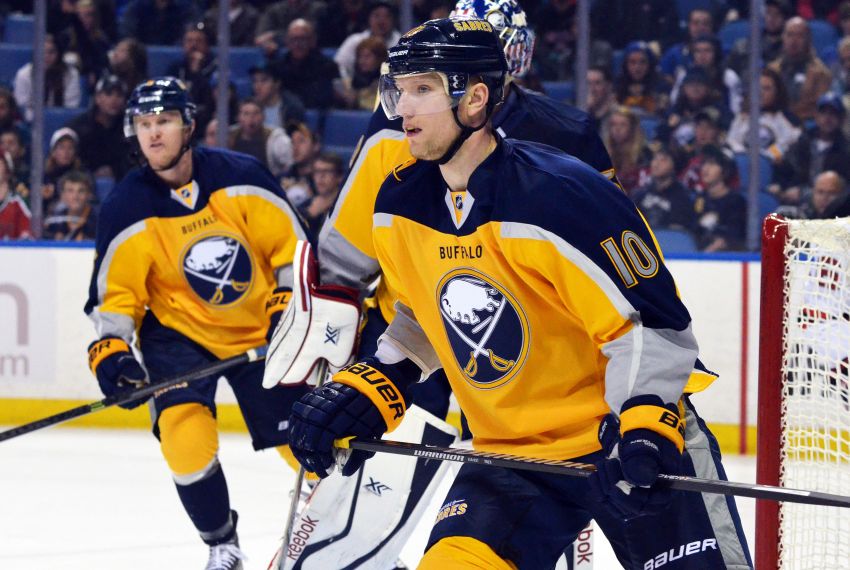 Christian Ehrhoff was a minus-27 this season. ©2014, Dan Hickling, Olean Times Herald

BUFFALO – Offensively, Christian Ehrhoff enjoyed his best season with the Sabres in 2013-14, compiling six goals and 33 points in 79 games. But those numbers don’t tell the entire story.

Like most of his teammates, the defenseman struggled much of the miserable campaign, compiling a minus-27 rating.

By March, Ehrhoff’s name was popping up in trade rumors. With a salary cap-friendly $4 million hit and $22 million of his massive 10-year, $40 million contract already paid, he could garner some interest this summer.

The 31-year-old thought he was joining a team built to win the Stanley Cup in 2011. Now, he’s the second-oldest player under contract on the rebuilding club.

Does he want to stay?

“I signed a long-term commitment with the team,” Ehrhoff said last week as the Sabres cleaned out their lockers inside the First Niagara Center. “As long as they want me to be here, I’m going to do my best for the team.”

Clearly, the Sabres use Ehrhoff too much. He averaged 23:55 of ice time this season, two minutes more than anyone else. He’s probably better suited to be a No. 2 defender.

Ehrhoff thrived earlier in his career playing a little less.

General manager Tim Murray said Ehrhoff will improve if the Sabres add more talent around him.

“If everybody had more support, they’d be better hockey players,” Murray said. “I’ve been through the down time with Anaheim and Ottawa where we’ve had a tough year and we’ve traded some guys and we thought, ‘Oh.’ Your first reaction is your kids aren’t coming as quick as you had hoped or you thought the year before. Then all of a sudden you surround them with better people and they’re back to where they were two years before.

“It’s support. You support your players with better players.”