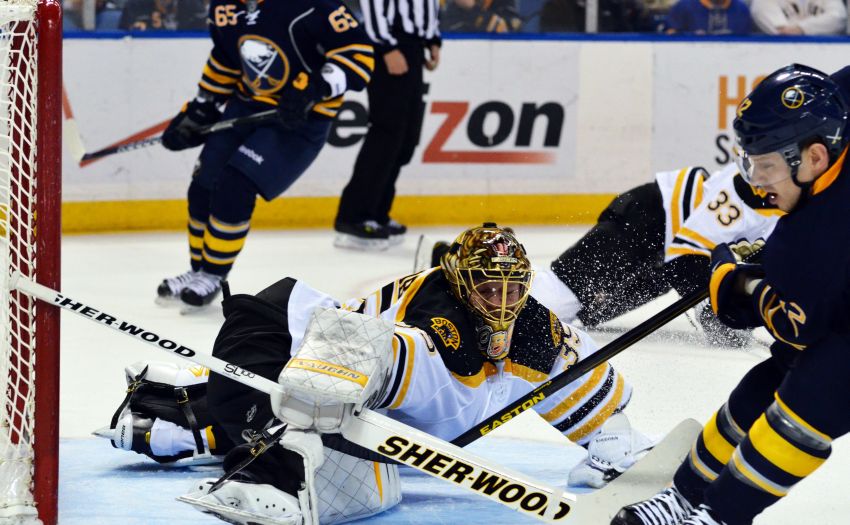 BUFFALO – In coach Ron Rolston’s mind, the Sabres’ 2-0 loss to the Boston Bruins on Sunday “was probably one of our best games” since he took over the struggling club on an interim basis 40 days ago.

Never mind the Sabres’ fourth straight loss (0-2-2) dropped them to 13th place in the Eastern Conference, three points behind the eighth-place New York Rangers. Forget that Anton Khudobin, a relatively unknown backup goalie, only made a few notable saves among his 26 inside the First Niagara Center.

“We played a complete game, had a couple mistakes there at the end,” said Rolston, whose team was booed off the ice by what remained of the crowd of 19,027 fans. “But we didn’t take a penalty the whole game. I thought that was one of our best team games since I’ve been here, hands down.”

Nonetheless, the Sabres hung tough against the stingy Bruins until 12:54 into the third period, when David Krejci slipped to the top of the crease and beat Ryan Miller, whose 491st appearance in net tied the legendary Dominik Hasek’s all-time franchise mark.

Nathan Horton’s goal at the crease sealed it at 15:44.

“Two mistakes there we got to have coverage on,” Rolston said. “I thought other than that our D-zone was real good tonight. I thought we got out well. I thought we had a forecheck. The first period, I think we had the chances at 6-2 us. We had some unbelievable opportunities down there, didn’t finish on.

“So I thought we played well.”

Considering the Sabres often showcase a feeble offense, Rolston made one bold move, demoting No.1 center Cody Hodgson, whose 12 goals and 28 points rank second on the team, to the fourth line.

Instead of pivoting Jason Pominville and Steve Ott, the 23-year-old played between Patrick Kaleta and tough guy John Scott, who are both pointless this season. Scott has one NHL goal in 170 games.

Why did Rolston make the move?

“I wanted to put Jochen with Pommer and Steve Ott just for more stability on that line,” he explained.

When pressed a bit, Rolston said, “He’s got to be better on the defensive side of things right now, period.”

Hodgson’s even rating and scoring prowess has hidden some defensive deficiencies all season. The youngster has performed poorly around his own net. Twenty-four even-strength points also mask his defensive woes.

“You have to ask coach,” he replied.

Did Rolston give him any indication?

“I’m just trying to play, guys,” Hodgson said. “I don’t worry about where I play or how much I play.”

Hodgson said he enjoyed playing with his new linemates, calling it a “different dynamic” instead of a change.

“I like playing with John,” Hodgson said. “He’s a big, physical guy who goes to the net. Patty creates a lot of room out there. That was a pretty good combination. I thought we did some pretty good things out there.”

Hodgson still played on the power play, which frittered away four chances in the first two periods.

Miller, who made 29 saves, kept his teammates in the contest.

So was Boston, which stuck to its game plan.

“That’s what good teams do, they’re patient and they’re confident,” Rolston said. “They went into the third period with that in mind. We still have to get there.”

Miller, meanwhile, received a nice ovation when his milestone was announced.

“I guess I didn’t realize it was a milestone until they said it in the first period,” Miller said. “It does mean an awful lot. To play nearly 500 games as a goaltender, I never thought I’d get the opportunity. I was just happy to make an NHL team. I’m just trying to enjoy the ride as best I can. I’ve played with a lot of good players. It’s been a lot of fun, excited to kind of creep up to that 500 mark. I’m just trying to keep having fun with it. It’s been a dream come true.

“The Sabres have really given me pretty much every good hockey moment I’ve had in the last 11 years, or else they’ve been a platform for me to get those opportunities like the chance to go to the Olympics or play in world championships. So it’s been nice.”

With rumors swirling as Wednesday’s trade deadline approaches, some may be wondering if Miller will break Hasek’s record.

Sabres blow another third-period lead, fall to Capitals in shootout