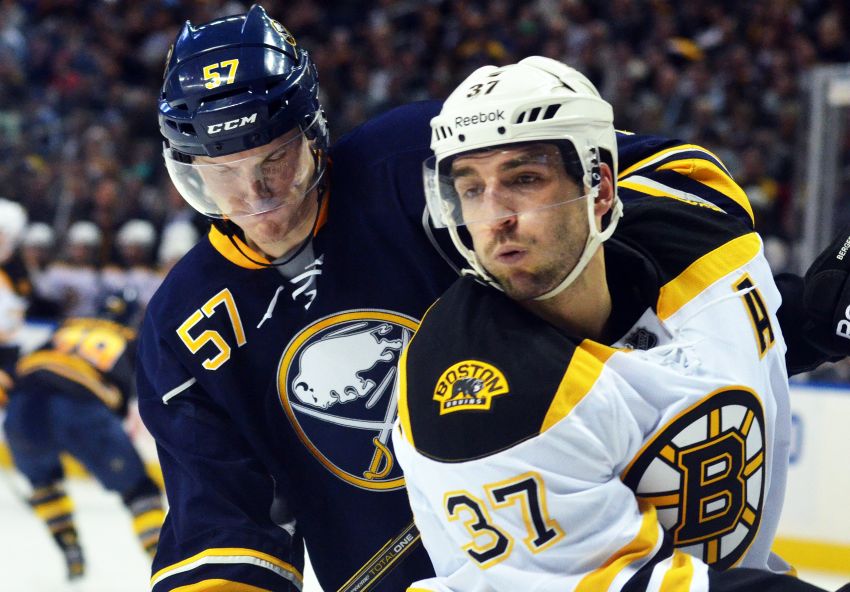 BUFFALO – Almost a day later, Jordan Leopold’s trade to the St. Louis Blues hadn’t “really processed yet,” Tyler Myers said Sunday morning. As soon as he found out about the deal, a surprised Myers sent Leopold, a mentor and occasional defense partner, a text message wishing him all the best.

“He seemed excited and ready for a new start,” Myers said prior to the Sabres’ 2-0 loss to the Boston Bruins inside the First Niagara Center.

For some Sabres defensemen, Leopold’s departure gave them a new start Saturday.

Myers, fresh off an in-game benching Thursday, skated a season-high 28:13 in a 4-3 shootout loss to Washington. Meanwhile, rookie Mark Pysyk replaced Leopold after a one-game absence.

“I didn’t find out until I got to the game, so it was a little different,” Myers said about Leopold leaving.  “But I thought all the D handled it well.”

Leopold’s professionalism and personality influenced Myers and Pysyk. It was hard to talk to the veteran without hearing a one-liner.

Leopold quietly led the Sabres in ice time two years ago and averaged more than 22 minutes a game last season. While he struggled earlier this season, he had rebounded recently and was playing about 20 minutes.

The 32-year-old, an unrestricted free agent following the season, told the St. Louis Post-Dispatch he knew he would get traded. The Sabres received two draft picks.

“I got off to a rough start this year in Buffalo and ended up playing my best hockey when I came back from injury a few weeks ago. I look to just step in here and do what I’ve been doing lately.”

Myers and Pysyk have been filling some of Leopold’s minutes.

“It felt good,” Myers said about Saturday. “It’s whatever the coaches are going to decide how to play us. I think all the D have been doing a really good job adjusting what has been given to them.”

So far, Pysyk has adjusted to the NHL quickly in his first professional season.

“He’s been very consistent for us, shows a lot of maturity for us,” interim Sabres coach Ron Rolston said. “So he’s going to continue to get better and better for us.”

Pysyk, who played his seventh NHL game Sunday, made his first five appearances beside Leopold.

“I definitely looked up to him,” Pysyk said. “He made things pretty easy for me for my first few games. Yeah, it was a little bit weird seeing him go. He’s got a good opportunity playing in St. Louis.”

Sabres general manager Darcy Regier said Saturday that Pysyk, the 23rd overall pick in 2010, basically has a spot to lose.

Pysyk, however, believes he hasn’t secured a regular place yet.

“(I) could be here the rest of the year,” he said. “I could be going down at any time. So I still got to earn my time up here and make it tough for them to send me down.”

He added: “I feel thankful. I’m just pretty excited that every single day that I wake up that I’m still up with the Sabres. I’m still trying to keep that mindset.”

With only six defensemen, Rolston said the Sabres could summon one from Rochester.