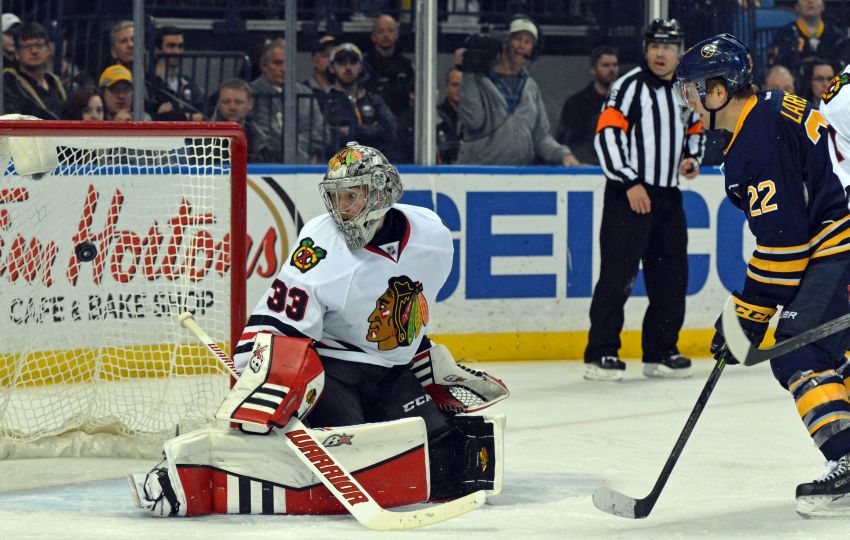 BUFFALO – In 47 seconds late Friday, the mood inside the First Niagara Center changed dramatically. The Sabres fans worrying their team would pull its most unlikely upset this trying season felt relieved as mighty Chicago Blackhawks quickly roared back.

When Chicago star Jonathan Toews tied it with 1:43 left, the building, which was filled with red Blackhawks jerseys, erupted.

Some hometown fans who had remained quiet as the Sabres erased an early 2-0 deficit and grabbed a 3-2 lead late joined in the cheering. Some even high-fived one another.

“When I scored, I didn’t hear too much,” said Sabres winger Marcus Foligno, who scored twice, his first goals in 24 games. “It is what it is right now. We know our fans are awesome.”

Some of those fans cheered for the 29th-place Arizona Coyotes last week. They want the Sabres to be guaranteed the first or second pick.

By losing in regulation, the Sabres couldn’t earn a point for their effort, meaning they’re stuck in 30th place, two points behind the Coyotes, who played late Friday. Four games are left this season. Finishing last means the Sabres can draft either Connor McDavid or Jack Eichel.

The late rally ruined what could’ve been the Sabres’ most satisfying win this season.

“I just looked at the way we competed, the way we worked,” Sabres coach Ted Nolan said. “I couldn’t be more proud of our bunch of guys.”

Sabres winger Tyler Ennis added: “We played well for 58 minutes against one of the best teams in the league. They showed what they can do when their back is against the wall.”

The Sabres looked cooked early, falling behind 2-0 by the 8:36 mark.

“We need everybody to play on this team,” Nolan said. “Certain guys just weren’t sharp in that first period. They take advantage.”

Then the Sabres got back into it.

“When we first played them in the beginning of the year, (a 6-2 loss), I think they just walked over us like we weren’t even there,” Nolan said. “It was a big improvement.”

“Really relieved,” Foligno said about scoring. “Obviously, I had a lot of chances previous games.”

Johan Larsson’s power-play tip, his fourth goal and 11th point in the last 12 games, tied it 5:29 into the third period.

Foligno put the Sabres up 3-2 12:42 into the third period, zooming to the net and gloving a pass before beating Blackhawks goalie Scott Darling.

“As much as you’re disappointed with the loss, a big bright spot for us, the way Marcus Foligno played,” Nolan said. “I thought he was really, really good the way he battled.”

Then Toews, who scored the winner with 31 seconds left Sunday in Winnipeg, his hometown, went to work.

“Good teams find a way to win, even on bad nights,” Foligno said.

After beating Anders Lindback in close, Toews whistled a shot by the Sabres goalie from the right circle.

“I think at that point any team would’ve been thinking about going to overtime,” he said. “Glad to have salvaged a point for a so-so effort in the third.”

The Sabres, who play tonight in New York against the Islanders, have plenty of positives to build on. The offense has at least three goals in six straight games. They outshot an opponent for the fourth straight contest, pumping 38 pucks on Darling. The Sabres have 143 shots in the last four games.

“I think it’s just confidence, everybody just being relaxed, knowing we got nothing to lose so you can make plays,” Foligno said about the offense. “When … guys are making a high-risk play that are getting rewarded for it, you got to do it.”

The Blackhawks played without superstar Patrick Kane, who’s recovering from a collarbone injury.