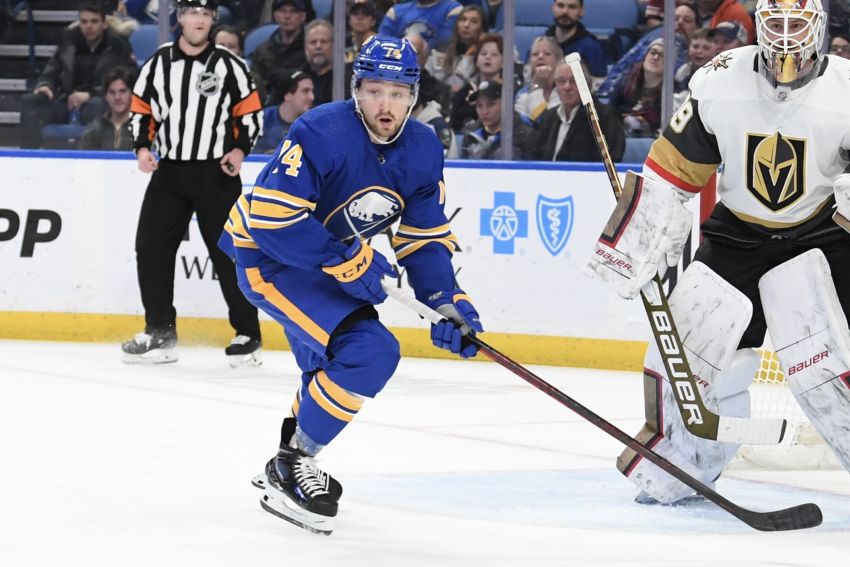 Rasmus Asplund has established himself as a tenacious presence for Buffalo. ©2022, Micheline Veluvolu

BUFFALO – On his dirt bike, Rasmus Asplund said it almost felt like he was whisked away to a different world. The Sabres winger would reach speeds of 60 mph and soar high into the air as he sped through the rugged track.

Being a competitive motocross racer was a thrill.

Long before Asplund, a tenacious on-ice presence, joined the Sabres, he raced dirt bikes in his native Sweden, becoming one of the country’s best in his age group.

Until he was 14 or 15, Asplund said he divided his time between hockey and motocross. He always finished his hockey season before he started racing and vice versa.

“It’s just a cycle I had when I was growing up,” he said.

Summer was racing season, and Asplund said he and his father would load his two dirt bikes onto their Mercedes Sprinter they converted into a sleeper and travel all over Sweden.

“We were home Monday, Tuesday, Wednesday, and then we’d head off for race weekend, wherever the race was, Thursday to Sunday,” he said. “So it was pretty fun summers.”

Asplund compared the motocross world in Sweden to “a big family that travels.”

“You’re meeting a lot of new people, new friends and all that,” he said. “So (at) the same time, it’s really competitive, too. So it’s a fun mix of people around you.”

Asplund developed into one of the country’s best young racers, finishing between 10th and 15th in the national championships for the 12 to 15 age group.

“So I guess I was pretty good,” he said.

But Asplund, a top hockey prospect in his early teens, couldn’t fully devote himself to motocross.

“The problem was, for me, when I started to play hockey in August or September, all the other kids my age, they moved down to Spain so they could race all year round,” he said. “So I just fell behind more and more the more the years went. I was obviously better at hockey, so it felt pretty natural to go over to hockey full time.”

When Asplund joined the Färjestad hockey organization, he gave up racing. He said choosing hockey was an easy decision.

“I was one of the top guys in the country in hockey and all that, so it was just natural to choose hockey,” he said.

“Just the lifestyle, just the way everything was in that world was a lot of fun and I enjoyed it a lot,” he said.

Asplund, of course, believes racing has helped his hockey career. Riding left him alone on a stage, and if something went wrong, he couldn’t hide.

“Just being in an individual sport like that you can’t really hide behind someone else or something else, it’s just you,” he said of racing. “If you don’t perform or if (you’re not) feeling well, it’s on you. … So I think that’s a huge part that helped me a lot.

“Obviously, the competing and all that stuff, it’s just natural for me to compete, and it was the same in motocross.”

These days, Asplund can’t even ride for fun. He got rid of his bikes years ago. But the racer still resides in him.

He said he watches the AMA Supercross series in the United States. He also loves to use his knowledge of engines.

“I know a lot about engines, if something is broken down, whatever, it’s a car or something, I usually have a pretty good sense of what’s wrong,” he said. “So it’s pretty cool. It’s a good thing to have in my backpack, I guess.”

The Sabres, having opened up a two-goal lead on the New York Islanders, weren’t pressing to score. So Granato felt it was a good time to let Power, 19, experience his first prolonged power-play action in his sixth NHL game.

“It was a different situation late,” Granato said following the game. “We didn’t need to score. I called our guys over and I said, ‘Hey, we can score and we probably have a better opportunity to score, but we’re going to tactically go about it this way, quick.’

“And they executed, you saw us generate some chances that we could’ve scored, probably better looks than we had on earlier power plays by being a little bit more patient, and Owen was a big part of that. We knew he could handle that objective that we laid out, he did a nice job with it.”

The Sabres, who play their final road game this season Thursday against the Boston Bruins, had Tuesday off.