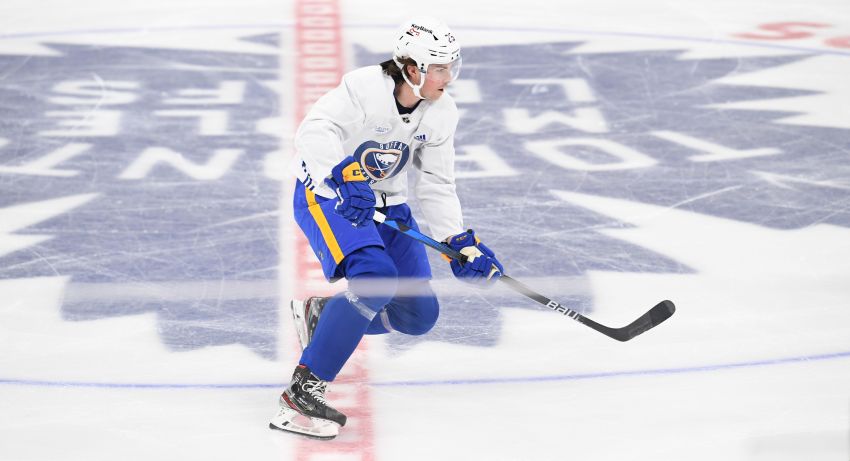 BUFFALO – In a few weeks, after his dizzying year ends, Sabres rookie Owen Power might finally have a chance to sit back and enjoy a little time to himself.

Power, 19, had endured a grueling season prior to signing his entry-level NHL contract, leaving college to represent Team Canada at the Olympics more than 6,500 miles away in Beijing and at the World Junior Championship in Edmonton.

Even in the NHL, Power still has schoolwork to complete. The defenseman left college during the semester, so once he’s done at the rink, he returns to his hotel room and jumps online for classes at the University of Michigan, where he’s a sports management major.

“I don’t think he’ll even realize all that happened until he decompresses, because to him, it’s hockey, it’s exciting for him,” Sabres coach Don Granato of Power’s season. “I think each challenge has been exciting for him. … He’s in it like all the guys, and there’s just a constant surge of adrenaline it feels when you’re into it, and he presents that way.”

If the Sabres had 35 or 40 games remaining when Power joined them, Granato said he might’ve been concerned the youngster could run out of gas. But they had just eight contests, a number Granato believes will help Power develop a feel for the NHL.

“He goes into a summer of training and he’s at eight games against good NHL teams and players,” Granato said. “He has that 20/20 hindsight coming into next season. He knows what he’s training over the summer, he knows what it’s like to play against guys of this caliber. So I think it’s the right amount.”

Incredibly, Power, the first overall pick in 2021, has probably exceeded expectations just one week into his career, assimilating on and off the ice.

The Sabres, who pride themselves on the tight-knit environment they’ve created, have warmly welcomed him. Alternate captains Kyle Okposo and Zemgus Girgensons took Power out to dinner when he joined the Sabres in Tampa Bay.

“I was able to ask a lot of questions kind of about their careers and everyday life in the NHL,” Power said. “So I think it was nice to have two older guys kind of take me out to dinner.”

Following his debut last Tuesday, they presented him with the sword as their player of the game. When he recorded his first point, Thursday, winger Alex Tuch made him lead the handshake line.

Not surprisingly, each game, Power displays more confidence, aggressively moving up in the play.

Teammates, of course, knew Power possessed a dynamic package of skill and smarts. Still, seeing him up close has wowed them.

“The big thing for me was I didn’t realize how well he can move offensively,” Sabres center Peyton Krebs said. “Yeah, he’s been a lot of fun to watch.”

Sabres winger Casey Mittelstadt said: “I didn’t know that he moved that well and was that offensive. So it’s been a really, really pleasant surprise for me. I’ve been super impressed. I think everyone has.”

Power’s ability to quickly process his mistakes has also helped him thrive.

“His base of details, positional knowledge, system awareness, time and space is all really, really that I think he can readjust immediately once he realizes why I moved my stick a little bit too soon, he knows the next time not to do it,” Granato said. “We can see those little things happening within (the) game. The next shift he goes out there, highly unlikely for him to make the second mistake twice.”

Power has made an immediate impact in the big leagues without practicing much. Tuesday was just his third formal session with the Sabres. They play four more games over the final 10 days, so he can have consistent practice time.