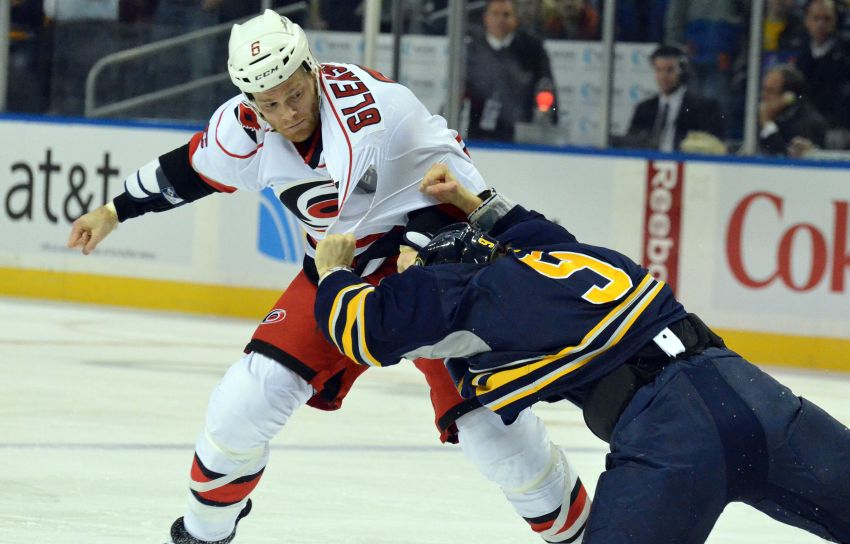 But following Friday’s 3-1 loss to the Carolina Hurricanes before 18,824 fans inside the First Niagara Center, Ruff finally had enough.

The top trio of Cody Hodgson, Jason Pominville and Thomas Vanek will remain intact. With another goal from Vanek on Friday, the NHL’s hottest line has scored nine the team’s 11 goals, meaning the other 16 skaters who’ve dressed this season have two goals through four games.

Tyler Myers and Steve Ott have the Sabres’ other scores. That’s it.

The Tyler Ennis line, so dominant late last season, has been a dud so far, registering just two assists.

“I tried to be patient tonight,” Ruff said. “I was hoping the Ennis line would catch a little traction. But I think right now we can try anything going into the next game. You’ll probably see some lines get (shaken) up. But that top line will stay where it’s at.”

It briefly looked like Vanek’s power-play goal 1:56 into the third period might hold up as the winner. But Alexander Semin’s power-play score tied it at 3:31.

Then another faceoff loss – opponents have been destroying the Sabres on draws this season – doomed them.

Ennis lost the faceoff to Eric Staal, who drew it back cleanly to Jay Harrison at the right point. The defenseman beat Sabres goalie Ryan Miller at 15:10.

“It’s tough. It’s a learning curve,” Ennis, a former winger, said about taking draws. “Sometimes it’s tough when you lose one, it goes in and you lose the game. I’m just going to work on it. Maybe we’ll have my linemates take a few or something.”

The Hurricanes won 42 of 65 draws Friday.

With Vanek off for a late cross-checking call, Jeff Skinner added a power-play empty-net goal.

Vanek, who already has three goals and nine points, was whistled for three minors Friday, including a slashing call followed by a quick unsportsmanlike conduct penalty.

“Thomas is off to one hell of a start. He’s played awesome,” Ruff said. “The effort on the goal and the shot was tremendous. … The way they’re calling the game we have to adjust as a team and as players. You can’t let your frustration overtake you. We need him out there. We need him in there late.”

A muscle strain briefly knocked Vanek out of the game. Ruff thought he wouldn’t return. He said the Austrian likely won’t practice today.

Ruff wanted the Sabres to get better matchups against Staal, who torched them for three goals in Thursday’s 6-3 win in Carolina.

The Russian received zero shifts during the third period and just two after the opening 20 minutes.

“We tried to be a little bit harder on Staal,” Ruff said. “We used Ott and (Patrick) Kaleta and Jochen Hecht against him. I thought for the most part we did a pretty good job against him. Van was missing for a little while, we dropped to three lines.

“I just felt once we hadn’t played for a long period of time it wasn’t really fair to stick him in the fire. I called him once in the third and recalled because I don’t think it’s fair to put him in that spot.”

The Sabres usually place their top prospects on top lines with talented offensive threats. But Grigorenko mostly played beside seldom-used tough guy John Scott (he of one NHL goal) and Nathan Gerbe.

Grigorenko had been skating with Ott and Jochen Hecht earlier this week.

“It’s the coach’s decision,” Grigorenko said. “He thought it would be better for the team. I was just waiting to hear if I was going to go out on the ice. I understand my role with the team and I’m just happy to be here.”

Grigorenko can play one more game before the first year of his entry-level contract kicks in.

Miller quietly had another strong night for the 2-2 Sabres, stopping 39 shots.