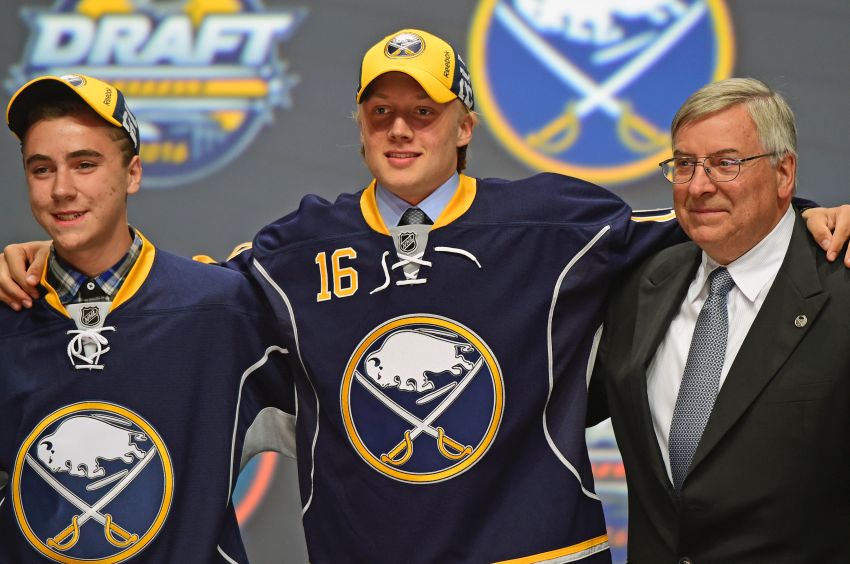 BUFFALO – Swedish winger Alexander Nylander and his older brother, William, are close. Before the Sabres drafted Alexander eighth overall Friday, he spent the entire day with William, someone he has leaned on for advice throughout the NHL Draft process.

“It’s going to be a lot of fun playing against my brother,” an excited Alexander said inside the First Niagara Center. “I think the rivalry is big.”

No kidding. Now, it’s even bigger. In the span of about an hour Friday, the rivalry grew immensely, as the hated Leafs, who were booed loudly all night, drafted Arizona-born center Auston Matthews first overall.

Nylander knew the Sabres wanted to draft him badly. When general manager Tim Murray spoke with him again Friday morning, he told Nylander he would see him later. Nylander, Murray said, “was beaming.”

“I had a really good feeling since I talked to them before,” Nylander said.

Why did Murray pick Nylander?

The Sabres need that to compete in today’s NHL.

“You hear everybody in the league talking about Pittsburgh wins with speed and skill and that,” Murray said. “That’s what we’ve been trying to do here the last couple years. We don’t have enough of it yet. We’ve made strides. But to add a guy like him, who we think is a top-six forward, just kind of fit into our blueprint.”

To Murray, Nylander “has the pedigree.”

“He was very clear from the start – and a lot of players say it – he wanted to come here,” Murray said. “This was a place that he targeted, and actually I believe him.”

As the picks went off the board, Nylander thought some teams might snatch him before the Sabres. He mentioned the Calgary Flames, who selected forward Matthew Tkachuk sixth.

The Sabres could have picked Jakob Chychrun or Mikhail Sergachev, two defensemen ranked high. Murray also said he called a team about moving up and talked with Ottawa Senators GM Pierre Dorion about moving back several spots.

Meanwhile, Nylander felt nervous waiting. Still, he said he “enjoyed every minute of it.”

Joining the Sabres, Nylander said, is “perfect.” The crowd roared when Murray announced the selection.

The Sabres have four options for Nylander next year: the NHL, a return to junior, Sweden or the AHL, an intriguing option considering most CHL players can’t play in that league.

“There are lots of options most players don’t have,” Murray said,

Murray had options to grab another first-round pick later in the night.

“I’m not that fond of the stage to pay a price that’s not worth it just because we’re home,” he said.

Murray made no trades Friday, although he’s “talking to a couple teams.”

The Sabres have 10 picks today, starting with the 38th selection. Murray said the Sabres don’t have a focus and will take the best available player or best fit.