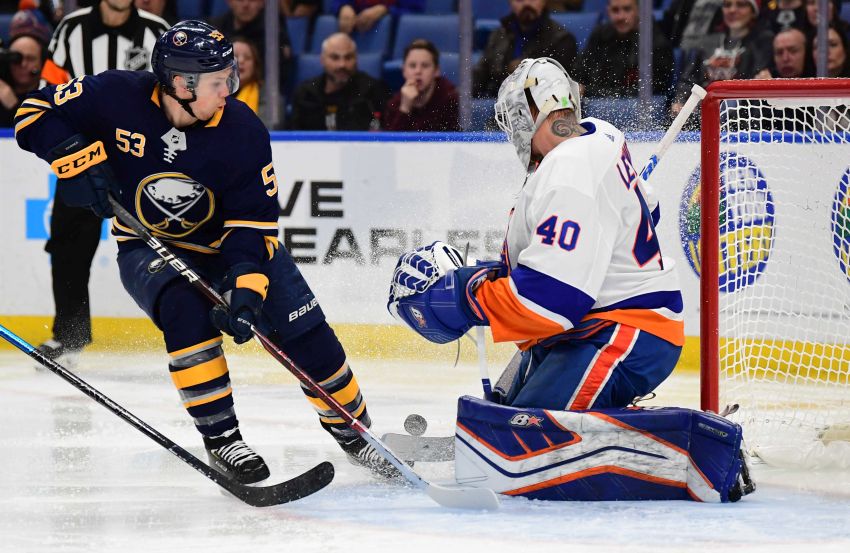 BUFFALO – Suddenly, after weeks of regularly shirking their duties and allowing four or five goals a game, the Sabres have started clamping down defensively.

Tuesday’s 3-1 victory against the New York Islanders doesn’t rank among their most exciting triumphs this season. But if the 10th-place Sabres grab a playoff spot, it will likely be because they can replicate their recent efforts down the stretch.

“It’s the time of year you need to defend to win games,” said Sabres winger Jason Pominville, who connected captain Jack Eichel’s nifty backhand pass to score the winning goal 6:49 into the second period. “I think everybody’s starting to realize that.”

Sabres winger Kyle Okposo said: “The way that we were giving them up, just kind of standing around in front, not taking our guys, it was a big wake-up call for us, because if we’re going to make the playoffs, we need to be really, really good defensively.”

The Sabres gutted out a victory against the NHL’s stingiest team before a crowd of 16,894 inside KeyBank Center. The Islanders have quickly transformed into a powerhouse under new coach Barry Trotz, executing a rigid system. After a weak start, they started ripping off wins in late October.

Right now, the Islanders rank first in the Metropolitan Division.

The Sabres, who sprinkled only 10 shots on old friend Robin Lehner, one of the NHL’s best goalies this season, through two periods.

“They check well for 60 minutes and they don’t give you a lot of room,” Eichel said.

Still, the Sabres made their chances count.

After winger Jeff Skinner scored his team-high 34th goal – he’s on pace for exactly 50 over a full season – from the right circle at 16:25, Casey Cizikas roofed a shot from the slot by goalie Linus Ullmark at 19:37.

The Sabres, however, responded. Eichel found Pominville in front, restoring the lead.

“We stuck to our game,” Sabres coach Phil Housley said. “We get that early goal in the first, which we settled into our game after that. We got a lot of quality offensive zone time and good looks. …

“I liked the way our guys responded. Giving up a goal at the end of a period can maybe affect you going into the second period. We come back and get that second goal. … That’s the way it’s going to be coming down the stretch here. It’s not really flashy but it gives you an opportunity to win hockey games.”

Eichel also assisted on Skinner’s goal, giving him more assists than shots (one) on the night.

“A night like tonight where there’s not a lot of open space, you’re not going to be making a ton of highlight-reel plays, because there’s just not a lot of room out there,” Okposo said. “He gets two big assists and was definitely a factor in the game.”

Sabre center Johan Larsson sealed the game 17:35 into the third period, burying Okposo’s shot from the slot as it trickled toward the goal line. The other member of their line, winger Zemgus Girgensons, created the play by forcing a turnover.

“It’s just about their work,” Housley said of why the line has meshed so well.. “They keep the game simple. They get it in deep and go to work. When they’re in the zone they hang on to pucks, they’re tough to play against down there.”