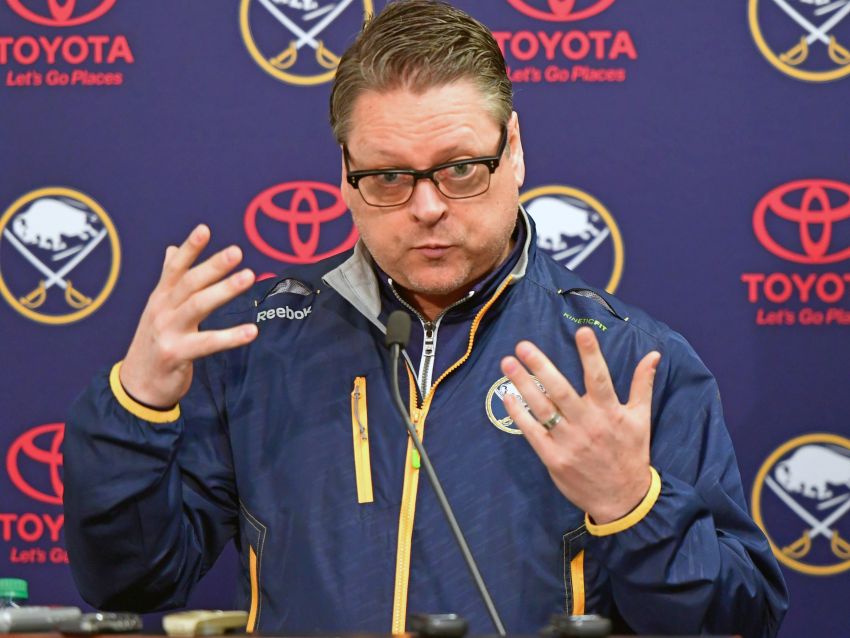 “He’s my coach today, I’m the general manager today,” Murray said this afternoon during his end-of-season news conference inside KeyBank Center. “There’s a review top to bottom. I have to meet with ownership next week in Florida. I’m sure I’ll be reviewed, I’m sure I’m being reviewed right now, as I should be.”

Murray shouldered his share of the blame, too. Before he began his 30-minute question-and-answer session, he said he wanted “everybody to know that top to bottom in the organization, we understand it was a very disappointing season.”

“I’m the general manager of the team, so I guess that’s top of the food chain when it comes to hockey, so I stand here and take full responsibility for our position, our standings and how it finished,” he said.

Murray wants everyone to evolve. In holding exit interviews with players, he said he learned the Sabres must “be clearer in our message.”

What falls on the coaches? A lot, of course. Murray mentioned he wants them to prepare differently.

Instead of breaking down video for three hours, he wants them to become more personable with the players.

Check back for later for much more from Murray, who had no update on winger Kyle Okposo, who was discharged from the Neuro Surgical ICU at Buffalo General Hospital on Friday, according to WIVB.

Murray also said the Sabres have been talking to goalie prospect Cal Petersen, who just finished his junior season at Notre Dame, daily. Petersen hasn’t decided whether to leave school yet, however.

Murray also said he wants to talk to center Jack Eichel about a contract extension July 1.