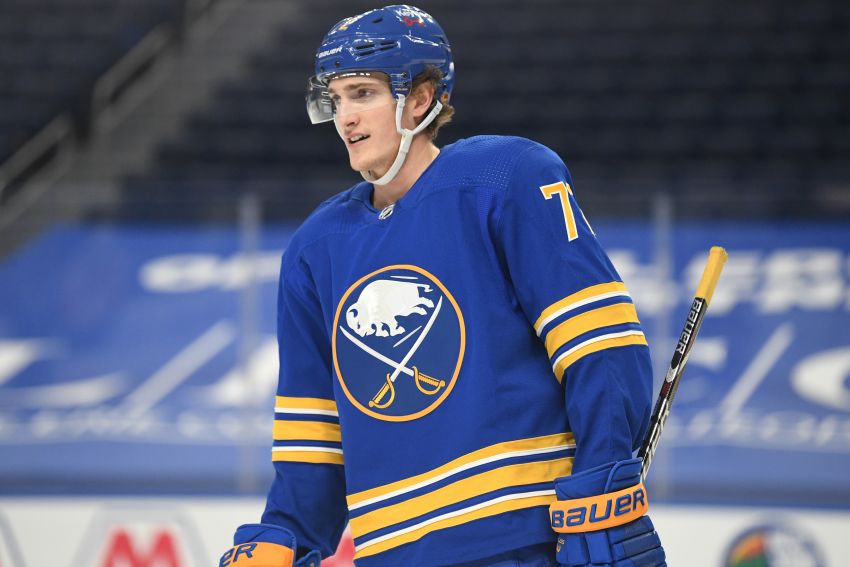 Tyce Thompson said he was speechless. Not only will the New Jersey Devils forward be making his NHL debut tonight, he gets to do it against his brother, Tage, a Buffalo Sabres winger.

“It’s the best way you could draw up a debut,” Tyce Thompson said on a Zoom call prior to tonight’s game. “To be able to play against my brother just makes it that much more special.”

Tyce Thompson, 21, signed his entry-level contract with the Devils last week. He said coach Lindy Ruff called him Monday and told him the special news.

The Thompsons’ mother, Kim, will be at Prudential Center tonight, Tage said. Their father, Brent, who coaches the Bridgeport Sound Tigers, the New York Islanders’ AHL affiliate, will also try to make it to Newark.

“It’s awesome,” Tage Thompson said. “Obviously, I think from a very young age it’s something we both knew we wanted to do – play in the NHL. Now that that dream’s becoming a reality and for my mom, all the sacrifices and stuff she’s had to do, growing up, for her to be able to watch us on the same ice now, playing against each other has got to be pretty rewarding feeling for her as well.”

Tyce Thompson spent three seasons at Providence College, where he was teammates with Sabres defenseman Jacob Bryson as a freshman. Thompson compiled 38 goals and 94 in 101 career NCAA games.

“The thing you’ll notice the most is his work ethic,” Tage Thompson said of his brother. “He’s an extremely hard worker, he’s really fast, very intense, and he’s got really good poise with the puck and makes really good plays.”

Interim Sabres coach Don Granato understands what a special night the Thompsons will enjoy. His sister, Cammi, was inducted into to the Hockey Hall of Fame in 2010. His brother, Tony, played 13 seasons in the NHL.

The Granato brothers coached together at Wisconsin in 2016-17.

Don Granato said he watched the Thompson brothers play at USA Hockey festivals and tournaments when they were younger. He later coached Tage Thompson at the U.S. National Team Development Program.

“When I first saw both of them play, it was really easy for me to see that the potential was there,” Granato said. “To actually be part of it knowing the family, having coached Tage at the amateur level, this is pretty neat to be a part of.”