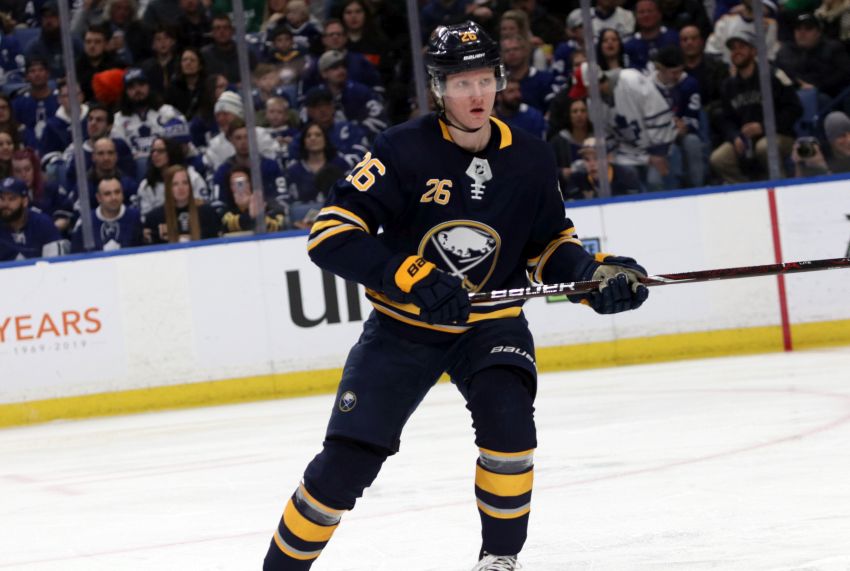 BUFFALO – Sabres defenseman Rasmus Dahlin grew up far away from the NHL in Trollhattan, Sweden, a city of 46,000 about a three- or four-hour car ride from Stockholm.

“Most of my friends have never seen an NHL game before,” the rookie said Thursday inside KeyBank Center.

So the thought of playing two regular-season games in front of his family and friends next season had Dahlin smiling Thursday. The Sabres will face the Tampa Bay Lightning Nov. 8-9 at Ericsson Globe, a 13,850-seat arena in Stockholm, as part of the NHL’s Global Series, the league announced Thursday.

Dahlin, who said he never watched an NHL game in person until last spring, can’t wait for the European contests.

“I (am) so happy to get a chance to meet my family and friends in the season,” Dahlin said. “It’s amazing.”

He added: “We are sleeping when the NHL is on. Everyone gets a chance to watch an NHL game live. It’s amazing.”

The contests will certainly be attractive in Sweden. Tampa Bay, which has earned a whopping 118 points through 74 games, is a star-studded team.

Despite their recent struggles, having Dahlin, 18, and other Swedes makes the Sabres an attractive team to go overseas.

“There are lot of fans back home that root for Tampa, obviously because of Victor Hedman, but because of all their stars,” said Sabres goalie Linus Ullmark, another Swede. “I think it’s going to be a big party back home.”

Naturally, Ullmark, who left Sweden in 2015 to begin his North American career, would love to play one of the games.

“It would mean a lot to me because you’re on your home turf and you’re playing in front of your fans and family that might not be able to come over here,” Ullmark said.

Right now, the Sabres have two other Swedes – center Johan Larsson and winger Alexander Nylander, whose family lives in Stockholm – on their roster.

They also have some Swedish prospects playing with the Rochester Americans – defenseman Lawrence Pilut and forwards Rasmus Asplund and Victor Olofsson – who could be crack the NHL next season.

“Hopefully they can make the team next year,” Dahlin said. “As many Swedes as possible is more fun.”

Ullmark said he would love to take his teammates to Gamla Stan, also known as “Old Town,” a medieval city center in Stockholm.

Next season will mark the Sabres’ 50th anniversary.

While the sample size is small – just five games – Nylander, 21, has enjoyed his best stretch in the NHL since the Sabres recalled him March 10.

After a two-assist outing in Sunday afternoon’s 4-3 shootout win over the St. Louis Blues, he shook off a slow start and scored late in Wednesday’s 4-2 loss to the Toronto Maple Leafs.

“It’s great for me to play with a pair like that,” Nylander said. “I’m still playing with Sheary, which is going to be really good for us. I’ve just got to keep moving my feet every game here and play simple, getting pucks to the net.”

Nylander, the eighth overall pick in 2016, said it’s easier to read off a star player like Eichel.

“You know what he’s going to do, you know he can make plays and you know he can shoot the puck, too,” Nylander said. “You’ve just got to be aware all the time on the ice whenever he has the puck, because it can be right on your tape next. It’s going to be really fun. I’m looking forward to it.”

Sabres defensemen Zach Bogosian and Matt Hunwick missed Thursday’s practice. Housley did not speak following the session, so an update will likely be available Friday.

One thought on “Swedish Sabres excited about playing games in Stockholm”