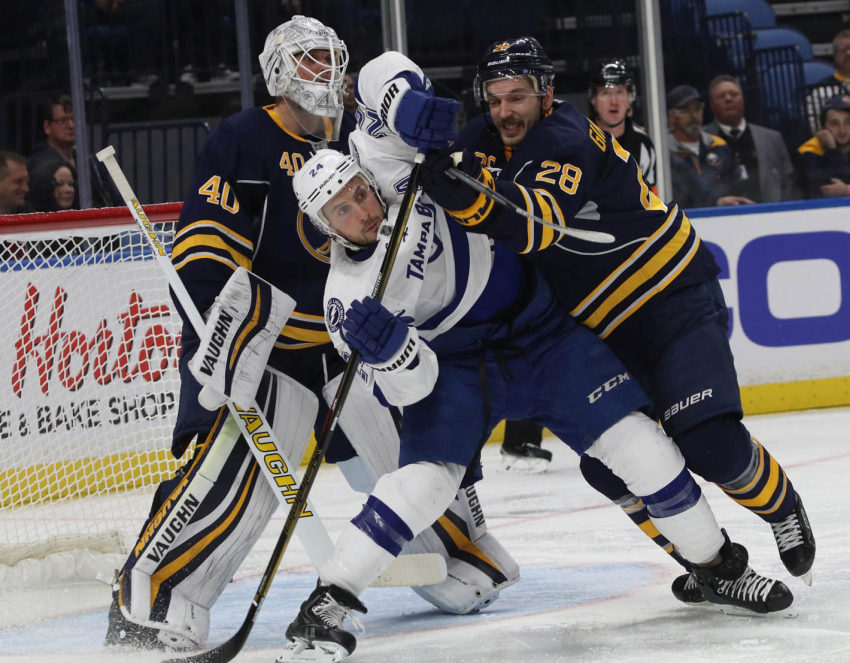 BUFFALO – Early in the second period of Thursday’s dreary 4-1 loss to the Tampa Bay Lightning, goalie Ben Bishop gifted the Sabres’ anemic offense a chance it sorely needed to tie the game.

Stationed behind his net, Bishop blindly threw the puck up the middle of the ice to a waiting Kyle Okposo. The Sabres’ leading scorer then quickly let a low wrist shot loose toward the open net.

“That one was on the board,” coach Dan Bylsma said following the Sabres’ sixth straight loss. “I still don’t know quite how the goaltender comes over and gets it.”

Bishop scurried back and dove across his crease to glove the shot, stunning the Sabres and the crowd of 17,870 fans inside KeyBank Center. Look for the save replayed on highlight reels all season.

Okposo figured Bishop was out of the play and had no chance.

So does the Sabres’ long losing streak. A week before Thanksgiving, only 17 games into what was supposed to be a breakout season, the 5-8-4 Sabres look finished.

“This is the definition of adversity for us,” Sabres defenseman Cody Franson said. “We’ve played games where we’ve done a lot of good things, created a lot of good chances, and we’ve hit posts or the goalie’s made a big save. …

“A couple of bounces here and there, it could be a completely different story that we’re talking about right now.”

The Sabres have scored a league-low 31 goals. They have only seven scores during their current 0-4-2 run and have scored two or fewer goals in every contest.

“We’ve got to find a way to create more and not even create more, just bare down and bury them, just get hungrier,” Sabres winger Evander Kane said. “And I think that’s the theme. It must be a joke right now. If you score two goals against the Buffalo Sabres, you’re going to win the game. And we’ve got to end that.”

Has Okposo ever experienced a stretch like this before?

Sure, some of the Sabres’ woes can be blamed on injuries. Right now, six regulars are injured, including top centers Jack Eichel and Ryan O’Reilly. A high left ankle sprain has sidelined Eichel all season.

But the Sabres have clearly regressed following a 27-point improvement last year. They’re 1-4-2 at home this season and have scored eight goals. Thursday kicked off a four-game home stand.

Of course, bad luck has also stymied them. They consistently hit posts and miss glorious chances.

In the second period, Sam Reinhart shot the puck into Bishop instead of hitting an opening net.

“The frustration (was) building with getting looks, getting empty nets, getting golden opportunities and kind of the feeling you’re snakebitten and you’re struggling to find a goal,” Bylsma said.

“It’s frustrating to have so many opportunities that you do and they’re not going in,” Okposo said. “You just have to stay with it. It’s still early, but at the same time, there are teams ahead of us are getting points. We got to keep pace. We can’t fall too far behind, otherwise we’re going to be out of it.”

Frustrated fans act like the Sabres are already out of it. They booed throughout the game and sounded restless. What remained of the crowd booed again when the final horn sounded.

Nikita Nesterov and Alex Killorn put the Lightning up 2-0 before Franson scored on the power-play 12:50 into the second period, the first goal from a Sabres defenseman all season.

Goalie Robin Lehner made 32 saves for the Sabres, who face a stiff task Saturday in the Stanley Cup champion Pittsburgh Penguins.

It could get uglier before it gets better.