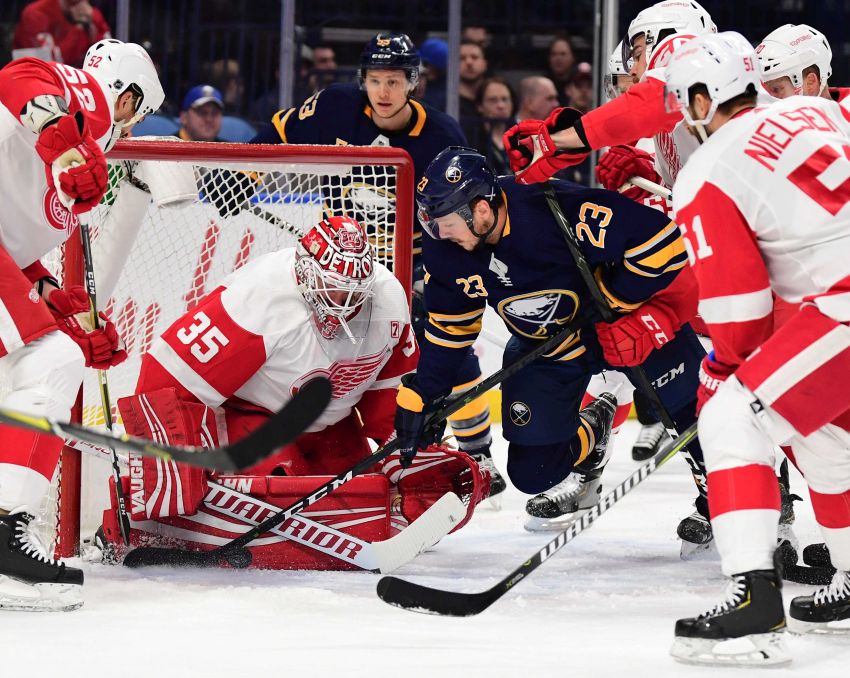 BUFFALO – Rookie Victor Olofsson heard Jack Eichel calling for the puck, so he quickly spun around along the right boards and adroitly fed the Sabres captain as a zoomed down the slot.

“I was just trying to get it in there in the middle,” Olofsson said following his NHL debut, a 5-4 overtime loss inside KeyBank Center. “It was a great finish by him.”

Olofsson, who looked terrific all night, had his first point. Eichel, meanwhile, had his 100th NHL goal.

The slick chemistry the new linemates showcased beside Sam Reinhart – Eichel, 22, and Olofsson, 23, haven’t even practiced together yet – provided the Sabres an opportunity to win just their third game this month.

While they fell short in overtime – Tyler Bertuzzi scored his second of the night at 2:18 – the Sabres at least made Thursday’s contest entertaining.

Fresh off Tuesday’s embarrassing 4-0 road loss to the Ottawa Senators, they responded by pouncing on the Red Wings – they had an 11-1 shot advantage early in the first period – and erasing two two-goal deficits.

“Totally different game,” said an upbeat Phil Housley, whose Sabres have lost five straight games and 18 of their last 21 (3-15-3).

Olofsson’s presence clearly helped ignite the Sabres, who had been shut out four times in the previous nine outings.

“He brought a really good spark to our team,” Eichel said.

Olofsson utilized his lethal shot early and often, pumping five shots on goal and also hitting the crossbar. The Swede looked comfortable from the get-go, generating a scoring chance on his first shift.

“I feel like it was a pretty good game,” said Olofsson, who was recalled from the Rochester Americans on Wednesday.

Housley said: “He played his own game. He was shooting the puck, he was creating offensively, his wall play was very good. He was very poised.”

Olofsson, however, missed the net in overtime, giving the Red Wings the possession that created Bertuzzi’s goal.

“That’s a big mistake by me,” Olofsson said. “I mean, that happens of course, but I’ve got to learn too.”

Olofsson, whose 27 goals topped the Swedish Hockey League a year ago, will likely stay up for the final five games before returning to Rochester for the AHL playoffs.

But next season, the winger could stick in the NHL for good.

So could some other youngsters. With the Sabres battling injuries and playing out the string, they’ve been examining some of their best prospects up close.

In addition to Olofsson, defensemen Will Borgen and Lawrence Pilut and winger Alexander Nylander also played against the Red Wings.

Rookie center Casey Mittelstadt, who has stayed in the NHL all season, scored the Sabres’ third goal and also had an assist.

“It’s good to have young guys around, because they have short memories,” Housley said. “They want to make a difference. All their intentions are in the right place, they’re good people, they’re good teammates and they’re trying their hearts out.”

Eichel said: “They bring a spark this time of year. We talked the other night, everyone’s playing for something right now and I thought a lot of our young guys brought some really good energy and they fit right in.”

Of course, perhaps the smallest crowd of the season – the Sabres generously announced 16,236 – watched Thursday’s game. Chunks of blue seats were visible in the corners of the 300 level.

By the time Eichel tied it, many fans had already left.

Winger Kyle Okposo’s power play goal 6:12 into the second period got the Sabres within 2-1. Defenseman Marco Scandella tied it later in the period.

Dylan Larkin scored twice for the Red Wings, his 29th and 30th goals. Filip Hronek had their other goal.