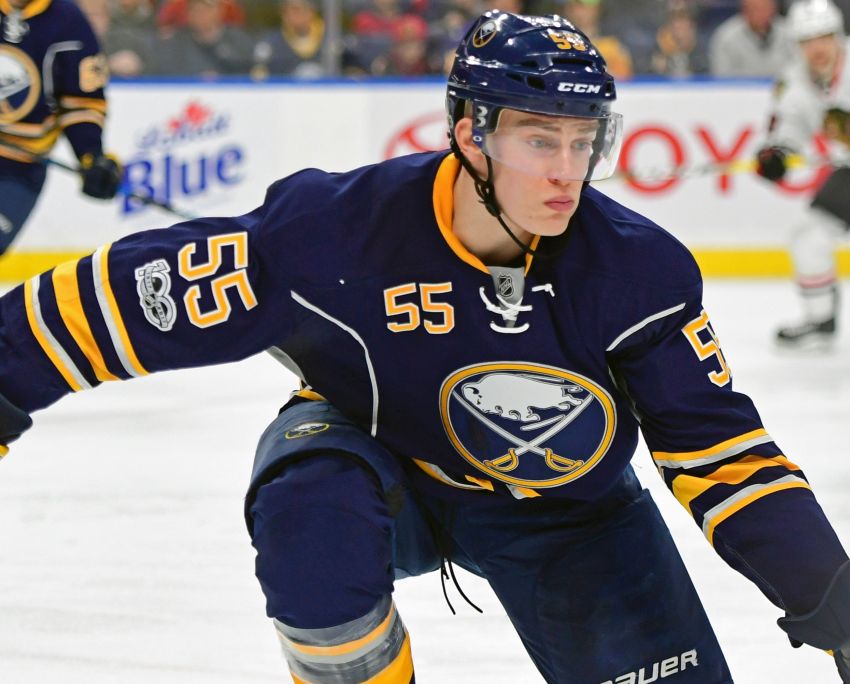 BUFFALO – Back in August, a crew in Rasmus Ristolainen’s native Finland filmed the Sabres defenseman utilizing some slick shootout moves – in the video, he dekes right before deftly backhanding the puck in with just his left hand – during a practice session.

At the end of the clip posted on Youtube.com, Ristolainen says in Finnish he would showcase the same moves if he received an opportunity in an NHL shootout.

This season, the Sabres lost six of their first seven shootouts, scoring just two goals. Still, Ristolainen, who has 43 points, was never used.

But on Friday, down a goal nine rounds into a shootout in Anaheim, Sabres coach Dan Bylsma finally tabbed Ristolainen, 22, for his first chance.

Zemgus Girgensons scored in the 10th round, clinching the Sabres’ 2-1 win.

The highlight, however, was Ristolainen’s goal, which has been all over the internet for two days.

“I’ve been saving (it) because I haven’t shot yet,” Ristolainen said Sunday inside HarborCenter. “That’s my move.”

What about that video from seven months ago?

“I actually forgot it,” Ristolainen said. “I saw it (Saturday) morning. It was pretty funny.”

Bylsma, who joked he wanted Ristolainen to simply shoot the puck, didn’t expect a wild move.

“We needed a goal,” he said. “It was a big moment. He kind of had his mind made up based on the scouting report that he was going to try that one. (He) made it look good.”

Ristolainen has looked good throughout his fourth NHL campaign, piling up minutes and points while cementing his status as the team’s No. 1 defenseman.

The workhorse has averaged a team-high 27 minutes, one second of ice time a game, the league’s fourth-highest total.

Bylsma has said for months he wants to lighten Ristolainen’s workload, something he repeated Sunday. But injuries and a weak defense corps have tied his hands.

Don’t expect Ristolainen to get any relief soon. Right now, the Sabres have four injured defensemen. They must recall two prior to tonight’s tilt against the Detroit Red Wings, the finale of a four-game road trip and their final visit to historic Joe Louis Arena.

“The workload is fine,” Ristolainen said. “I don’t feel it too much.”

“The problem with Rasmus playing 30 minutes is he just plays them so hard, so physical,” Bylsma said. “He’s all in when he plays 30 minutes like that, and that’s tough for anybody to do. There are some guys who play that much in their careers and tend to manage it a bit better than Rasmus.

Ideally, Bylsma said he would like Ristolainen to play about 25 minutes or less.

“But given situations like we’ve had in the last couple (games) – some injuries and some people going down – he’s more than capable of carrying the load,” he said.

Ristolainen said: “My trainer back home does a good job, good program. I’m in good shape.”

A year ago, Ristolainen starting wearing out down the stretch. This season, he has responded better, although he has still struggled at times. He compiled a career-worst -5 rating March 7.

Handling a heavy workload is more than physical. To Sabres defenseman Josh Gorges, Ristolainen’s partner for almost two years, the maturity his friend has developed helps him thrive.

“He’s taken on that challenge of being the No. 1 guy on our team and a top player across the league,” Gorges said. “He wants that, and I think that’s been his biggest thing is his ability to go every night against the best players in all situations, log the minutes he does. It’s been impressive.”

Ristolainen’s point total is impressive. He needs only seven more to become the first Sabres defenseman to hit 50 since Garry Galley had 54 points in 1995-96.

“It means a lot of points,” Ristolainen said. “I guess I’m pretty close there. I don’t (judge) my game by how many points I get. There’s a lot of other things, too.”