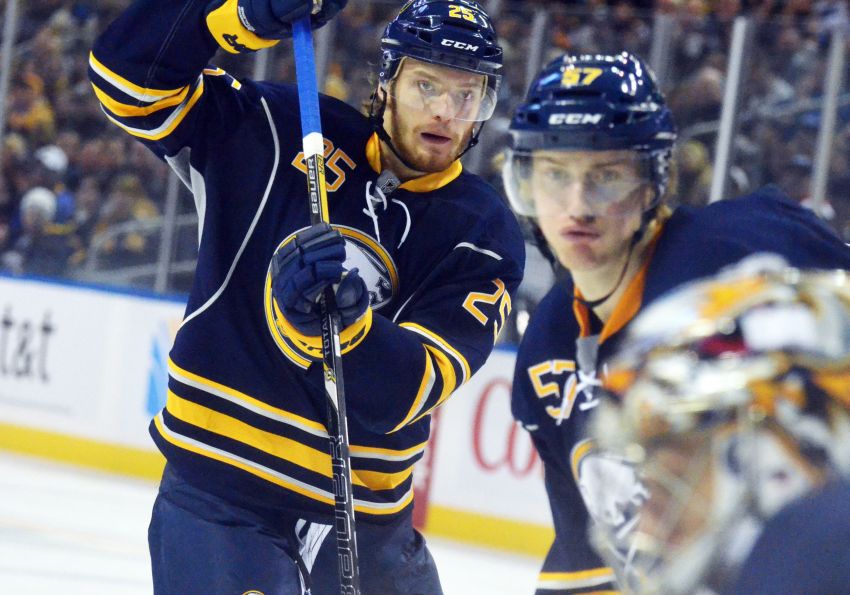 BUFFALO – The fun part, slick Sabres prospect Mikhail Grigorenko said, comes when he touches the puck and makes a play on NHL ice.

“You realize you’re in (the) NHL and you did something good,” the 18-year-old said Monday after the Sabres prepared for tonight’s tilt against the Toronto Maple Leafs inside the First Niagara Center.

Grigorenko set his sights on the NHL as a child growing up in Khabarovsk, Russia, a city just 19 miles from the Chinese border and nearly 6,000 from Buffalo.

For 16 days, the center’s been living his dream with the Sabres.

But Grigorenko’s NHL run could be ending soon, at least for this season. The rookie played his fifth game Sunday. His next appearance activates the first year of his three-year, entry-level contract.

Do the Sabres, losers of three straight contests, burn that year in a lockout-shortened 48-game season? Or do they send the pointless Grigorenko back to the QMJHL, a league he was dominating with the Quebec Remparts? Remember, he’s too young to play in the AHL.

He practiced Monday inside the FNC, although it’s unclear if he’ll play tonight.

Coach Lindy Ruff said the Sabres “don’t have to” make a decision on Grigorenko’s future yet.

Beyond Grigorenko’s play, which Ruff liked while skating him a career-high 17:10 during Sunday’s 3-2 loss in Washington, the Sabres are weighing several other factors.

The Sabres could also scratch Grigorenko and “stash” him for a bit. Practicing against elite talent and watching from the press box might be beneficial.

“That’s one of the considerations,” Ruff said about sitting Grigorenko. “I thought he held up very good in (Sunday’s) game. (He had) a great opportunity to score.”

Grigorenko refused to say if he should stick around.

Sabres defenseman Tyler Myers experienced Grigorenko’s uncertainty as a 19-year-old three years ago. Myers established himself as an NHL force almost immediately. But the Sabres wouldn’t tell him he if was staying.

“I was glad that the (trial was) over and I finally knew what my situation was,” Myers said. “I think the worst part was not knowing. The game took my mind off it pretty well. I just focused on playing.”

Myers found out he was staying when he saw his name in the lineup for the Sabres’ 10th game.

“I really didn’t know anything,” he said. “I wasn’t told anything.”

Myers added: “(Grigorenko) looks like he fits in with this team. In saying that, it’s not our decision to make that call.”

Myers had two goals, five points and was a plus-8 when the Sabres decided to keep him. Grigorenko’s still searching for his first point and is a minus-1. He’s won 47 percent of his faceoffs, more than any Sabres center.

Ruff sees progress and believes Sunday’s performance was the youngster’s best so far.

“I almost scored a goal and had a few chances to score,” Grigorenko said. “Probably I just (don’t) have a lot of experience against goalies at this level. So it’ll be harder to score. As soon as I score (my first goal) I think it’ll be easier.”

Ruff was anticipating Vanek would play against the Caps. But Vanek didn’t feel well enough after testing the injury prior to the game.

“There’s no point in playing at 70 or 80 percent,” said Vanek, who was injured Friday after getting tangled with Carolina’s Alexander Semin. “You’re not going to help the team.”

In other injury news, Leino (hip) hasn’t skated in about a week. Ruff said “progress seems slow” despite some new treatment.

“You’d like to practice a few things today,” Ruff said. “But with the schedule the way it is, you can’t. We’ve got numerous guys with muscle strains and light groins. Coming out of five games in eight nights you didn’t know what to expect. Well, now we know it’s trying to get them rested and play a game.”

Not only did the Sabres begin Monday ranked 30th overall in faceoff percentage, at 40.1 percent, they stood 5.8 points behind 29th-ranked Vancouver.

Sabres rookie defenseman T.J. Brennan, who’s yet to play this season, participated in the warm-up Sunday.

“If Van went we may have used him,” Ruff said.