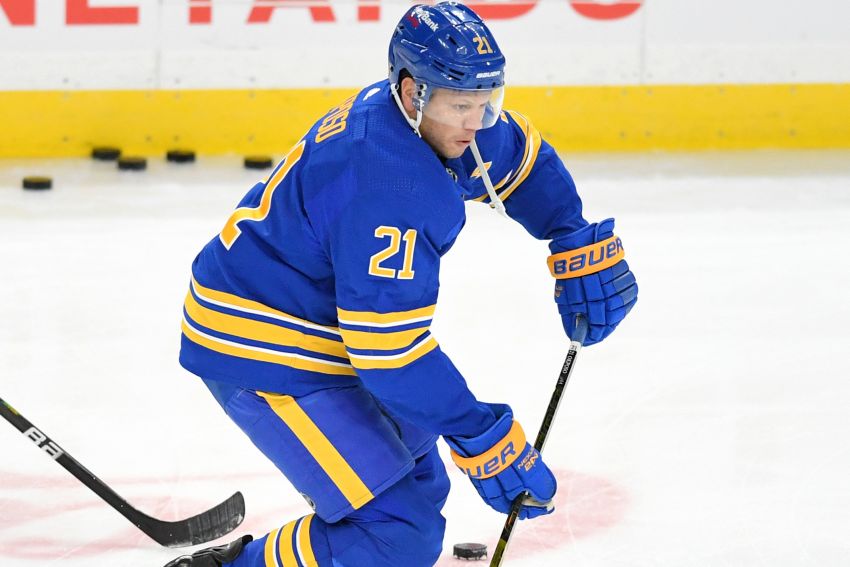 BUFFALO – The COVID-19 protocols the NHL implemented this season have stymied off-ice activities.

Wanna grab a bite to eat or check out a museum on the road? Wanna stop over after practice and play Xbox? Forget about it. Socializing is kept to the bare minimum.

The Sabres added eight new faces this season, so enjoying a team dinner or group outing would’ve helped the players become familiar with each other.

“You can’t go get to know guys on a personal level through this whole pandemic because of the protocols that are in place,” Sabres winger Kyle Okposo said on a Zoom call following Wednesday’s practice.

Those restrictions have increased the importance of practice. Okposo said the Sabres must “grow as organically as we can.” Gathering on the ice offers them that opportunity.

“If the last two days are any indication on the ice, we’ve done a really good job of that,” Okposo said of growing. “Guys are in really good spirits, guys are working hard and having a lot of fun. Everybody’s just talking like normal. We’re starting to get used to each other.”

After an eight-day COVID hiatus – nine players and coach Ralph Krueger are still sidelined – the 17 or 18 Sabres healthy enough to practice the last two days have laughed and smiled throughout the sessions inside KeyBank Center.

Okposo, captain Jack Eichel and general manager Kevyn Adams have all said they believe the adversity the long COVID break created – in a best-case scenario, the Sabres will have a 15-day break between games – could help them.

“Whether it’s playing without key players because they’ve been affected by COVID or injuries, as a group we can look at everything as a challenge,” Eichel said. “I think that a situation like this has potential to bring us closer together as a group.

“Weirdly enough, it could be a good thing if everyone gets back to 100% health. I think we can build off something like this. It’s been two weeks and it’s been, weirdly, a little bit of a reset.”

That reset started Feb. 2, when the NHL added Sabres winger Taylor Hall and defenseman Rasmus Ristolainen to its protocol-related absences list. By Monday, that number had swelled to a whopping nine. The Sabres also announced Thursday that Krueger had tested positive.

When the Sabres’ COVID problems started, Eichel acknowledged he felt “a little bit of anxiety.”

He added: “Everyone was pretty prepared at the beginning of the season for things like this to happen and … (tried) not to have too much expectation on what our season would look like because things like this were possible. I think credit to the organization that they’ve done a great job handling it.”

The Sabres’ COVID problems began after their two-game series against the New Jersey Devils. By their second meeting Jan. 31 in Buffalo, New Jersey had six players on the absences list. That number hit 10 on Feb. 1 and ballooned to 19 before dipping to 17 on Wednesday.

None of the players who spoke Wednesday – Eichel, Okposo and defenseman Colin Miller – would blame the teams or the league for the problems.

Some reports said the Sabres were concerned about playing Jan. 31.

“We were focused on getting the game underway on Sunday,” Miller said. “I think other people are going to make those calls.”

“Unfortunately, the situation hadn’t really arose yet through the league, so the league really didn’t know what to do,” he said. “And now I think that things are evolving and protocols are going to evolve and to make us safer. …

“If you don’t have the information in hand and you don’t have if X happens, then Y’s going to happen, you just have to make the best decisions that you can. I think that the league is doing that, that the Devils did that.”

The Sabres have a daunting schedule to close the season. Assuming they can host the New York Islanders on Monday, they must play 46 games over an 82-day stretch.

That doesn’t include two postponed games against the Washington Capitals that must be rescheduled. Six games have been postponed.

“It’s going to be great. I think the more games the merrier.”

Assistant coach Don Granato, who was hospitalized with severe pneumonia last season, watched practice from the stands. Adams said he has spoken to Granato about moving from behind the bench.

Peca, 46, played under Washington coach Peter Laviolette with the Islanders.

One thought on “Sabres thrilled to be back, believe they can grow from COVID adversity”