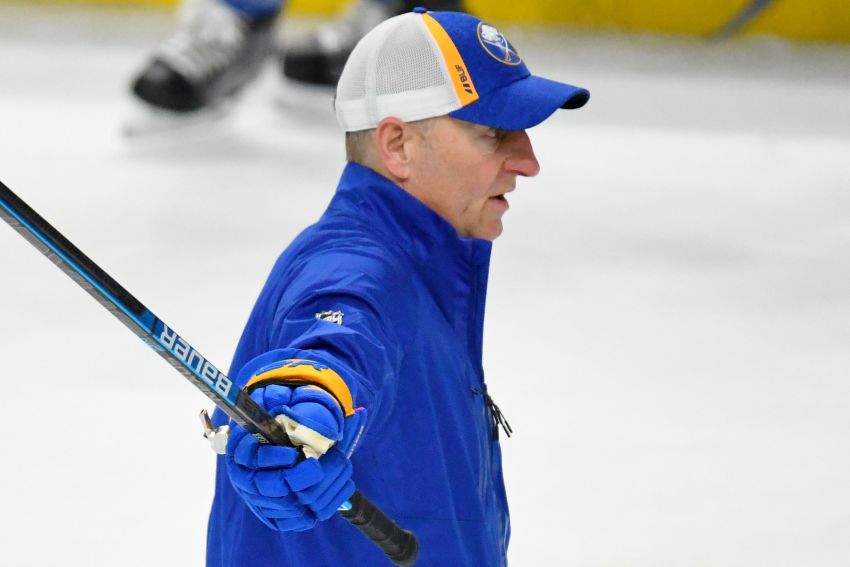 BUFFALO – Before the Sabres played the New Jersey Devils on Jan. 30, general manager Kevyn Adams said he asked Bill Daly about their opponent’s situation with COVID-19.

At that point, the NHL had placed five Devils on the protocol-related absences list. Based on the information the deputy commissioner had been given, the game at KeyBank Center was green-lighted, and the Sabres won a 4-3 shootout.

“The comfort was that we should move forward and play the game,” Adams said on a Zoom call as the Sabres practiced for the first time in eight days on Tuesday afternoon.

Prior to the teams’ meeting the next day, the league added Devils winger Kyle Palmieri to the absences list. The contest went on as scheduled, and the Sabres lost 5-3.

“Nothing had changed that I was aware of,” Adams said of the Devils’ COVID situation.

That was the last time both teams played. On Feb. 1, four more Devils went on the absences list and the NHL postponed their games that week. On Feb. 2, the NHL placed the first two Sabres on the list and postponed their next four games.

While the Devils are still paused – they have a 19 players on the absences list – the Sabres practiced Tuesday, albeit with a skeleton crew.

For now, assuming they don’t have more players put in protocol, the Sabres plan to practice today and Thursday. No one was added or removed from the absence list Tuesday.

The Sabres’ next game is scheduled for Monday against the New York Islanders.

Adams said he felt comfortable opening the team’s facilities Tuesday, just a day after defenseman Rasmus Dahlin entered protocol, because of the contact tracing and tests that had been completed.

PCT tests were conducted Monday and POC tests were given Tuesday morning.

“The original guidance was that we potentially could have practiced last night even, but we felt like let’s give this one more day to … err on the side of precaution,” Adams said.

“I feel very comfortable that he’s being looked at from our doctors and trainers,” he said.

Adams said some players are symptomatic, others are asymptomatic. Some staff is also in protocol.

Despite reports to the contrary, he did not know of any players expressing concerns about playing the Devils on Jan. 31.

“I don’t believe that anyone knew going into the game Sunday that there was any sort of change,” he said.

The natural assumption, of course, is that the Devils spread COVID to the Sabres during their weekend series. But Adams refused to say his team’s sudden problems resulted from in-game transmission.

“We hadn’t had any cases,” he said. “Our players have been incredibly disciplined. We come into a situation where, potentially, it was in the New Jersey locker room and now we are where we are so there’s certainly the ability to connect the dots.

Before Adams fielded any questions, he opened his 25-minute virtual news conference by explaining how proud he is of his players and staff for embracing the new COVID protocols this season and the discipline they’ve showcased.

“Certainly our staff’s gone way above and beyond putting every measure in place that we can to protect our players,” he said. “So I think it’s important just to tell everyone that, that I have been proud and how serious our players have taken this.”

Still, Adams wouldn’t say the Sabres are frustrated over what has transpired over the past week and a half.

“We are in an incredibly challenging situation worldwide,” he said. “This is evolving, changing, different strains. Everybody’s doing their best to manage this and keep up. I think the important part is learning and understanding what happened, which we still don’t have all the information exactly kind of how this all played out.

“And then, to me, you have to be careful with that word (frustrated) because it’s about moving forward and how do we not let this happen again? What can we do differently and what can anyone who was involved do differently, and then how do we rally around this as a team?”

Adams has been checking in with his players to see how they feel. On Tuesday, he said he sensed a relief from them to be back at the rink and have an opportunity to practice.

“I also sense an opportunity for this group to pull together and to say, ‘OK, this is challenging, this happened, it’s unfortunate, but we’re going to rally together and go to work,’” Adams said. “Part of the message to the group that I had was certainly don’t expect anyone to feel sorry for us. We have to get through this and we have to do it together.”

Only Adams spoke to the media Tuesday.