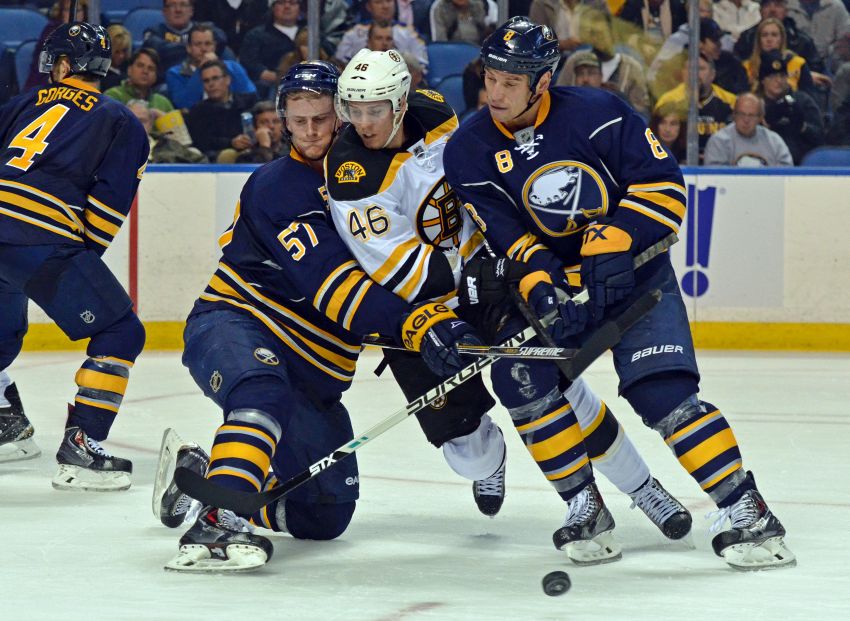 BUFFALO – For about 18 minutes of Thursday’s 3-2 overtime loss to the Boston Bruins, it appeared the reeling Sabres would steal a win from a superior opponent.

Yes, the Bruins kept pumping shots on goalie Jhonas Enroth, but the Sabres limited their prime scoring chances. The Sabres’ anemic offense, meanwhile, scored two goals for only the fourth time this season, helping them take a rare lead.

Their first regulation win inside the First Niagara Center since Feb. 28 was within grasp.

Then, like so many times this season, the Sabres collapsed. After Brad Marchand’s questionable deflection off his glove or arm tied it late, a wide-open Marchand beat Enroth from the slot 1:20 into overtime.

The Sabres couldn’t change players and got caught running around.

“I thought we played pretty well for three periods and kept them to the outside, didn’t give up too much,” said Enroth, who made 34 saves. “What happened in overtime, that’s why we’re a bad team right now.”

Sabres coach Ted Nolan added: “It doesn’t matter if you get caught tired, you still got to know where to go on the ice.”

Still, the Sabres, so vile two nights earlier during an awful 4-0 loss in Toronto, showcased a much better effort Thursday.

“There’s a couple positive things we can take from this game, for sure,” Nolan said. “The effort was there.”

Sabres winger Drew Stafford added: “The positives we can take out of this is we had a heck of a response compared to last game.”

Stafford’s first goal 5:12 into the second was also the Sabres’ first power-play goal this season in 34 tries.

“That’s something you need to take pride in,” Stafford said about the power play. “It’s just embarrassing, unacceptable to go (scoreless) this long.”

Hey, at least the Sabres, 2-8-1 this season, scored. They had been blanked in four of the previous six games and had only 10 goals.

Incredibly, the Sabres scored on two of their three second-period shots. They hadn’t scored two goals on three or fewer shots in a period since Nov. 17, 2005 against Washington, according to the Elias Sports Bureau.

“I felt we were doing a lot better job getting pucks on net, getting pucks in,” Stafford said. “The results showed during the game.”

But the Sabres, who had a franchise-low 10 shots Tuesday, only sprinkled 15 on Bruins goalie Niklas Svedberg. The Sabres allowed 30 or more shots for the 10th time this season.

“We still need to address the shots,” Ennis said.

At least the Sabres have been receiving strong goaltending. In his first start in three games, Enroth looked sharp before the announced crowd of 17,477 fans.

Enroth played six of the first eight contests before Michal Neuvirth started two of the three games in California last week. Sitting on the bench made Enroth feel “a little bit (ticked) off.”

“I thought I deserved to play the game in San Jose (on Saturday), and I wasn’t happy playing, so I had a little extra jump going into me,” Enroth said.

Enroth wouldn’t elaborate on his unhappiness.

Nolan believes “guys who don’t play should be upset.”