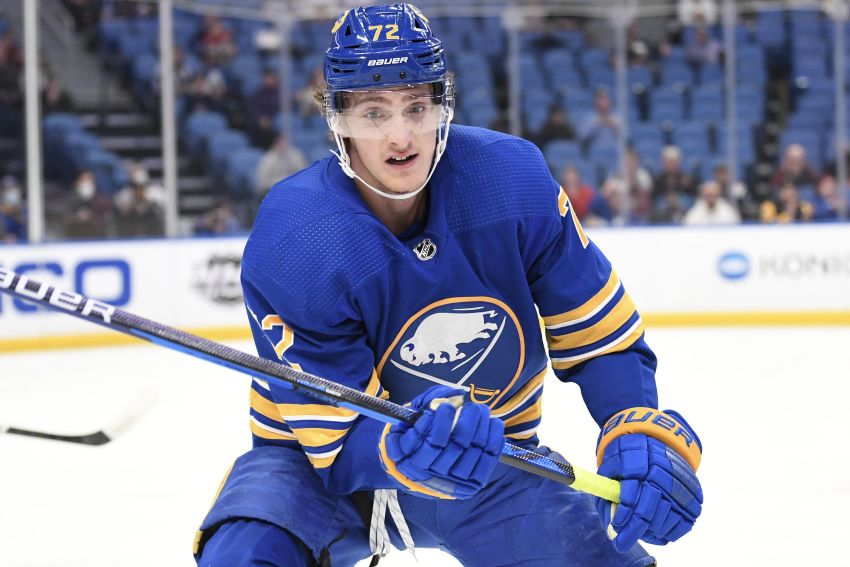 Much of the pregame talk leading up to Friday’s 5-3 loss to the St. Louis Blues surrounded center Tage Thompson and his emergence as the Buffalo Sabres’ most lethal scoring threat.

Thompson, 24, played 41 games for the Blues in 2017-18 before they sent him to Buffalo in the Ryan O’Reilly trade following that season.

The American, the 26th overall pick by the Blues in 2016, left St. Louis a raw, skinny kid and returned Friday for the second time performing like a star.

Thompson’s tying power-play score 12:34 into the third period at the Enterprise Center was his team-leading 21st goal. It was also the eighth and final shot on goal of the night.

Fresh off Wednesday’s 4-0 loss to the Montreal Canadiens, Thompson’s goal looked like it could propel the Sabres to an upset win or at least help them reach overtime.

But at 13:57, Colton Parayko scored, knocking Jordan Kyrou’s rebound out of the air as he charged to the net. Sabres center Casey Mittelstadt’s turnover started the play.

Despite suffering their fifth straight loss, the Sabres took some positives out of Friday’s setback.

“We just gave them a couple too many chances and they capitalized on them,” Sabres winger Kyle Okposo, who scored in the second period, said on a Zoom call. “But I thought that we were the better team for the majority.”

Sabres coach Don Granato had some players under the weather in Montreal. Following a day off, he said his team “had way better energy tonight.”

“We executed, we were sharper, we were much better and gave ourselves a chance to at least get a point out of that game,” he said.

Thompson added: “The way we competed, the way we responded, I don’t think anybody was happy with the way we played in Montreal and I thought that was a really good response tonight. Coming out right from the drop of the puck to the final whistle. I think that’s the consistency we need.”

Center Dylan Cozens scored the Sabres’ other goal 1:26 into the game.

Sabres goalie Dustin Tokarski made 18 saves, including a scintillating skate stop on Brandon Saad a second before Walman’s goal.

2 thoughts on “Sabres take Blues to wire but lose: ‘We were the better team’”